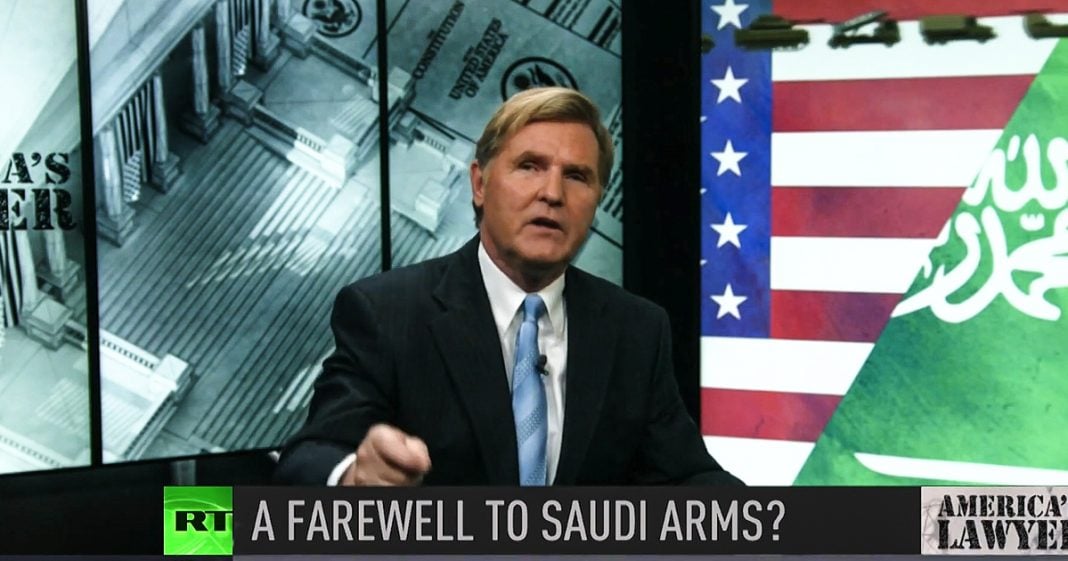 Via America’s Lawyer: Democrats and Republicans in the Senate are teaming to stop a multibillion dollar arms deal that the Trump administration made with Saudi Arabia, of all places. Mike Papantonio explains more.

Finally tonight, some good news. Democrats and Republicans in the Senate are teaming to stop a multibillion dollar arms deal that the Trump administration made with Saudi Arabia, of all places. Both parties agree that sending billions of dollars worth of weapons to one of the worst actors, the very worst actors in the Middle East would be a disaster and they’re working on different ways to stop the deal from happening, hopefully.

Senators Chris Murphy and Todd Young have requested that the Senate, the State Department, put together a comprehensive list of all Saudi Arabia’s human rights abuses, which they want to use to stop the arms sale. Senators Lindsey Graham and Bob Menendez are working on legislation that would halt the arms deal. However, Secretary of State, you got it, Mike Pompeo says that the, that Trump is prepared to declare a national emergency to go through with this crazy insane deal with these crazy dictators in Saudi Arabia.

The United States has to stop pretending that Saudi Arabia is our ally. They aren’t. Look at 9/11. evidence shows that the country has been selling weapons to terrorist groups, weapons that the US actually sold to Saudi Arabia. And then you combine that with their horrid record on human rights, it makes for a really ugly situation. These arms deals need to be stopped now and with broad bipartisan efforts to present, to completely prevent the sale of weapons, there’s a good chance we might prevent even more atrocities in the Middle East if we do that. Let’s hope.

That’s all for tonight. Find us on Facebook @facebook.com/rtamericaslawyer. Also follow us on Twitter @americaslawyer. You can watch all RT America programs on Direct TV, channel 321 in stream live to your youtube.com/rtamerica. I’m Mike Papantonio, and this is America’s Lawyer, where every week we tell you the stories that corporate media is ordered not to tell because their advertisers won’t let them. Have a great night.