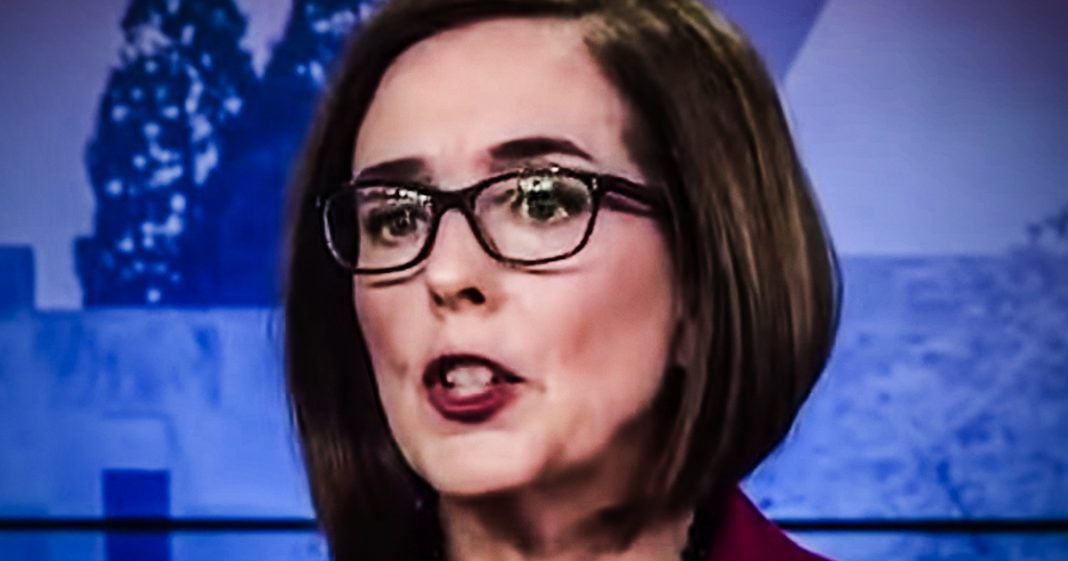 Oregon Governor Kate Brown is sick and tired of Republicans in the state legislature refusing to do their jobs, and earlier this week she ordered police officers to start rounding up the Republicans who skipped town in order to bring them back for a vote on a cap and trade bill. The Republicans fled the state in order to stall the vote, but Governor Brown isn’t having it. Ring of Fire’s Farron Cousins discusses this.

Well, most of the country has been kind of laser focused on DC this week. We’ve got a lot of Democrats out there sniping back and forth. We’ve got the president, uh, trying to launch a missile strike against Iran based on faulty premises. And then we’ve got all kinds of other shenanigans happening with members of the House of Representatives. But we need to look west because there’s actually something really interesting that’s been taking place in the state of Oregon this week. Here’s what happened. Earlier in this week, the Oregon state legislature was going to vote on a cap and trade bill. The Democratic controlled State House had already passed it and the Senate was set to vote on it and then it was going to go to governor, a Kate Brown’s desk, Kate Brown as a Democrat. She was going to sign it in Oregon and was going to be the second state in this country to have cap and trade policies in place while the Republicans in the state Senate didn’t like this idea at all.

They didn’t want to hurt the oil developers, those poor fossil fuel billionaires know. So what they did was they left. Many of them actually left the state because though Republicans do not have a majority in the Oregon State Senate, they do have enough for a quorum so they can stall any progress in that Senate by simply not being there. And that is what they did. They left the state so that they couldn’t vote on cap and trade. But Governor Kate Brown is tough. I like her. I like what she did here. The Democrats in the Senate decided to, uh, ask her permission to get the state police to go around and essentially arrest these Republican senators, drag them kicking and screaming back into the Senate and force them to vote. And Kate Brown said, you know what? I like that idea. Let’s do it. So earlier this week, Kate Brown did authorize state police to go around and gather up these, a truant Republican senators and force them to come back in.

Now they have not all returned yet. And part of the reason might be because these state officers are afraid that these Republicans are going to murder them. And I don’t say that lightly because that is exactly what Senator Brian Boquist Republican for the state of Oregon implied. He said, this is what I told the superintendent. You send bachelors and you come heavily armed. I’m not going to be a political prisoner in the state of Oregon. It’s just that simple. So this jackass wants a shootout. I’m not going to be a political prisoner. You are elected to be a politician. You idiot. This is part of your job. If you’re not willing to do it, then resign immediately. But you don’t threaten saying, don’t send anybody who I’m going to feel bad about killing because they have a wife or children and they better have more guns than I have.

Yeah. This guy needs to be surrounded by police for a whole different reason than going in to cast a vote. And I hope that that happens. You actually can’t threaten a law enforcement officer in the United States. You can’t. That’s not legal. But that is exactly what this man just did here. So hopefully Kate Brown takes the extra step of once Mr. Boquist gets back to the Senate, she has a different set of police. Say, you know what? All we’re going to go ahead and take you away because you’re going to face felony charges for threatening officers because that’s what needs to happen. And given how tough she’s been so far, I wouldn’t be surprised if Kate Brown did just that.