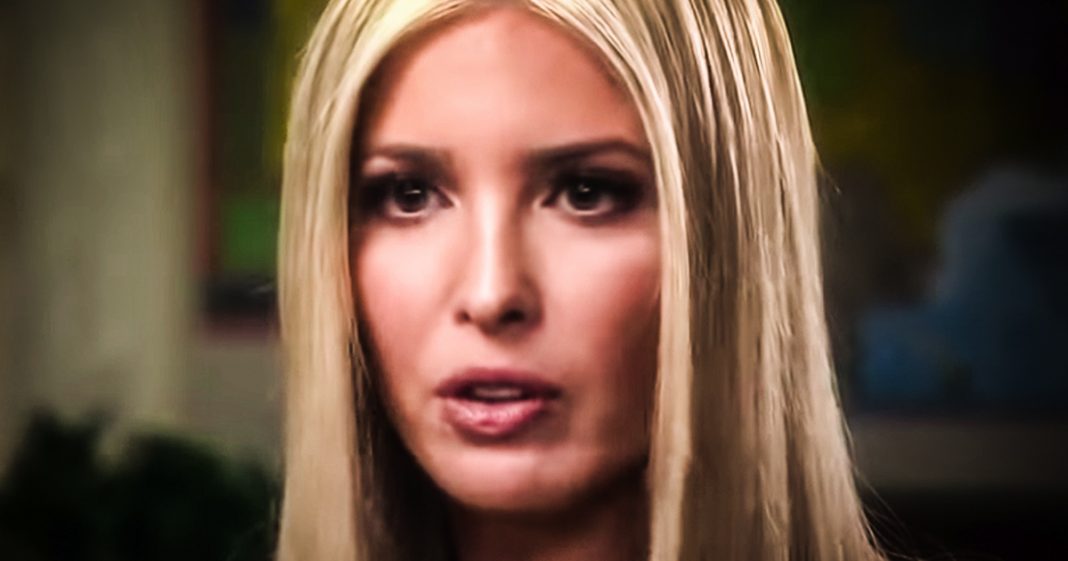 A government watchdog group has filed a complaint against Ivanka Trump for allegedly violating the Hatch Act on multiple occasions. Ivanka has repeatedly used her Twitter account to push her father’s campaign, and since she is an employee of the White House, that is expressly forbidden. Ring of Fire’s Farron Cousins discusses the issue and explains why we shouldn’t get our hopes up about Ivanka being punished.

Ivanka Trump has now become the latest Trump administration official to receive a complaint from the watchdog organization, Citizens for Responsibility and Ethics in Washington for allegedly violating the Hatch Act. This complaint from CREW has now been sent to the office of special counsel with CREW asking them to please investigate this matter the same way they did with Kellyanne Conway. And here’s the thing, here’s what CREW is, is saying happened two days before Donald Trump’s Orlando rally. Uh, Ivanka Trump got on her official Twitter account and tweet it out. A tweet that included the phrase, make America great again. Make America great again is actually a campaign slogan that is specifically endorsing a candidate, which according to the Hatch Act, Ivanka Trump’s a white house official that is illegal. So this is pretty cut and dry. It’s very obvious that yes, she violated the Hatch Act here. CREW was correct in their analysis and I’m sure the office of special counsel is eventually going to come to the same conclusion.

The question is, what’s going to happen? And I think we all know the answer to that. Absolutely nothing. And that’s the disgusting part of this story because we have seen far too many people within this administration just blatantly ignore the rule of law specifically. In many instances, the hatch act, and I know a lot of people watching this may think, okay, well that’s not even that big of a deal. Right? Okay. So she tweeted out, make America great again, or Kellyanne Conway and endorsed Jeff Sessions over Doug Jones back in the day. It may not seem like a big deal to you, but it is written into the laws for these people for a reason. And whether you agree with it or not, that’s the rule. You have to follow it. It is not optional. And that’s the problem. These members of the Trump administration, which now apparently includes Ivanka as well, believe that the law is optional.

They have lived their lives free from any kind of consequence, and that’s what Donald Trump brought to Washington DC because he is the exact same way. Never had any real consequences, continuously failing upwards, getting into positions that he doesn’t deserve yet somehow managed to get. And Ivanka Trump is following in her father’s footsteps. Hopefully something does come of this and hopefully the office of special counsel comes out and says, Yep, you know what, Ivanka, you did violate this. We found a couple other instances. We recommend your termination from the White House. Donald Trump’s obviously not going to fire his own daughter, not a, especially considering it’s one he finds so attractive, he probably likes to have her around, but that doesn’t change the facts in this particular matter. You know, I remember, uh, you know, like I’ve said, we’ve done this for a very long time. Back in 2005, 2006 news broke that Karl Rove had violated the Hatch Act. He was using official government computers to send out campaign emails. Now that is a much more severe violation of the Hatch Act. It was big news. Everybody talked about it and it was around for several months and then rove resigned and all that. But, but nonetheless, back then it was a big deal. But nowadays there was like, Oh, what does it matter what matters? Because that’s the rule. That’s the law. And these members of the Trump administration repeatedly and continuously are flouting the rule of law because they’ve never had to face any kind of consequences in their lives.