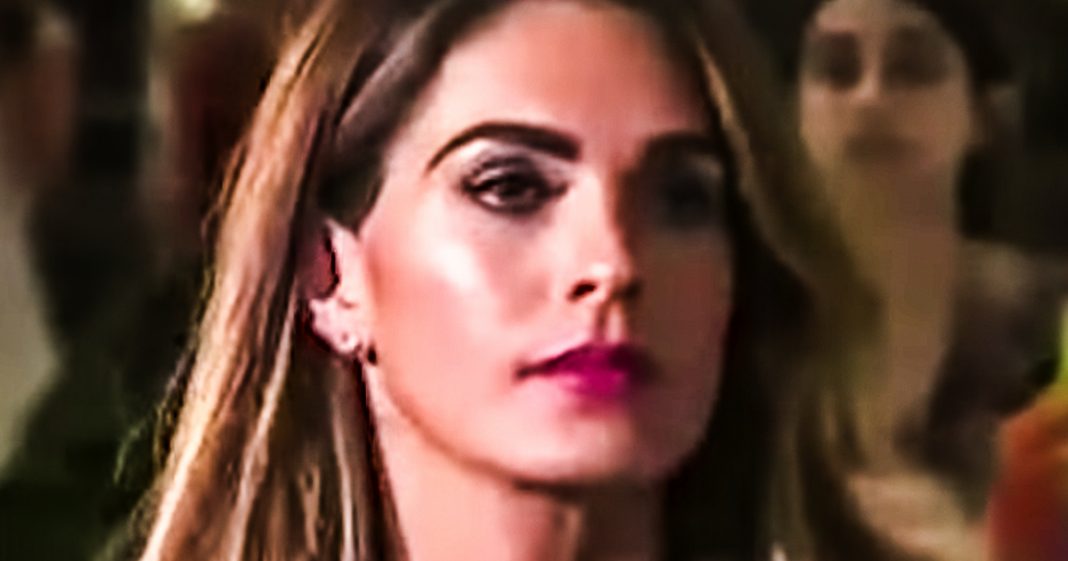 During her closed door testimony to Congress earlier this week, former Trump comms director Hope Hicks told the panel that Trump was being completely serious when he claimed that he would accept foreign help to win an election. The only question now is how much more information does Nancy Pelosi need before she FINALLY agrees to start an impeachment inquiry? Ring of Fire’s Farron Cousins discusses this.

Well, the transcript from Hope Hicks closed door testimony from Wednesday is now available. And even before we got this transcript, we found out from representative Jerry Nadler that Hope Hicks admitted that Donald Trump was not joking around when he said that he would gladly accept foreign aid to help win an election. And in fact, he was quite serious about that according to what Hope Hicks said behind closed doors, which we can now verify with the official transcript. Uh, she also on 155 different occasions during that testimony, refused to answer the panels questions. But that’s a story for a different day. What’s important now is that this woman who worked closely with Donald Trump, even before he became president, who knows him very well, admitted that yes, Donald Trump is willing and ready to accept foreign aid in order to win an election, even though he knows that it is illegal to do so, that doesn’t seem to matter to him. He’s willing to do it according to Hope Hicks testimony. So the only question we have now is, what in the hell is Nancy Pelosi wedding for? Right? Is she waiting for Donald Trump to actually launch a war against Iran before she says, okay, maybe we can go ahead and start impeachment. I guess if you guys are going to keep bothering me about it, we repeatedly see members of this administration break the law. Kellyanne Conway, Ivanka Trump, Jared Kushner, uh, Ben Carson, Betsy Devos, Elaine Chao. I mean come on.

Donald Trump is the worst of them all and here we have one of his former confidants and meeting that, yeah, if somebody offers him aid, he’s going to take it and that is illegal and that’s why we basically had the entire Mueller investigation to begin with to see if that has already happened. So Pelosi what are you waiting for at this point? You have enough evidence to at least start the inquiry where you will then gather more evidence and be able to remove this man and Hopefully many other members of his administration once he is gone. I don’t think a lot of these folks are going to stick around if we remove Trump from office. Certainly not Ivanka Kushner and Kellyanne. That’s what’s at stake here. It’s not just the presidency and I know all these people, but then we get Pence. I know that I’m not an idiot and I know Pence is just as bad on policy, but what we should just leave the, the, the law breaker in the White House because you don’t want Mike Pence.

Nothing’s going to change politically except maybe some of these other a rule breakers are also going to be sent packing, maybe even with as awful as Pence is, we restore a little bit of dignity to that office and not to mention the icing on the cake here. I think any Democrat running for president right now would easily demolish Mike Pence and a 2020 election. Why are you folks not thinking about that? Because that to me seems like a really a big issue that should play in favor of impeachment Mike Pence and beaten anybody on the democratic side. So then we don’t have to worry about voters thinking we have to play it safe by nominating a centrist. We can go all out. We can get the most progressive, furthest left person out there who’s going to enact radical change that this country desperately needs. It’s a win, win, win, win, win situation here. And Nancy Pelosi is the one standing in the way, even though to many people close to Trump and hell, even Trump himself have admitted that they have no problem breaking the law. It’s time to stop playing around with this issue and begin an impeachment inquiry today.