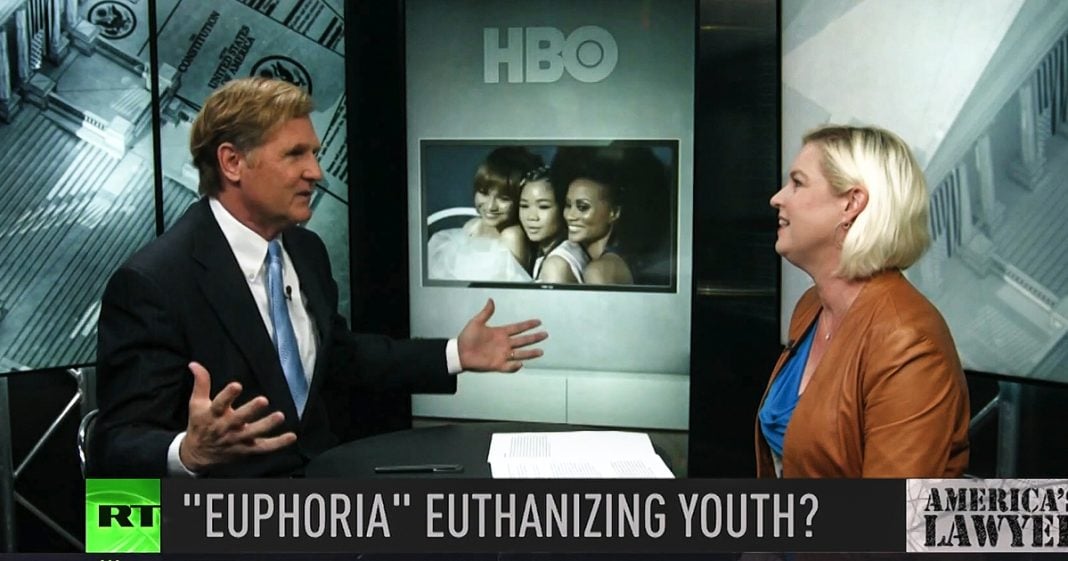 Via America’s Lawyer: Mike Papantonio is joined by legal journalist Mollye Barrows to give their take on HBO’s new teen-centric series “Euphoria.” It’s already caused a stir over its graphic depiction of sex, violence, and addiction among Generation Z. Is this portrayal authentic, or intentionally provocative to keep more mature audiences riveted?

Mike Papantonio:             This Sunday, HBO debuted its new teen centric series is what we’ll call it, Euphoria, which explores things of sexual violence and drug addiction through the lens of today’s high-schooler’s, supposedly. It premieres and it’s premiere has rocked the landscape because for a lot of different reasons, we’re going to talk about. Many reviews are heralding the show for, for continuing to push the envelope by exploring dark, dark themes. Others, however deeply troubled by the show’s grim portrayal of youth culture and characterize it as a gross misrepresentation of general, of generation z. Is it, a generation of hedonistic good for nothings. So does Euphoria seem authentic to you? I gotta tell you, I gave it a shot. I looked at it, I watched it. Here’s, here’s my…

Mike Papantonio:             The Parkland kids. They’re out, they’re out in the streets protesting the right things.

Mike Papantonio:             I mean, I don’t know where these kids on Euphoria live. They live in California. I don’t know. You Watch this show and you go there, they’re drug crazed sex addict, you know, name it, name it. And that’s what’s wrong with them. According to Euphoria. I would like, who’s, who’s the producer on this? I’m sure…

Mike Papantonio:             If you look at this show, this is nothing except HBO trying to squeeze out another dollar.

Mollye Barrows:                They were talking about a generation of good kids and it’s interesting because this is actually a show that came from Israel. So they redeveloped it for the American market. He wrote it based, he said on his own experiences growing up in high school that these were some of the addiction issues that he saw with numbers of his peer group and maybe you know, he is the son of a director, so maybe he grew up in a more affluent society circle of friends where they had more access to drugs, maybe more money, some sort of excessive partying. I’m just trying to be the devil’s advocate.

Mike Papantonio:             No, they’re all stoned. And here’s the point again, I always brag and I don’t have a generation z’er, but I know a lot of them. They’re really good kids. They’re involved in the community. This generous, this show Euphoria is just nothing but a bunch of hype garbage where HBO is trying to squeeze out another dollar. Why? Because they had to loose, the, the, you know because…

Mollye Barrows:                And HBO has a new boss, AT&T, and they have essentially said, we want to see more programming that’s geared towards viewers who want to watch it online, who want to stream it. They want to compete in that market. So who are they going to be, you know, marketing that too? Well of course it’s going to be younger viewers because that’s who’s watching a lot and we all are, but streaming is definitely appealing to the younger crowd, the younger audience.

Mike Papantonio:             Because these generation z ain’t buying into it. If you look at the numbers on generation z, drug addictions down, alcohol use is a down, gratuitous sex is down. This is…

Mollye Barrows:                Well it is and I agree with you on that. So going back to your statistics, they did say that like half of all the kids by the time they’re at 18 in America have had sex. But when you break that down, most of them were in relationships, if you will. And, and it’s not the sort of image that’s being portrayed on Euphoria where there’s just this willy nilly hooking up with same sex friends, opposite sex friends, you name it, whoever’s in the room, whoever’s got the pills or whatever, but…

Mike Papantonio:             Okay. Good for him. He grew up, he grew up with his eggs totally scrambled and, but I’m looking at and comparing what I’m seeing on Euphoria with what I see out with that generation, and it’s, when people drill down on this, you know what it’s really about, it probably isn’t even kids watching it. Because it’s this gratuitous, as I say, it’s this gratuitous sex. It’s, it’s appealing to some couriering, couriering interests of some old cat who’s watching.

Mike Papantonio:             Okay, the pervs are watching it and they’re also showing it to kids and saying, hey, maybe this could be your life. Maybe you could be a drug addict who’s completely out of…

Mollye Barrows:                It has gotten a little bit of critical acclaim. People are saying, at least it’s bringing to light some issues that teenagers feel like they’re struggling with. But I’m with you. It’s an artsy take on a grim and grizzly sort of over the top eccentric look at that. But you know, when it came out, it only had like less than 600,000 viewers and but streaming. Yeah, they did it like up around the million. So you’re right, it’s the pervs that are out there online watching.

Mike Papantonio:             It’s the pervs. Mollye, thanks for watching. Thanks for talking about, I want to talk about this more as we watch more serious.