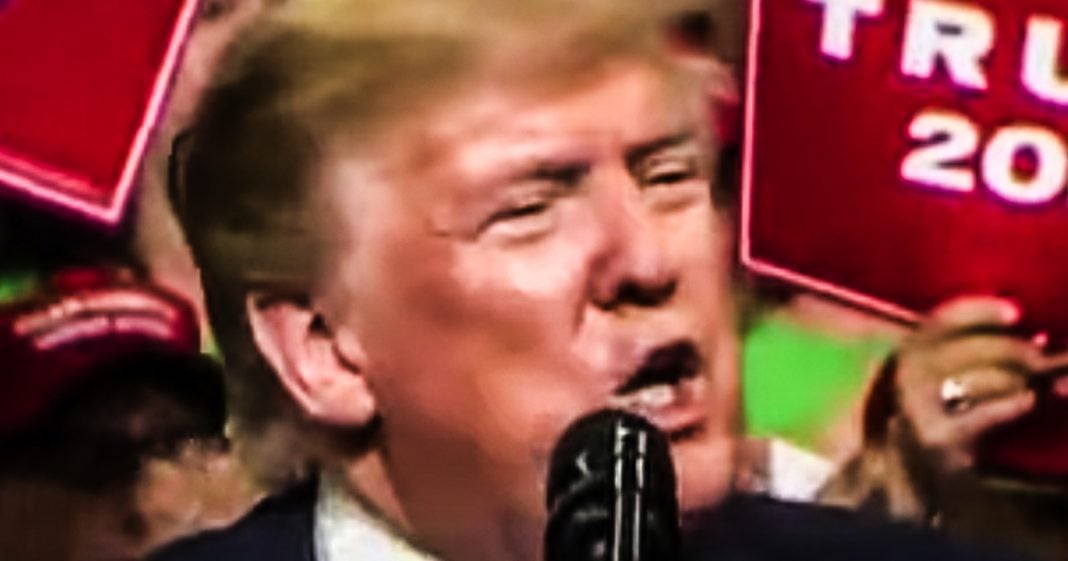 During his Tuesday night disaster rally, Donald Trump told the crowd that he was able to do what no president in 44 years could do, and that is to expand healthcare to veterans like never before. The only problem is that the bill he’s talking about was actually passed and signed into law during President Obama’s tenure (in 2014, to be exact.) But will that crowd ever know the truth, or are they going to just assume that he’s doing things no one else has done? Ring of Fire’s Farron Cousins discusses this.

Donald Trump loves to say that he has accomplished more than any other president in the entire history of the United States and on Tuesday night during his little hate rally down there in Orlando, he took some time to tell those angry people in the crowd exactly one of his biggest accomplishments and that is passing VA choice. Here is exactly what Donald Trump said. He said, we passed VA choice. You go out now you get a doctor, you fix yourself up. The doctor sends us the bill, we pay for it and you know what? It doesn’t matter because the life and the veteran is more important and we also happen to save a lot of money doing that. They have been trying to get that passed also for about 44 years. Crowd went wild. Donald Trump is finally taking care of veterans by getting this law passed. The only problem is that this, this was actually signed into law in 2014 so if you were to go look at that bill, you’re not going to see Donald Trump’s signature on the bottom of it because he wasn’t president. The signature that you’re going to see is Barack Obama. Obama did this, that thing that Donald Trump is saying that he did that. Oh, everybody for 44 years failed to do. Yeah, Obama did that. That that’s his accomplishment. He is the one who helped start fixing the Va. Donald Trump did put his name on a VA bill, and that bill basically says, if you have to wait longer than 20 days, you can go find a different doctor

that, that, that’s what he did. Obama was the one who said, yeah, go find an independent doctor. We’re cool with that. Send us the bill. We’re going to take care of it. No worry about it. We want you to get better. And Trump just said, well, if you find a doctor, you got to wait a couple of weeks, I guess you can find a different doctor. That’s, that’s the extent of Trump’s bill. Obama’s the one who did this. Now here’s the problem though. Nobody in that crowd understands that and I guarantee you, even the people who went in there knowing that Obama signed that bill, they probably left thinking, oh, we’ll find news. Trump’s accomplishment though, and that’s the problem. The media in this country sucks so hard that this little lie that gets told to these people and they repeated on Fox News repeated through Breitbart and Daily Caller and all the other little a common go talking heads that the right has right now they’re going to say the same thing and that lie is going to spread like wildfire and suddenly trumps the hero of the VA even though we didn’t do anything.

Obama did that, but we don’t have a mechanism in place and we don’t have a leftist media on the television to go out there and combat this lie and confronted and say, well, hold up dude. Not True. I mean, are we going to have a debate moderator once we get to the actual presidential debates that calls him out on this crap? Because if we don’t, this man sail in through to reelection, you have to call him on his BS. I don’t care if you’re in the middle of a rant about how bad Russia is, take a minute to step aside and say, oh, by the way, while we’re here, let me go ahead and point out a few lies of the presidents and let me give you the actual truth instead. But no, it’s all sensationalized. It’s all breaking news graphics across the bottom, and that’s why whether they consider themselves left or right or center or whatever, the corporate media sucks. Calling out these lines should be easy. Correcting the record for the American public is the job of the media, but even groups like MSNBC seemed to have forgotten that many, many years ago, and if we don’t combat these lies, if we don’t fight them at the source, then within a week or two, Donald Trump is going to become the hero of the VA, even though he’s not the one whose name is on that bill.