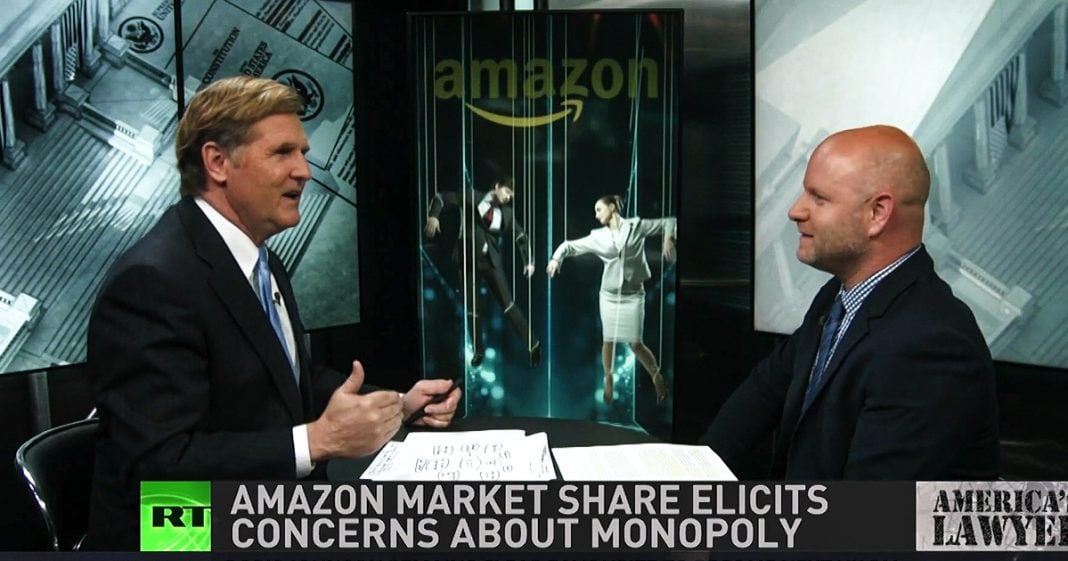 Via America’s Lawyer: Mike Papantonio and Trial Magazines Editor Farron Cousins break down the virtual monopoly Amazon now enjoys, given that nearly HALF of all online purchases in the U.S. are now placed through its all-encompassing marketplace. Beyond online retail though, Amazon CEO Jeff Bezos has expanded the company’s reach to TV streaming, pharmaceuticals, and even brick-and-mortar stores.

Mike Papantonio:             There’s no part of your daily life that Amazon and Jeff Bezos aren’t trying to become a part of. Whether it’s your retail shopping, your grocery shopping, entertainment, news and even the government, Amazon and Bezos are there. The company’s grown far too powerful and they, they, they need to be broken up. And I have Farron Cousins with the trial lawyer magazine to talk about that. Farron until you, by the way, this article that was done, the source of what we’re going to be talking about was superb.

Mike Papantonio:             As a matter of fact, we interviewed this, this man many, many times, and every time he comes through with a research article like that, it’s great stuff.

Farron Cousins:                  Absolutely. David Dayen does a phenomenal job of laying this out. And it’s something that, you know, before seeing this, we had talked in the past about Amazon’s here, Amazon’s there. But, but Dayen really connected this giant horrifying web of Bezos and Amazon that most people don’t even understand exists out there.

Mike Papantonio:             Well what Dayen did, he explains how we’re just completely puppets controlled by a massive puppeteer named Jeff Bezos. And if, so here’s what he does. And, and this was when I found answers thing is I was reading this story, we’ve done independent stories on virtually everything that he talked about.

Farron Cousins:                  Oh, absolutely. And Dayen, you know, sat there, he looked through the numbers and looked through other reports and basically every time an online commerce gains one percentage point of total commerce. So right now, I think Amazon’s at about 16% of ecommerce every time that goes up by 1% 8,000 brick and mortar stores in the United States close down. So every time Amazon gains one more point of that market or online commerce in general, 8,000 brick and mortar stores around this country will close their doors, all their employees suddenly without a job. And it’s because Amazon is growing at this exponential rate, getting government contracts to help their growth.

Mike Papantonio:             Okay, let, let me talk about this. Just, just let me slow this down just so I think that people watching can better understand what’s at, what’s at risk here. So you talked about the numbers with every point we lose x number of jobs, eight thousand, eight thousand for every point. They’re at 16 points right now, right? That keeps increasing every year. And, and you know the reason this company has been described by people that are in the commerce business as the Death Star. Do you remember the, you remember the issue with Walmart? Walmart comes to town, they build this new entity, a Walmart superstore, and virtually everybody around them within 15 miles that does the same thing, sells the same product is out of business.

Mike Papantonio:             This is even worse. We’re not even talking about bricks and mortar. We’re talking about an American public that has become secluded in the way they shop. They don’t want to leave home. There’s an issue right there. I mean, no longer a community of shopping. Don’t show up at a mall and go to this store and that store, you simply go online and most of the time, you’re going to end up going to Jeff Bezos. So here’s, here’s where the rubber meets the road. We know Joe Biden, okay, Joe Biden supports all that. Joe Biden will not touch anything having to do with antitrust.

That’s a story you did a couple of weeks ago. We know Joe Biden has committed himself. We Know Elizabeth Warren has said, heck no, we need to do something about this now. We need to break up these people. Just like we did the railroad tycoons, right? So what, where does this land politically? I mean you’ve got the, you know, you’ve got the Democrat Wall Street types that love this. Democrat, Democrat Wall Street Democrats love this and Warren’s out there saying, eh, I don’t know this is a bad problem. What’s you take?

Farron Cousins:                  Well right now actually you have both Warren who says we’re going to break these up and not just Amazon. You know, Facebook and all these other social media companies that are basically doing the same thing on a smaller scale right now. But they’re headed down the same road as Amazon gobbling up everything. And then you have of course Bernie Sanders, who he is the one together with Ro Khanna last year who basically forced Amazon through this public shaming to raise their wage to $15 an hour and give everybody better benefits. So those two candidates are not, you know, buying this Jeff Bezos should be super wealthy crap.

Mike Papantonio:             Let see, let me, let me go one more topic here. We got, we just got to cover. Okay. We, you and I did a story a few weeks ago where we talked about how have Amazon, Facebook, you name it, all of the big tech companies are figuring out how we go about shopping and how much we will spend. Right? Amazon has developed, has developed something called personalized pricing. Talk about that just a minute.

Farron Cousins:                  Yeah. This is, this is something that’s absolutely disgusting here too, and it also ties in with all these devices you have in your home that you know, you ask it like, eh, you know, Alexa, order a pizza. Alexa, look at this. So it, it gathers your info. It sees what you typically spend, the things you usually buy and it will start to change the prices on you a little bit. Maybe this is something, this person orders a lot, so we’re going to slowly increase it, not tell them when they’re ordering it with via their Alexa device. They just suddenly it’s $5 more than it was last month, $10 more, whatever it is.

Mike Papantonio:             How much more affluent are you or economically able to spend x number of dollars than the person down the road and then they play to your pricing. They may charge you 3% higher than they do somebody down the road, because you can pay it. That’s where we’re headed. And Elizabeth Warren seems to be the only candidate with enough brains to talk about how dangerous this is. Joe Biden is embracing all this, very scary thing.