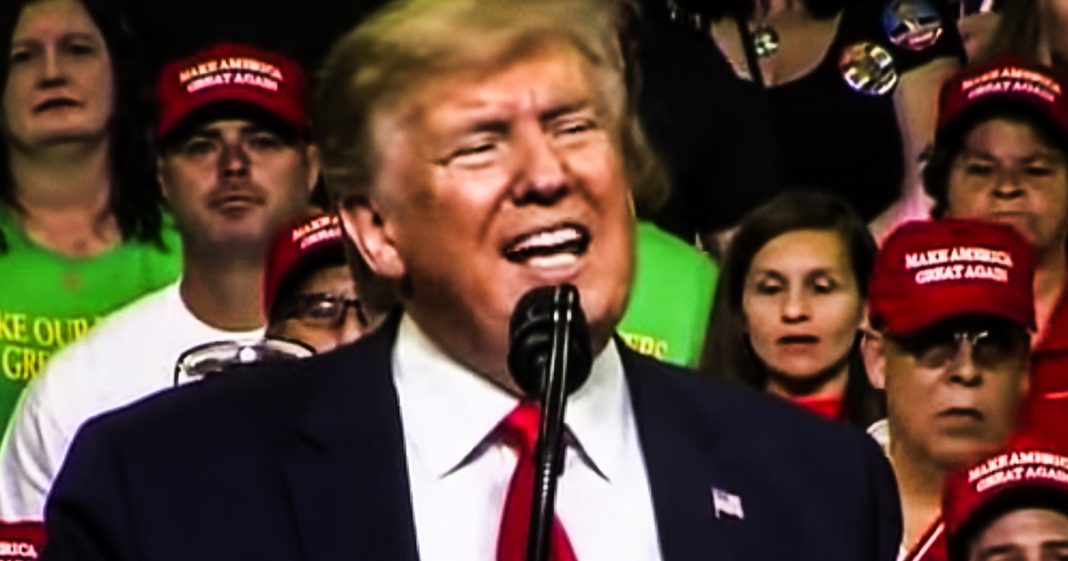 Donald Trump clearly believes the polls that show him losing in 2020, and his pledge this week to begin deporting millions of immigrants from our country is proof of it. He needs a way to shore up his base, and he believes that this is going to be the issue that does it. But the truth is that most Americans believe immigration is a benefit to our country, which it is, and mass deportations are going to have disastrous consequences on our economy. Ring of Fire’s Farron Cousins discusses this.

The last week or so, I’ve been pointing out how horrible Donald Trump’s poll numbers are right at this moment and he refuses to believe that there are this bad, and I said, if he does believe his poll numbers are that bad and he’s going to lose 2020 he’s going to do something horrible. He’s going to do something drastic to try to shore up his base and lo and behold, a week later, it was proven correct. Donald Trump announced earlier this week that he is going to begin mass deportations. Millions of immigrants here in the United States are going to be deported according to Donald Trump. That is what desperation looks like. There’s no particular reason for him to send ice agents all around to start rounding up millions of immigrants and deporting the amount of this country. But he’s doing it because he’s terrified. He’s terrified of losing the 2020 election, which again, as of right, this second poll show would happen.

That’s going to change up and down constantly until we hit the election. But he is freaking out about it because as much as he said they were fake polls, part of him actually does believe that he is in trouble. So what’s he gonna do? He’s going to shore up his base. Those hate filled little Maga hat wearing freaks out there. Love when Brown people get kicked out of this country, and that’s what Donald Trump is going to do. Not because it’s legally necessary, not because these people are criminals, not because they’re out, they’re harming anyone or stealing money or taking money from the federal government, but because he needs to shore up his base. That is what this is about. And it’s because Donald Trump has failed with his signature policy, which was immigration. You know, he told these same people that, look, we’re going to stop the flood of people coming across the border.

We’re not going to let them take over our country. We’re not going to let white people become the minority. He didn’t specifically say that, but other members of that alt right community have Tucker Carlson has hinted at that and that’s why he’s doing this to say, hey, we’re, we’re banking it ride. I’m keeping my promise. Democrats want open borders, but I want to send people back over it. And that’s going to be the rallying cry that he’s going to continue whining until the 2020 election possibly even after that, regardless of whether he wins or loses. But this is what desperation looks like. This is what weakness looks like. Trump knows he can’t win on the issues. He knows he’s not going to become more likable as a human being in the next year and a half. So the only thing he knows how to do is to start rounding up immigrants and sending them out of the country to make his base a little happier.

People like Ann Coulter will love this idea because that’s the only thing they love is hating others. But you know who’s not gonna like it. Most people in this country, the normal people in this country, because vast majorities of people here in the United States say that immigrants are a net good for the United States, that they’re not coming over here to harm other people or to live off our government like a lazy Mooch. They’re coming over here to work. They’re coming over here and paying taxes, paying property taxes, local school taxes, all of that sales tax study after study proves without a doubt that immigrants are a net good for this country. So even regardless of what people think, the evidence shows that yes, they are good for this country, but if Trump actually follows through on this promise, which at this point we don’t know if he’s going to, it’s going to be a disaster, not just for these human beings, but also for the U s economy because we’ve already seen what happens when Donald Trump cuts down on the number of work visas that are handed out every year farm start losing money because they can’t find people to go out there and pick the crops.

Factories start losing money because they can’t find people to work. The assembly lines, the clothing lines, whatever it is. We need immigrants here in the United States. Believe it or not, folks, our economy is entirely dependent upon them. And if we lose that one piece of our economy, that whole house of cards comes tumbling down. And I think there’s too many people on the alt right who don’t seem to understand that right now. But that is exactly what’s going to happen. But of course there is a little bit of good news and the good news is that Donald Trump is unlikely to fulfill this promise a number one because I simply doesn’t have the manpower to do that. But number two, because this man lies about every single thing. Remember he told us he was going to entirely shut the southern border. That didn’t happen. He said he was going to ship a all these immigrants to Democrats. Cities never happened. Said he was going to tear up the hell out of Mexico. Hasn’t happened yet because allegedly there’s a deal only to find out that Mexico tells us. Yeah. There there is no deal yet. Just an agreement to meet in the future to actually talk about making a deal. That’s the deal, by the way. So we don’t have much reason to believe that Donald Trump is actually going to follow through with this, but if he does, trust me, it is going to be an absolute disaster for the United States.