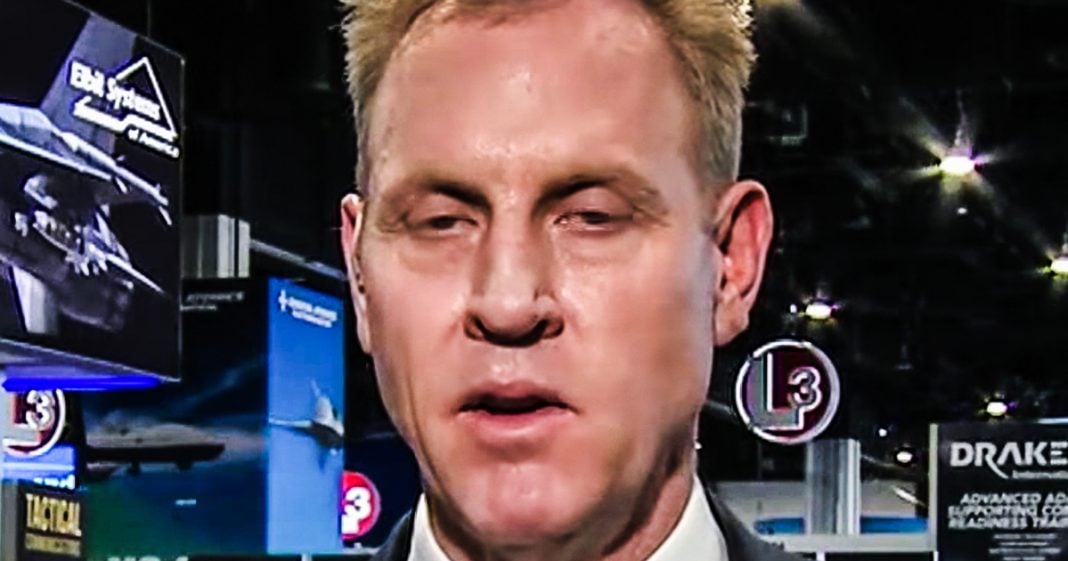 The United States is trying to build a case for a war against Iran, and that is going to be even harder for them now that we don’t even have an acting Defense Secretary. Patrick Shanahan, the former Boeing executive who Trump nominated for the position, has withdrawn his name from consideration after it became apparent that the whole country would learn that he abused his wife several years ago. Ring of Fire’s Farron Cousins explains what happened to Shanahan and what that means for foreign policy.

As it stands right now in the United States, we no longer even have an acting secretary of defense and this could not come at a worse time as the United States continues to beat the drums of war against Iran. But yesterday it was announced that Patrick Shanahan, the former Boeing executive, who Donald Trump had nominated to be the new secretary of defense. He was currently the acting secretary of defense, but it was announced that Shanahan said, aw, you know what? I appreciate it. I’m going to withdraw my name. I want to go spend more time with my family. And to be honest, that’s probably the worst decision this man could make based on his history. See, the real reason Shanahan withdrew his nomination is not because he wants to go spend time with his family. It’s because court records in police records that were recently uncovered showed that he has beaten the shit out of his family in the past in 2010. Again, according to police records and court records, it was revealed that Shanahan being his wife, who is now currently as ex wife. Then, uh, just a few, actually one year after that, one year after that, this same now ex wife who was allegedly beaten by Shanahan according to the evidence, um, their son took a baseball bat and beat the hell out of the, uh, mom out of Shanahan’s wife now ex wife and Shanahan.

Defended the sun. Yeah. I know. He took a baseball bat tour. That story actually emerge yesterday, by the way, the same day Shanahan suddenly decides I need to go spend more time with my family. Yeah. Maybe you should to make sure they’re not beating people with baseball bats you a psychopath. This isn’t normal behavior, but here’s the thing. Trump understood that this was out there. At least the, uh, 2010 incident were Shanahan allegedly punched his wife in the stomach during an argument. No charges were filed in that instance. And then a year later, the sun beats the hell out of the mom with a baseball bat.

Yeah. That’s exactly the kind of psycho we want running the Department of Defense. And what gets me too is that the stories on this or that Republicans were, were shocked that suddenly, oh, we don’t have a secretary of defense. Oh my God, I don’t know what to do. I didn’t know he was withdrawing. I’ve only heard, you know, kind of rumors about all these allegations. You got people like Lindsay Graham and Jim Inhofe saying that like, ah, I’d heard rumors. You don’t have to hear rumors. You guys could actually go and look at the police records in the court records and see what this man and his son have done to that poor woman. That’s the kind of person he is, and that’s the kind of person he raised.

That’s the sickest part of it. It’s bad to be a wife beater yourself, but to pass on that trait to teach your son that, that’s okay. And then defend him when he does it with what could be a deadly weapon. That’s about the lowest of the low. But again, pretty much what we’ve come to expect from the Trump administration.