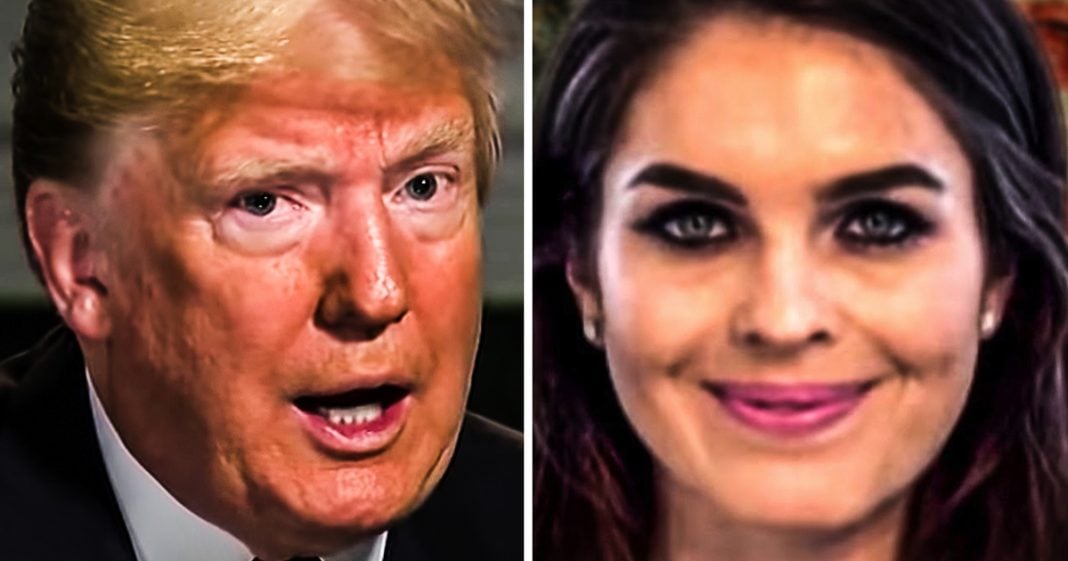 Former White House communications director Hope Hicks will be testifying behind closed doors to Congress today, and Donald Trump is already freaking out about what she might tell them. This is why the White House is trying to assert “immunity” over the testimony in order to prevent Hicks from sharing ANY information about her time at the White House. This isn’t going to work, as Ring of Fire’s Farron Cousins explains.

Right now. Hope Hicks, the former Trump campaign spokesperson and a communications director for the Trump White House, is currently testifying to Congress behind closed doors about potential obstruction of justice on behalf of Donald Trump. Now, Trump understood that Hope Hicks was going in to talk to Congress today. He understands that the public’s not going to be able to hear the testimony, but there will be a transcript of the testimony released after all the testimony is done, that transcript a is likely going to be used tomorrow, uh, as the House intelligence committee furthers their investigation. So by the end of today, possibly tomorrow, we could have the full transcript of this and Donald Trump isn’t very happy about it. So what the White House did yesterday evening was they tried to exert executive privilege over Hope Hicks testimony by saying that there was some kind of immunity that exist that would prevent her from being able to talk about her position and anything she saw while employed at the White House.

Now, they seem to have no problem with her talking about the Trump campaign. You know, all this stuff prior to the election. Hell, maybe even the transition, but once she stepped foot in the actual White House, nope, that’s off limits. She is not allowed to talk about it. Donald Trump’s swears he has some kind of immunity that protects him from that. And in fact, as we all know, uh, not that long ago, the White House actually told Hope Hicks to not comply with the subpoena, do not go and testify. She agreed to testify and then they said, okay, we’ll do not hand over any of those documents. Well then she handed over the documents, Hope Hicks. Uh, I think she understands that she could be in very serious legal trouble that could affect her employee ability for the rest of her life. So I don’t think she is the kind of person who’s willing to risk it all.

She’s already a bid farewell to Donald Trump has no more loyalty to him. She knows he’s not going to be able to help her anymore. And actually being associated with him is going to be highly toxic for her future. So I think at this point, Hope Hicks is ready to just come clean. Get this out of the way and move on with her life. But unfortunately the Trump administration may not let her because not only is she appearing in front of that closed door committee right now, but so as a lawyer from the White House who is actually representing her. So this is a lawyer that works very closely with Donald Trump and doesn’t want any negative info, you know, potentially criminal info, really getting out about things the president may or may not have done, particularly with regards to obstruction of justice. Now, as I’ve mentioned in the past, Hope Hicks is the kind person who is with Trump. Long before he even ran for president, I did everything from, you know, helping write press releases to quite literally having to steam the wrinkles out of his pants as reports of showed Hope Hicks was one of Donald Trump’s most trusted allies throughout his career and now she’s the one who could hold the key to these obstruction of justice claims.

Here’s the other thing about this, though, Trump is not going to be able to exert executive privilege over Hicks testifying about what happened while she worked in the White House, because these are items that she already told special prosecutor Robert Mueller. Unfortunately, since we don’t have the unredacted report, we’re not able to see that and therefore need Hope Hicks to come and testify before the committee. But since she has already told them to one investigator, there can be no privilege exerted over this Pacific testimony. So if it came down to it, this is not a claim that would hold up in court for this administration. They don’t have a leg to stand on. In essence, there is literally nothing they can do to prevent Hope Hicks from spilling the beans on everything she knows and everything she saw while working with Donald Trump in the White House.