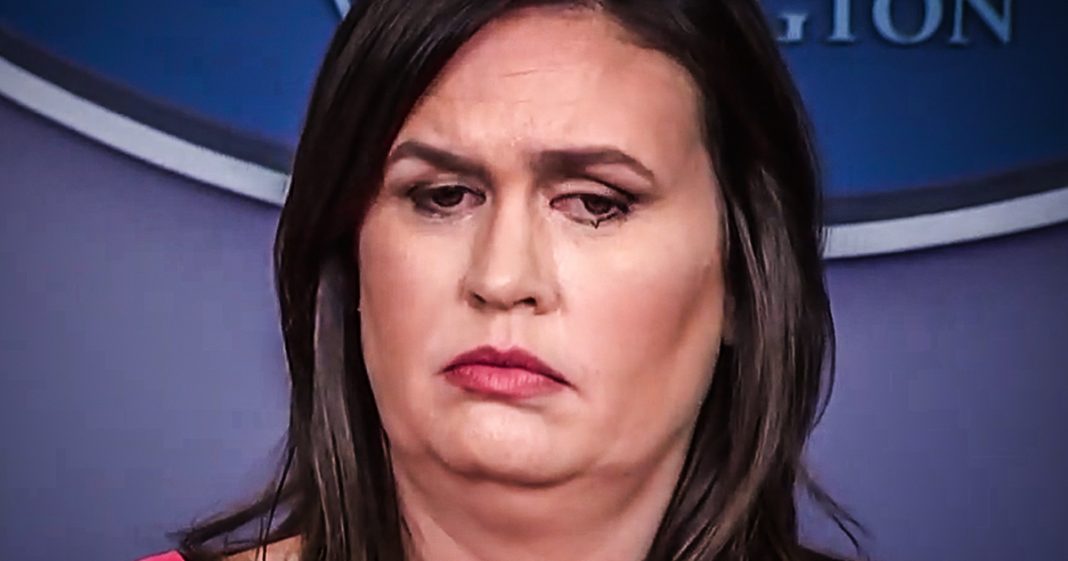 Departing White House Press Secretary Sarah Huckabee Sanders is actually considering staying in politics by running for governor of Arkansas, according to reports. As horrible as she would be as a leader, she sadly stands a very good chance of winning that race if she chooses to enter it. Outside of Arkansas she wouldn’t stand a chance, but that may be where she is able to convince enough people that she isn’t a completely horrible human being. Ring of Fire’s Farron Cousins discusses this.

Well folks, at this point, we really only have just a few more days with Sarah Huckabee Sanders serving as the White House press secretary. And I know we’re all really sad. Everybody’s gonna miss her, but fear not because according to new reports, three different aides who work very closely with Sarah Huckabee, Sanders have said that Huckabee Sanders is actually considering running for governor of the state of Arkansas in the year 2022 the next year that the governor’s seat is up for grabs. So she might go from lying for Donald Trump to actually having real power and running an entire state. Now, for most of us in this country, that seems incredibly laughable. I don’t think hardly anyone watching this video would feel confident going to a voting booth and pulling a lever for Sarah Huckabee Sanders. Unfortunately, some states in the south, including Arkansas, are not like the rest of the country. Things work a little different there.

And Sarah Huckabee Sanders, if she does decide to run for governor of Arkansas, would likely get it after all, her father was governor of Arkansas for for more than a decade. They love the Huckabee family down there in Arkansas. Nobody’s kicking them out of restaurants down there. Not to mention the fact that Boozman the a Republican senator from Arkansas, oh, he’s good friends with the Huckabee’s and Boozman is well liked in Arkansas, so they got that connection. Not to mention the fact that Donald Trump’s approval ratings are actually pretty good in Arkansas, so that’s not going to be a negative against her. Should she run for president? Uh, excuse me. Wow. Wow. What a horrible slip. I am so sorry about that. If she chooses to run for governor over there in Arkansas, and that’s what gets me about all these polls that say, oh, maybe a Democrat can take Texas.

Oh, maybe there’s cracks. Debt. No, listen folks, trust me. The south is a different breed. Texas might be slightly changing. Florida where I am is always kind of up in the air. But the area where I am in particular, which is, you know, just a stone’s throw away from Alabama, it’s not the same. And I don’t say that to be rude, but I really think most people in this country would benefit from taking a short trip down here, walking around for a day or two, then going back home so you can be like, wow, I didn’t see that coming. You know, just like I’m always really shocked when I travel and I go to, you know, in New York City or a or a Seattle, and I’m surrounded by, well, not what’s down here. It’s joyous, it’s wonderful, but there are so many different parts of this country that really are so different from one another. So when you look at these stories and you’d say, Huh, Huckabee Sanders has no chance of winning. Yeah, go spend a little bit of time in the south and trust me, you’ll be changing your story. Because in some areas down here, Huckabee Sanders would be welcomed as a royalty.