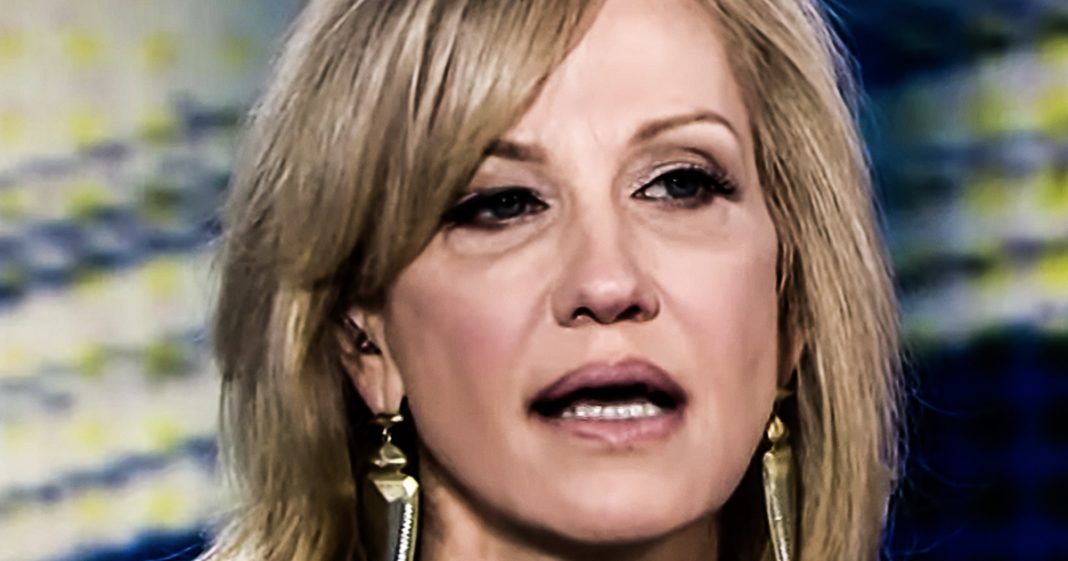 The Office Of Special Counsel inside the government has lashed out at the Trump administration for what they consider to be “undue influence” into their investigation of Kellyanne Conway’s Hatch Act violations. To put that in other terms, the OSC believes that the Trump administration attempted to obstruct the investigation. This is another serious charge against the administration, though, much like the situation with Kellyanne herself, there’s virtually no chance anything will happen to them. Ring of Fire’s Farron Cousins discusses this.

Kellyanne Conway’s Hatch Act violation scandal isn’t gonna go away anytime soon. And what we’ve learned now, according to the office of special counsel who actually recommended Kellyanne be fired for her, repeated a breaking of the law. They’re now saying that Pat Cipollini, one of Donald Trump’s White House lawyers may have actually obstructed their investigation. So not only now do we have Kellyanne Conway repeatedly violating the Hatch Act and being recommended for termination, but now we also potentially have more obstruction of justice from this administration. Now before we go any further, let’s make it absolutely crystal clear here. The office of special counsel is not a prosecutorial body. So if pet Cipollini did in fact obstruct their investigation, they’re not gonna do anything about it. You know, the house could hold a hearing, which is actually what they’re doing with Kellyanne Conway later on this month. So that’ll be fun. They’re going to talk to the office of special counsel, specifically Henry Kerner, the man who carried out the investigation, get all the nuts and bolts worked out there about how corrupt this woman is.

But for Cipollini, if he did obstruct the investigation, the house would have to do something like that and then probably nothing would even come of that. So again, wanting to get that out of the way before we go further, just so nobody thinks that, hey, we’re finally going to take them down because unfortunately that never happens with this administration. But what this story does tell us is something much more important and that is that there appears to be nobody in this entire administration capable of following the rule of law. Now for somebody like Kellyanne Conway, that’s a given. We expect her to screw up to break the law. She even taunted reporters two weeks ago, uh, when they asked her about her repeated Hatch Act violations and she said, quote, blah, blah, blah, let me know when the jail time starts. That’s how cocky and arrogant that woman has become about her.

Lawbreaking Cipollini on the other hand, is an actual lawyer who I assume has passed the bar and graduated law school. He should know that he cannot interfere with an office of special counsel investigation. But according to the OSC, he did exactly that. What he did was he sent a letter to the office of special counsel during this Kellyanne Conway Investigation and said, I want all of the evidence in all of the materials that you’ve used to conduct this investigation, which is absolutely unheard of. And Cipollini had no right whatsoever to access any of that information. The office of special counsel is a nonpartisan a, you know, basically a non-influential part of the federal government. And by non-influential I mean the White House can not interfere with anything they knew. They’re basically above the White House and the guy carrying out the investigation, Kerner, as I pointed out, he’s actually a Trump appointee and he was the one doing it. And now he’s the one concern that this administration, once again committed obstruction of justice, except that a much less impeachable way. So here is the response from the office of special counsel to Mr Cipollini, his requests, they said, quote, these requests represent a significant encroachment on OSC’s independence. This attempt by the council Cipollini Office to oversee our investigative and enforcement authority introduced as a serious perception of undue influence in an apparent effort to bias the outcome of OSC’s independent investigation.

Nobody in this administration wants to follow the law. Nobody in this administration apparently even knows what the law is and when they get told that they’ve broken it, their responses, blah, blah, blah. I don’t care. This isn’t normal and we can’t allow this to be normal. So I do actually applaud the House of Representatives for deciding to hold a hearing later this month to talk to Mr Kerner and find out exactly what he knows about Kellyanne Conway. So that may be, maybe we can get at least one law breaker out of this administration. And if it takes us having to do it one hearing, one law breaker at a time, then I would unfortunately have to say that yes, if that’s the best we can get, then it’s totally worth it.