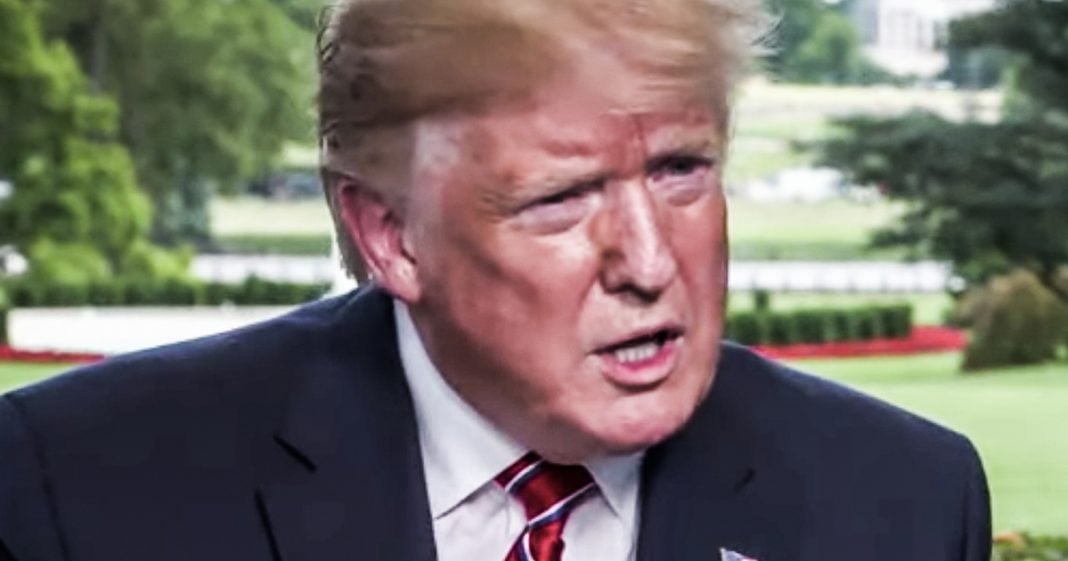 During his interview with ABC News’ George Stephanopoulos, Donald Trump claimed that his entire life has been a fight. Nothing could be further from the truth. Trump has had everything in life handed to him, and if he weren’t born into a life of privilege, he likely wouldn’t even be able to hold down a steady job. Ring of Fire’s Farron Cousins discusses this absurd statement by Trump.

Donald Trump wants everybody in this country to know that nobody ever in the history of the United States and possibly even world history has had a tougher life than him. That is pretty much what he told ABC News. George Stephanopoulos, during that interview that aired Sunday night, Donald Trump at one point said that he has been treated worse than any other president in US history. Apparently even worse than those guys that were shot in the head. No, that’s nothing compared to what Trump spend through couple of news outlets, recording unflattering information that’s so much worse than being shot in the head, but it doesn’t end there. I saw it. The only thing he told George Stephanopoulos about how difficult his life has been. He continued. He said, yeah. Uh, my life is, has always been a fight and I enjoy that. I guess. I don’t know if I enjoy it or not. I guess sometimes I have false fights, like the Russian witch hunt. That’s a false fight. That’s a made up a hoax and I had to fight that. His whole life has been a fight. Just like, I guess when he had to fight his father for that small loan of $1 million, just like he had to fight his doctor to get him a medical deferment from Vietnam for his alleged bone spurs just like he, uh, had the fight in bankruptcy court six different times for five different companies. Just like he had the fight when he lost the popular vote, yet still somehow became president of the United States.

Donald Trump is the epitome of failing upwards. This is a man who has sucked it everything his entire life. He truly and honestly has this man sucks. Yet he keeps, keeps, keeps winning somehow. Like even when he loses, he actually wins. Just like the presidential race, he lost the popular vote, but because of our archaic system, he gets to become the president. He bankrupted six businesses, including a casino where people just literally walked through the doors and start handing money out. He couldn’t even make a profit off of that. And yet somehow he became a billionaire.

He’s been lying to banks and yet somehow he’s not indicted. He obstructed justice at least 10 different times. And somehow we haven’t even begun impeachment inquiries. He truly is Teflon, Don at this point. But the reason for that is not because he’s a fighter as he says who are, because he’s had such a tough life and people feel sorry for him. It’s because people are afraid to stand up to him, honest to God, like you could if you could go back in time and just for once, maybe when this guy was a teenager, stand up to him and put him in his place back then. Maybe this would be a different country today, but he’s been a his whole life playing the victim while actually bullying others and it’s worked out pretty Dang well for him, hasn’t it? But that’s his ammo and he’s going to continue being a bully and playing the victim if nobody ever stands up to them and actually puts him in his place.

And unfortunately the Democrats in the house led by Nancy Pelosi are refusing to take that step, to stand up to this man and finally for once in his miserable, disgusting life, hold him accountable for what he’s done. And that’s the other part of the story. That’s the other thing that this man has never had to deal with. He’s never had to deal with accountability. Never. I mean, he’s even said himself that part of those bankruptcies that he had, oh, that was just for business purposes. You know, reorganizations. So we can make more money over here, over there and do whatever. I don’t pay taxes because I’m smart. He told us, you don’t pay taxes because you’re a cheat. You had all those bankruptcies because you’re a crappy businessman and you’re president of the United States because a system put in place a few hundred years ago puts you there. Not because a majority of people in this country thought you would be the best president.

Nancy Pelosi, however, is the one who’s failing us right now. She should be starting impeachment inquiries. She should be launching more investigations in the house, sending them to the proper subcommittees. But unfortunately she would rather just sit back, you know, maybe get a good clap back sometimes. Quite literally, and think that that’s good enough to defeat this charlatan. Well, it’s not. And he’s going to continue playing the victim until Nancy Pelosi either steps down and somebody replaces her who’s willing to fight him, or until Pelosi finds their spine and it’s this, and decides to fight him or herself, which is something she is capable of doing. And for the life of me, I still can’t figure out why she hasn’t.