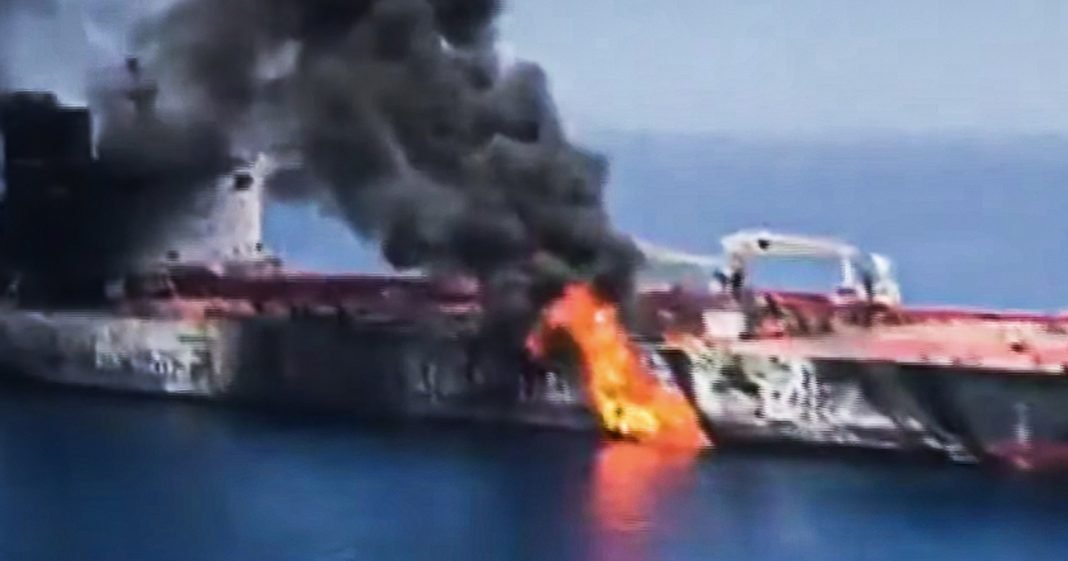 The Trump administration has wasted absolutely no time in their rush to a war with Iran, and they announced on Monday that an additional 1,000 US troops are headed to the Middle East as they build up their forces. This is technically legal, as the AUMF does give them this authority, which means that Congress needs to act as quickly as possible to repeal the AUMF to prevent another costly and unwinnable war based on lies. Ring of Fire’s Farron Cousins discusses this.

Yesterday afternoon, a acting secretary of defense, Patrick Shanahan announced that the Trump administration was sending an additional 1000 US troops over to the Middle East. You know, to just kind of prepare in case case, we need to go do something to Arad reports of later come out saying that the Trump administration is actively preparing a massive air raid campaign that could be carried out over a ran. But the bottom line is that the United States based once again on faulty and possibly even falsified information, is preparing to launch a war of aggression on a another Middle Eastern country. That is what is happening right now. It is the Iraq war redux 2.0 3.0 whatever it is at this point. We have no business being over there and doing what we’re going to do, but this administration is going to do it anyway at least until Congress revokes the AUMF, the authorization for use of military force, uh, passed shortly after nine 11, basically gives the president a green light to go over there and send troops and bomb and a whatever, any group that he believes poses any kind of Sydney. A significant threat to the United States around shouldn’t fit into that category because they don’t, but the AUMF is broad. It is very vague and the president, while that is in place, can kind of do whatever he wants with this short of declaring war. But he can escalate tensions. He can sit as many troops over there as he wants. He can start bombing, he can start shooting. We just can’t officially call it a war.

But if Congress, as they have expressed interest in doing an, in fact it’s actually kind of, the wheels are in motion a little bit. If they can repeal the AUMF, this is going to prevent the president from being able to do this and from unilaterally starting a new war in the Middle East. And you’ve got to use those quotes there because again, under the AUMF, it’s not a war. If Congress doesn’t authorize it, it’s not a war, but that is basically what it will be. But Congress can stop this and they can stop it right now. They can prevent Donald Trump from being able to launch any kind of attack over there in a ran. They just have to get off their butts and do it. And unfortunately, because of the Republicans in Congress and probably a few democratic Warhawks, that’s not going to happen. So he’s going to use the AUMF to get everything he wants to do everything he wants and then somehow declare victory, much like George W. Bush, and then use this looming threat of a deadly Irfan to help himself win reelection in 2020 that’s how this plays out.

Our allies have turned against us with, of course, the exception of the UK who says, hell yeah, bring it on. And of course, obviously Saudi Arabia who is just chomping at the bit to go over there and start lobbing some us made missiles over at Irfan. They have said that they are absolutely willing to fight, though they don’t want war in the region. They absolutely will respond to any aggressive state that they see and man, they are ready for it and they want us to go to war.

And I think knowing our history was Saudi Arabia, that’s likely all it’s going to take to push Donald Trump over the edge and start a new war in the Middle East award that he thinks is going to help him win reelection. A war that we know based on reports from oral, all of our allies, including the people who own the tanker, a war this based on lies just like Iraq. We have no business being over there, but that has never stopped a republican who is thirsty for another war.