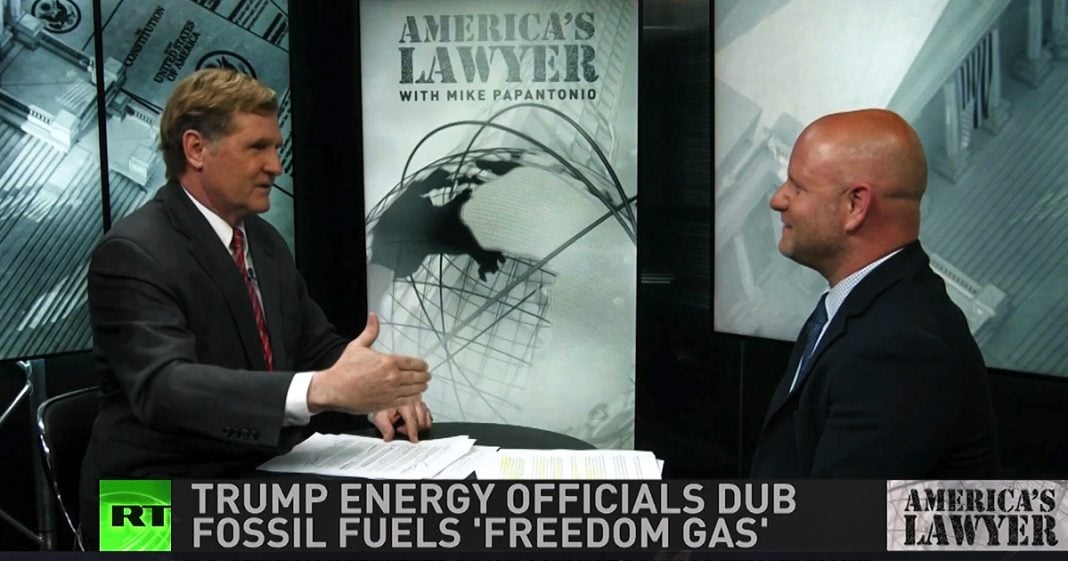 Mike Papantonio:             The US Department of Energy is trying to sell more fossil fuels across the globe and they’ve come up with a jaw dropping idea to get the American public on board. Take it from there. It’s a crazy story.

Farron Cousins:                  You know, it’s, it’s kind of what corporations do. When oh, corporates says let’s rebrand, so they’ve rebranded fossil fuels. They’re no longer, you know, natural gas. It’s freedom gas. That is actually what the Department of Energy referred to it as in a recent press release. They said, it’s this freedom gas and it’s composed of molecules of freedom that we’re going to export all over the world. We’re giving you not energy. We’re giving you freedom. Right from here in the United States, we drilled freedom out of the ground.

Mike Papantonio:             Wait, we fracked freedom out of the ground. We drilled it out, we ruined your drinking water. We ruined your entire ecosystem. Your Aquifer is toxic now, but we have created freedom gas. Who in the world looks at that? It’s like freedom fries. You remember that? Okay. Yeah. The French, God bless their soul. They had enough sense to understand that Iraq was based on a total utter lie that was driven by Dick Cheney and the all the flying monkeys around Dick Cheney.

So the French have enough courage to say, ah, we’re not getting involved in Iraq. So we come up with, well, we’re going to call French fries, freedom fries. Where does this come from? I mean, is there, are people back in a room saying, this is how stupid Americans are? What’s your take on that?

Farron Cousins:                  I, it wouldn’t surprise me and to be honest, if they are saying that they’re, they’re absolutely right. There are too many people in this country. You, you throw that word freedom in front of anything, you know, paint it red, white and blue and suddenly then heck yeah, that’s what we got to do as a country. This is our freedom gas that we’re exporting across the planet as we burn our own country to the ground, trying to frack out as much freedom gas as we possibly can.

Mike Papantonio:             As part of the problem, you know, you came up in a generation behind me but as part of the problem they don’t even teach civics in school anymore. I mean you came out political science major, graduated, you know top, you know number one in your class or something weird like that. You got all of that information. But if you think about it, if you think about it, isn’t it, isn’t it partially due to where we, you can sell freedom gas, you can sell freedom fries because back in high school and in junior high school they don’t teach civics anymore.

They don’t talk about how, how all these parts are connected, how, how, how you’re being hustled by the government. They don’t teach anymore. It’s all need to know, I need to know how to take this test so we’re going to teach you this test. What is your take on that? I mean you’re a lot fresher to that. I mean I was actually taught civics back in school. That’s how old I am.

Farron Cousins:                  Well see, the problem now is not just that they’re not teaching that that is a huge part of it, but also that there is such easy access to bad information nowadays. That didn’t even exist when I was in high school. You know, you go to Youtube, you can find, you know, hundreds of thousands of people on their giving their opinion on politics and maybe half of a half of a half of a percent are qualified to actually talk about it.

The rest of them are know nothings who you know, think they watched an article or excuse me, watched a news segment one time about a topic and they’re out there giving their opinion and people treat that as if it’s real. Or you see on Twitter, somebody in a hundred characters give their opinion and you say, oh, I guess this is correct.

Mike Papantonio:             She’s on TV, she must really know what’s going on. But I think when you drill right down to it, Farron, they don’t teach the Constitution anymore. They don’t teach civics anymore. Kids are coming out of school thinking that it’s okay for Facebook to spy on us. They think that’s okay because they don’t understand the connection. They think it’s okay for Facebook to determine what we can hear and what we can’t hear. They don’t even know what the hell the First Amendment’s about.

Mike Papantonio:             So, I mean, you know, it’s, it’s, it’s complicated. We ought to do a segment just on the failure of the educational system. It’d be interesting. Farron, thanks for joining me. Okay.