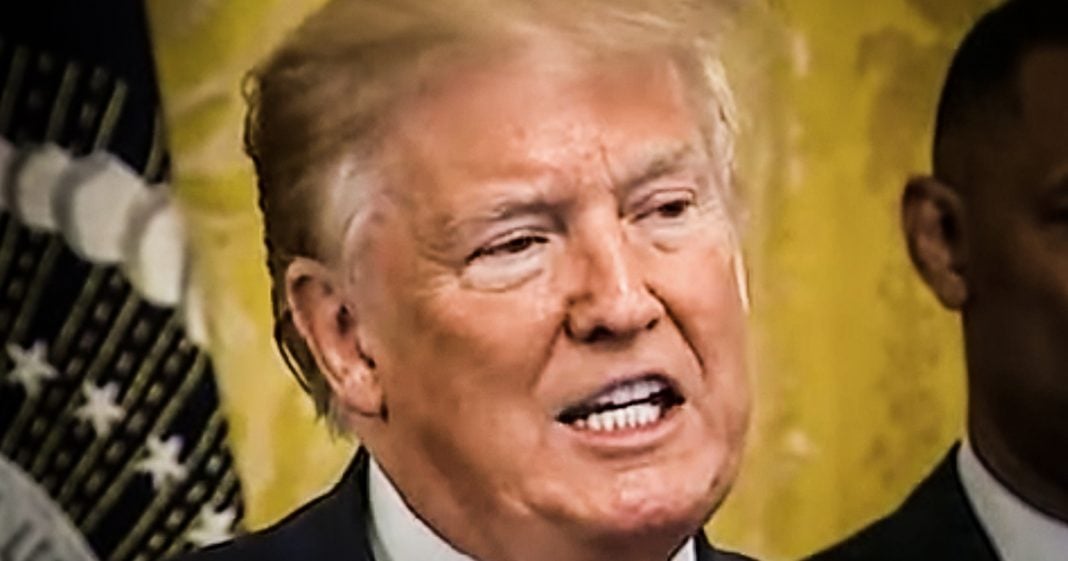 Donald Trump continues to suggest that he may stay in office for longer than 8 years, and now we need to start taking this threat very seriously. He’s said it too many times for it to be an off the cuff joke, and there’s a real chance that this man will refuse to leave office when the time comes. Ring of Fire’s Farron Cousins discusses this.

On Sunday, Donald Trump repeated what has quickly become one of his favorite lines since becoming president, and that was that maybe he’ll stick around for even longer than two terms. As president of the United States here is exactly what he had to say. This was on Twitter. He said,

“The good news is that at the end of six years after America has been made great again and I leave the beautiful White House. Do you think that people would demand that I stay longer, keep America great? Both of these horrible papers, we’ll quickly go out of business and be forever gone.”

That’s because Donald Trump was pissed off at the New York Times and Washington Post. But that’s beside the point, right? We know Donald Trump’s always mad at New York Times and Washington Post because they report things about him that are true but unflattering. So anyway, he, in that tweet there said, do you think that people would demand, I stay longer.

One month ago it was, I should be given a two bonus years added on to my presidency because you know the mauler thing, I didn’t get to do anything other than golf all the time. He wants to bonus years prior to that he joked that maybe he’ll stick around even longer than just two terms. He said it rallies, he said it a fundraiser down at Mara Lago last year that maybe he should be president for life. We should just get rid of term limits all together and he could be like the president of China who at the time had just been declared president for life. Trump likes that idea. Here’s the thing, and that wasn’t even the first time either. When you keep repeating something over and over and over again and it’s not for comedic effect, it’s not to trigger the libs. It’s because this man actually believes that.

That’s why he keeps repeating it. That’s what’s happening here. This guy wants to stay in office longer than eight years now, recently there’s been a lot of stories come out, opinion pieces and all that pieces that at the time, even up till you know, Friday I disagreed with saying like, oh, what’s going to happen if Trump refuses to leave office if he loses the 2020 election? And I thought to myself, you know what? This guy is horrible, but I don’t think we’re going to hit that 0.3 days later. I do honestly believe we’ll hit that point. I don’t think that Trump would leave office even if he’s elected or excuse me, not elected back in. I think there’s going to be some kind of power struggle there. I really do. And you see it in the way this man behaves. You see it in the words that he uses.

This is a guy that doesn’t ever want to leave the White House, at least not if he thinks he can stick around even longer. Now the flip side of that is yes, Donald Trump absolutely hates being president and I do still believe that. But to leave the White House is also to admit defeat and he doesn’t want to do that. So 2020 is going to be very interesting, but let’s hope that we get this issue resolved in 2020 so that we don’t have to deal with some kind of massive constitutional crisis in 2024 of Trump trying to go for a third term and pissing on the constitution in the process.