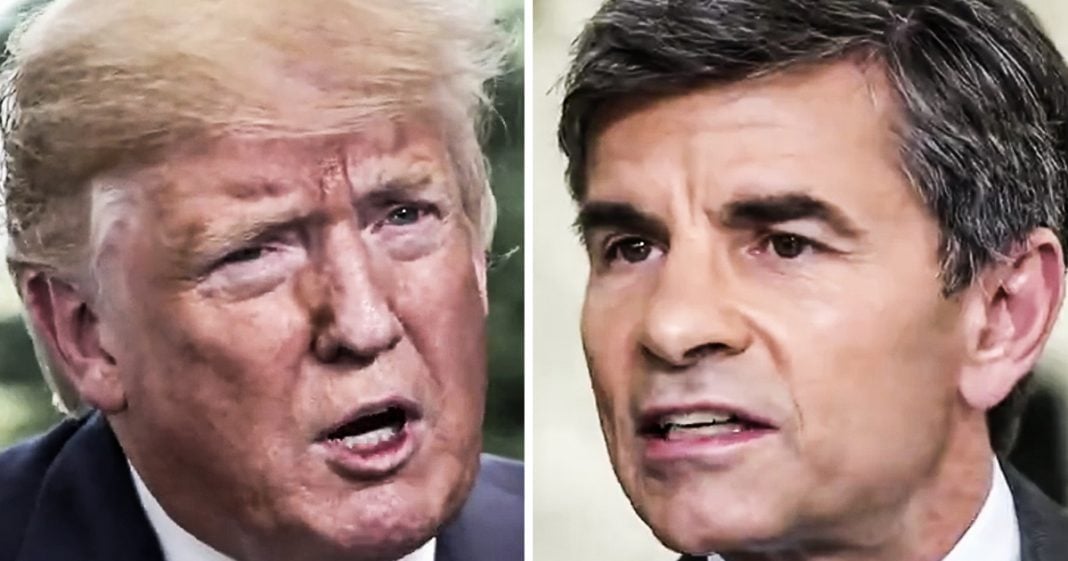 During an ABC News interview that aired Sunday, Donald Trump finally admitted why he didn’t want to go in and speak to special prosecutor Robert Mueller, and it is exactly what we expected. The President said that he refused to testify because them Mueller would have gotten him for lying. Trump is incapable of speaking without lying, and that in itself is a massive problem. Ring of Fire’s Farron Cousins discusses this.

Last night, the ABC News interview between George Stephanopoulos and Donald Trump finally aired in its entirety. We got to see more than just Donald Trump totally admitting that he would commit treason if given the opportunity. And what Trump admitted to George Stephanopoulos was that the reason he didn’t talk to Robert Mueller is because he knew that he would end up lying to him. Trump admitted then the interview with George Stephanopoulos that he didn’t go talk to Mueller because he totally would have lied to him sometimes accidentally, you know, there’s accidental lies that you tell about treason and obstruction, but he couldn’t sit there and speak honestly to Mueller . And then in that instance, obviously you would have been popped for lying to investigators and bad things would have happened. So he just decided not to do it whatsoever. Here is exactly what Donald Trump had to say. He said the reason he didn’t go speak was quote, because they were looking to get us for lies for slight statements. I looked at what happened at people. I looked at what happened at people. Okay. And it was very unfair, very, very unfair, very unfair. And yes, that was three very unfairness in a row that he actually said. So here’s the thing, he’s admitting here that, yeah, I couldn’t go talk to this guy because they were looking for any kind of lie I was going to tell and then I would be in legal trouble.

Let’s, let’s back it up a little bit though, because it is possible as a human being to talk to another human being without lying. That’s the big takeaway here. Donald Trump is so terrified of himself that he knew he couldn’t talk to Robert Mueller because he would have implicated himself in something. So then he’s popped for whatever the crime was, he implicated himself in. And then of course, you know, for lying to investigators. But that’s what’s so disgusting about Donald Trump. This man can’t stop lying. He can’t stop lying long enough to actually speak to people carrying out a criminal investigation. And part of the reason, you know, if you’ve actually read the Mueller report and you’ve gone through it and you pay attention to the language, Robert Mueller did not say that a connection did not exist. He said that they had insufficient evidence to finish establishing that connection. Donald Trump’s testimony, he could have been what was needed to help finish establishing that. They also admitted that to many members of the Trump administration, the Trump campaign, and lied to them in such a way that it actually prevented them from being able to establish that connection. And Trump knew that he was going to be one of those people that was going to lie to him, so he opted not to go speak with him.

At this point, my bigger issue is the fact that Donald Trump can’t go even a few minutes without telling a lie to somebody that that that should concern everyone, right? That shouldn’t be a left or right issue. That should be a basic human decency issue. The president is a serial pathological liar to the point where if he ever had to speak under oath, he’s admitted that he would perjure himself. Yeah, that’s a problem. And to be perfectly honest with you, that’s a problem that basically should result in Donald Trump being removed from office.