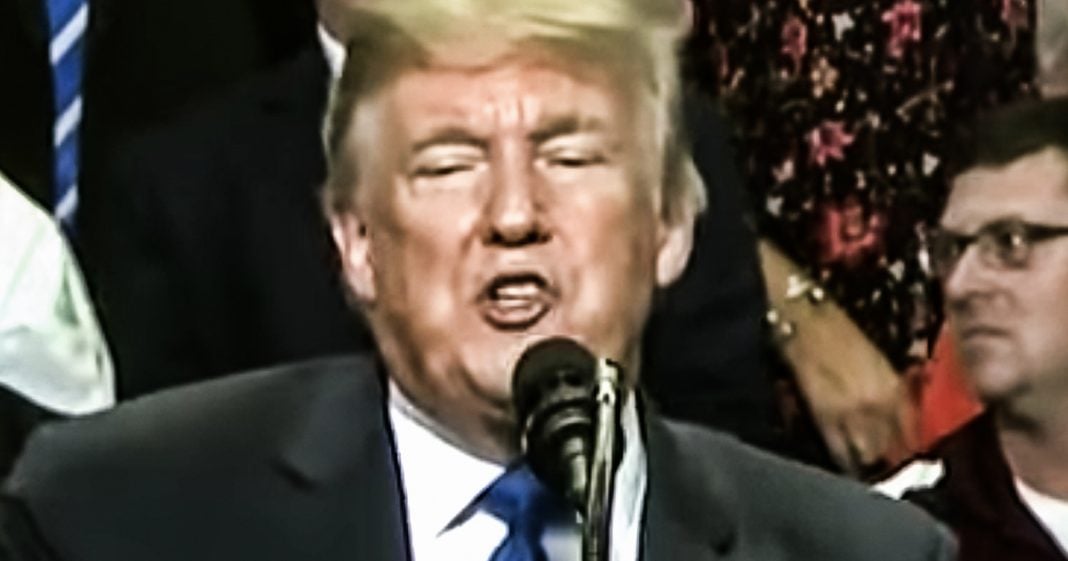 The Trump campaign has parted ways with the pollsters they had been using after these same pollsters leaked the President’s horrible internal polling numbers to the press. Trump is now raving on Twitter about how all of his polls showing him kicking butt, even though every single poll – including the ones that he has for his campaign – show that he is in serious trouble. Ring of Fire’s Farron Cousins discusses this.

Donald Trump has absolutely furious that pollsters who were working for his campaign leaked all of the data showing that Donald Trump was essentially going to get his butt kicked in the 2020 election. So he did what any super angry person would do and he lashed out at the wrong people and fired them. This weekend it’s been announced that the Trump campaign is parting ways with mostly all, not every single one of them, but almost all of the pollsters who put together those horrible poles that were leaked last week, and when I say he’s lashing out of the wrong people, sure they leaked them, but those polls didn’t tell us anything different than what other national polling is already telling us. And that is that as it stands right this second, Donald Trump has a very difficult, if not impossible, path to reelection. Yeah, they leaked it to the press, but they’re not the ones who gave the responses.

They just compiled the data and handed it to you as is their job and said, this is what you’re looking at. How would you as president, as a human being, as a politician, as a man seeking reelection, try to fix this issue, but Trump doesn’t want to fix the issue. He would rather pretend that the issue doesn’t even exist. Here’s what Donald Trump had to say. He said, we’re winning in every single state that we’ve polled. We’re winning in Texas. Very big. We’re winning in Ohio. Very big. We’re winning in Florida. Very big. Those are fake numbers, but do you know when you’re going to see that? You’re going to see that on election day because right now the polls, yes. Show him losing to people like both Biden and Bernie Sanders in Florida, Ohio, Michigan, North Carolina trumps only up by two in Texas, which is actually within the margin of error.

Yeah. Trump’s losing to some of the big heavy hitters in the Democratic Party and his own polling shows that an national independent polling also shows that, but he’s still out there saying, nope, nope. Those are fake numbers. Fake News, fake everything. We’re winning. I’m right. You’re wrong. That’s the end of the story. Now the question is, does Trump actually believe that those are fake numbers and for the sake of this country, we need to hope that he does believe those are fake numbers because if Trump thinks he is actually in trouble, if he honestly believes that he is losing in these polls and that he stands a very good chance of losing reelection, he’s going to become more desperate. And when Donald Trump gets desperate, bad things happen. We have seen the government shutdown the longest government shutdown actually in the history of this country. We’re now escalating tensions with Iran.

We’ve seen him lash out at people coming across the border. We’ve seen him get pissed off at other countries and ramp up his trade war, which only hurts US citizens. This man is volatile when he thinks he is backed into a corner. So again, let’s hope that he honestly believes that all these horrible poll numbers out there are in fact fake, because once he starts understanding that he is in trouble, that he does have a nearly impossible path to reelection as it stands right now, then yeah, horrible things will be just on the horizon at that point. So let him, for this brief period of time, live in his alternate reality. Let him think that he is doing a phenomenal job and that he is just the greatest there ever was, because nothing will be as big of a reality check for this man than watching those returns come in and November, 2020 and realizing, oh crap, those polls were actually correct.