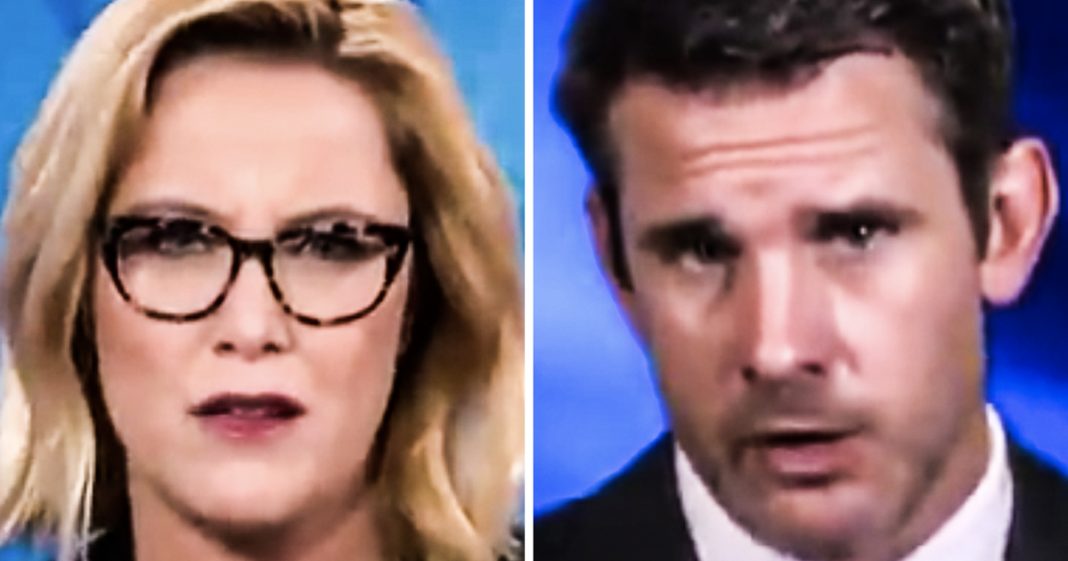 Republican Congressman Adam Kinzinger told S.E. Cupp during a recent interview that, privately, Republican lawmakers are all concerned that Trump is as corrupt as they come and that they aren’t happy with his comments about accepting foreign aid to win an election. The only problem is that NONE of them are willing to actually do anything about it, with the exception of maybe Justin Amash. These cowards need to start putting country before party, as Ring of Fire’s Farron Cousins explains.

Good News. Everybody. Republicans are finally admitting that Donald Trump might be a little bit nuts and that he was definitely in the wrong when the portion of that George Stephanopoulos interview aired last week where Trump said, oh yeah, I would definitely take aid from foreign countries if they were offering it. Republicans are now saying that was a bad thing to say. He is wrong about that and that concerns us. The problem is though, the Republicans are only saying this behind closed doors. They’re saying it privately, or at least that’s what Republican congressman Adam Kinzinger told conservative, a CNN host se cup this weekend. She Kinzinger when on SE Cupp show to talk about, oh, Republicans were were so unhappy. Trump said these things, you know, this is leaving a bad taste in our mouths. We’re only going to say that privately. In fact, here’s the exact quotes here. He said, well look, if you talk to all of them kind of privately, we all agree, here’s the problem, and then he gets caught off right there because SE Cupp a conservative again did something amazing.

And she interjected with the following. What good does privately do? I am so sick of hearing Republicans when they talk privately, say one thing, what good does that do anyone? Here’s the thing, that’s the proper response. That is exactly what my response was going to be when I saw this headline and said, you know what? I want to talk about this story because seriously, what good does it do? Republicans, you’re too cowardly to come out and say it in person. You’re too cowardly to stand up to this man who’s just a giant cyberbully. He has no real power to affect you. You know that, right? But you’re still too afraid to stand up to him and why again, because you’re afraid he’s going to tweet mean things that you hell. He’s been doing that with representative Justin Amash that nudes flourishing. He’s getting all kinds of support even from the left. People know his name now that didn’t previously know his name.

You want to boost your profile a little bit. How about you say those things privately, publicly, you know all the little things you’re saying behind closed doors. How about you? Just opened that door and let us all hear it and see if it’s true. Kinzinger continued. He said, oh, I agree. But every day there’s kind of a new outrage and about 70% of them aren’t any of Trump’s doing. I think it’s stuff taken out of context. So right there, kids in your tells us the truth. They don’t actually think that, you know, oh, a trop stop. It’s serious. So he negated his own point saying that, oh no, this was bad. And all Republicans are saying this by then saying, well she know. I mean most of the stuff’s not even Trump’s flop. So cool. It’s not that you’re cowards, it’s that your absolute idiots. Is that the case? Kinzinger because at first you made it sound like you guys were all just cowards and you wanted to say this stuff behind closed doors.

But then half a second later you go out and admit the, Oh yeah, we don’t, we don’t believe any of this stuff. No, no, no, no. You wouldn’t actually do that. He wouldn’t actually say that it’s out of context. So you’re a moron is what you’re telling us. Between the idiots and the morons and the cowards in the Republican party, there’s really not anybody left outside of those categories. Think about it. Everyone representing in our federal government today onto the conservative banner, whether it’s a Susan Collins, whether it’s an Adam Kinzinger, uh, Matt Gaetz or Rick Scott or Ted Cruz, all of them. Can pretty much easily be sorted into the categories of idiot, Moron or coward. Most of them fit into that coward category, although there’s a little bit of idiot and or more on mixed in with all of them as well. But Kinzinger just admitted to that. He said, when we’re not being cowardly, we’re being intentionally stupid about the issues.