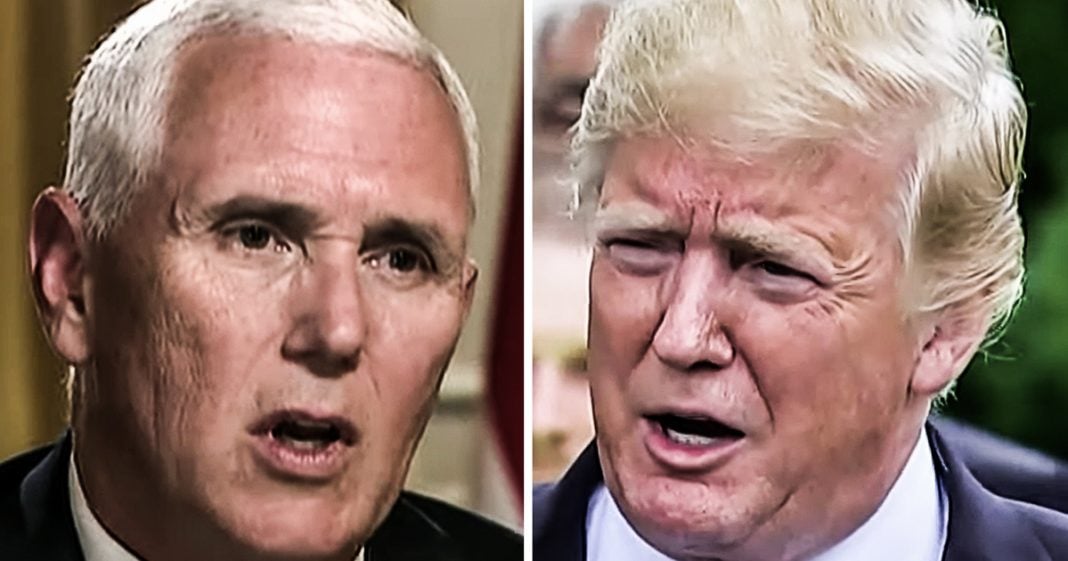 Donald Trump, Mike Pence, and GOP Chairwoman Ronna McDaniel are teaming up to help get rid of Republican Representative Justin Amash after he called for Trump’s impeachment. The Party believes that any dissention in the ranks is bad, and they will do whatever it takes to get rid of the one member of their Party who actually appears to have a brain. Ring of Fire’s Farron Cousins discusses this.

Donald Trump is still furious. That Republican Representative Justin Amash is still saying Donald Trump should be impeached. So Trump has reached out to some friends of his first and foremost, vice president, Mike Pence, also representative Mark Meadows from North Carolina, the guy who actually cofounded the house freedom caucus with Justin Amash. And of course Amash announced this past Monday that he is leaving the freedom caucus because let’s face it, the freedom caucus is basically nuts. Amash has had his eyes opened a at least a little bit at least enough to see that, wow, you guys really need to get your act together. So I’m out. And Trump has also been talking with GOP chairwoman, Ronna Romney McDaniel, and here’s the thing, they’re all talking about ways to support a primary challenger for Representative Amash head of the 2020 election. Although they’re not even certain at this point that Justin, a representative image is going to run again.

In fact, they’re actually more concerned about the fact that he may run as some kind of a spoiler against Donald Trump for president. Maybe he would primary him in the Republican primary. Maybe he’s gonna run as a libertarian. Something that Amash himself has not ruled out. In fact, he said, I have not ruled it out, but all he knows is that yeah, Donald Trump should be impeached because unlike most other folks, Justin Amash actually read the Mueller report. Now that is something I do 100% agree with representative Amash on what is laid out right there in that Mueller report, those instances of obstruction of justice, that is almost impossible to overlook, right? Democrats in the House of Representatives are likely getting their hands on some of that evidence this week. The DOJ did agree to start turning over some of it, so maybe that is one route for the future, but what I don’t agree with here is representative of Bosh using these calls from peach meant to further his own career.

And right now it does appear that that might be his only goal. After all, you know, week or so ago, what was, he went back to Michigan. He gave a a little rally and he did his, Donald Trump should be impeached speech. He got a standing ovation for it. Even from Republicans who went in there saying, I don’t support impeachment, but left there saying let’s impeach him today. That’s good. Yeah. I guess that’s kind of what you want in a politician, being able to change people’s minds after a 30 minute rally, getting standing ovations for standing up to your own party. But the question is this representative of Marsh, where were you for all these other issues that you should have been standing up to the president on? Not just on the issue of impeachment, not just waiting until the Mueller report came out. What about the terrace? What about locking children down on the border in cages?

What about his insulting nicknames that he’s using for every single person that he dislikes his on sitting members of Congress, calling them low Iq individuals is saying that the protestors in Charlottesville, some of them were very fine people were were you on those issues? You can’t just stand up to somebody when it’s politically convenient for you to do so. And that’s what’s pissing me off about this. There have been plenty of times that any republican could have stood up to. Donald Trump had said, what you’re doing here is wrong and I’m not going to support it. But instead, all too often, you know, whether it’s your Jeff flakes, are you Susan Collins, even you’re John Mccain, God rest his soul. They would talk a big game. But when they had the opportunity to actually stand up to this jackass, every one of them back down and Amash knows that impeachment can’t succeed right now.

So why not go out there and call Ford? You know, it’s not going to happen. It makes you look like a hero and you don’t ever have to face any of the actual consequences for it unless of course, Trump and pence and meadows and a McDaniel are successful in finding somebody to primary you in 2020 something that McDaniel technically by, uh, her party’s own rules is forbidden from doing. But Donald Trump doesn’t really care about rules. So he’s still allegedly talking to McDaniel about how to get you out of the House of Representatives. And I gotta be honest, man. I know any Republican that replaces you would be even worse. But if you’re not going to stand up to Donald Trump and all these other issues, and if you’re only going to say, oh, Mueller report says bad, so Trump bad. Now everything this man has done since coming in the office has been bad. Americans are suffering, migrants are suffering here on American soil. That’s all him too. So if you’re going to stand up to him, stand up to him for all the issues, not just the one that you think is going to earn you a few extra political points.