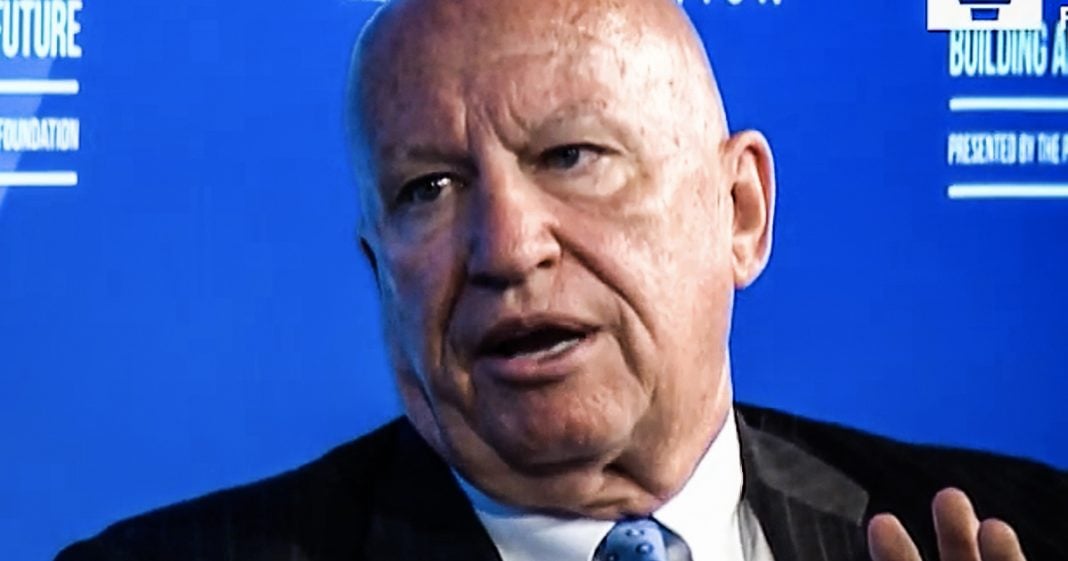 Republican Representative Kevin Brady admitted in an interview this week that the tax cut package that he co-authored probably isn’t going to pay for itself, which means that the signature talking point used to sell the bill was a complete lie, and the bill was a complete failure. But he still claims that the cuts were a “good investment,” even though average Americans are actually paying MORE in taxes. Ring of Fire’s Farron Cousins discusses this.

Republican Representative Kevin Brady from the state of Texas, who’s one of the lead architects of the 2017 Republican tax cut bill. And this week at a, a little presentation, a gathering at the Peterson Foundation, their annual summit here. Uh, Mr. Brady admitted to the crowd that, hey, these tax cuts probably aren’t going to pay for themselves. I mean, maybe we’ll know. And like eight, nine, or even 10 years down the road if they’ve provided any benefit to the economy. So, you know, I know we said this was gonna pay for itself, but yeah, it’s not looking like it’s going to do that. So in essence, representative Brady here just admitted that his Republican tax bill that he authored was a complete failure.

It was supposed to pay for itself and Oh, it’s not gonna do that. Now here’s the thing. Every single economist and every single person who remembers anything from American history knew that these weren’t going to pay themselves. They weren’t gonna help the middle class in any way. It was just going to give a bunch of money to already rich people and they were just going to sit on it and do absolutely nothing. And that is what’s actually happened. What we didn’t expect to happen was it taxes on the middle class. We’re actually gonna go up, but they did. So we’re getting more screwed than ever. Wealthy people actually have so much money now that according to recent reports, they don’t even know what to do with it cause they’re just swimming in cash. And Kevin Brady finally has the guts to come out and say it didn’t do what we said it would. Who?

And here’s the kicker though. He also said shortly after that I either, it was a good investment though. I think it was good for a, maybe not good for the economy, but yeah, it was a good thing. Cause that’s the thing with Republicans. They understood, they knew, they knew just like you and I know. That the middle-class is never going to get helped from a tax cut for the 1% every single time it’s been tried. It’s been an absolute failure. Stockman, the guy who actually invented trickle down economics came out a few years ago and said, yeah, the whole thing doesn’t work. It’s impossible. It cannot work in practice. It doesn’t. And yet Republicans knowing this information, knowing it doesn’t work, they’re going to continue to do this because it benefits them personally. And the people who fund their campaigns, so they’re not going to stop. No matter how much evidence is out there telling us it’s bad telling us it doesn’t help anybody but the elite Republicans, we’ll still do it and they’ll still come out and lie to us. And now, even though he’s admitting that it’s not going to pay for itself, you know what is going to have to pay for that cuts to social safety net programs.

You didn’t have cuts to social security cuts. The Medicaid cuts, the Medicare cuts that we already know are coming, but they could get deeper in the near future. As these tax cuts continue to send us in this downward debt spiral. You know, uh, our deaths up deficits up 40% this year, 80% since Donald Trump took office 80% since Trump took office because of this one point $9 trillion tax cut, we had to give wealthy people. The CBO says that the spending is up, but revenues into the government or down. In fact, most of the revenue that the federal government’s pulled in over the last 12 months, do you know where it came from? Tariffs. You know who’s paying those tariffs on us? So not only did our taxes go up, we’re the ones paying the bill for the tariffs. That cost of goods and services go up. So we’re paying even more. We’re all paying more. Why? Because Jack asses like Kevin Brady wanted to give wealthy people a tax break.