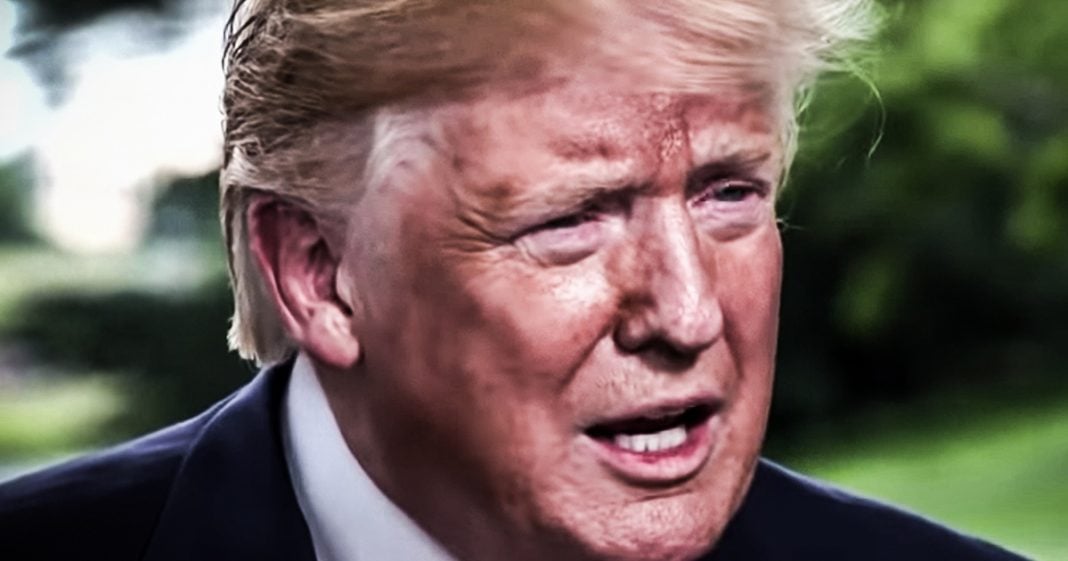 Donald Trump isn’t having any fun being President, and he makes sure that everyone knows it. But quitting would mean admitting that he can’t handle it, so is there a chance that Donald Trump secretly wants to be impeached? If you think about it, that gives him everything that he ever wanted. Ring of Fire’s Farron Cousins explains why the President may secretly want to be removed from office, and also why this theory could be completely crazy.

Earlier this week, I read a really interesting articles, salon.com from Amanda Marcotti talking about the fact that Donald Trump is an absolute drama addict. And the reason she talked about Donald Trump being a drama addict is because it seems like Donald Trump actually wants to be impeached, that he craves the drama that comes along with it. She pointed out the fact that Donald Trump brings up impeachment on Twitter, unprovoked. He brings it up when talking to reporters unprovoked. And while there are reports that Trump won’t even say the word impeachment behind closed doors with his age, he still talks about it quite frequently. Any kind of loves to talk about it because it’s drama.

Marcotti says that Donald Trump has a drama addict after all. The guy was a reality TV star. Uh, she had a great phrase here. Uh, he got that job, reality TV star in the first place because TV producers seek out human hurricanes within adequate emotional regulation for those shows. And yes, that perfectly describes Donald Trump. So she, she talks about the fact that Donald Trump likely craves impeachment. Not necessarily because he wants to be removed from office or probably not even because he thinks that’ll help him in the campaign, but because he loves the drama of it, oh, is something bad going to happen to me? Am I going to win this? Am I going to lose this? I get to attack the Democrats. This is great and that is something Donald Trump does crave. And I do believe her. I agree with her on this point, but I do also think that it goes a little bit further than that.

It would not surprise me to find out that Donald Trump’s secretly wants to be impeached because he wants to be removed from office. And here’s why I feel that way. Trump hates being president. Look, that’s obvious. He likes the, the accolades. He likes being able to meet the queen and do all kinds of fun stuff. But he also likes to sit on his ass and watch TV and get on Twitter like any, you know, senior citizen who is retired and play golf and all that kind of crap. He doesn’t want to actually do the work of being president. He’s made that abundantly clear. So how without admitting that the job is too much for you in quitting or losing an election, cause then you’re the loser. How do you get out of this and still look like the hero for the Republicans? You make yourself a martyr

by going through impeachment and being removed from office because then Trump gets to do one of his favorite things, which is play the victim and he will get to do that for the rest of his life if he gets impeached and removed from office. So he satisfied there. He gets to attack Democrats, he’ll get to go on Fox News. Republicans will have him for speaking engagements. He’ll write a book or actually somebody else to write book and stick his name on it and he’ll make millions off that. He gets to be the martyr for the Republican Party in Fox News. Will praise him every day is a hero who was unjustly crucified by the Democratic Party, and he also doesn’t have to do any of that presidential stuff anymore that he seems to hate anyway. So yes, it wouldn’t surprise me if Donald Trump actually wants to be impeached. And I do also agree with Marcotti that, yeah, Trump loves the drama.

He loves to have something to bitch about, something to attack Democrats for, and impeachment is giving that to him right now, but the Democrats still need to move forward with it. Even if it is what Trump wants in this particular instance, you need to give him what he wants because it’s not going to end the way that he thinks it is. You know, that whole scenario I just described about him being the martyr. Yeah, that’s not what’s actually going to happen, but that’s what he may think could happen if he got impeached and removed. That’s the end. You know, Richard Nixon didn’t go down to some kind of martyr for the Republican Party. No, he’s a blight on American history. Trump would be the same. Not to mention the fact, and Marcotti brilliantly points this out to many people in this country have not read them all a report.

They’re not going to read the Mueller report. They don’t know how bad it actually is. But what they would know is that during an impeachment hearing, all kinds of dirty little secrets, which they’re not even secrets because they’re in the Mueller report that people won’t read, those are going to come out. Democrats could force those issues on to people even if they didn’t want to know it. And suddenly Trump’s approval rating tanks from the low forties to the low thirties and that’s gonna spell doom for his reelection. And that is the best case scenario right now that we would get from impeachment. And that is why, even if the man is craving it, Democrats in this one instance need to feed Donald Trump’s cravings.