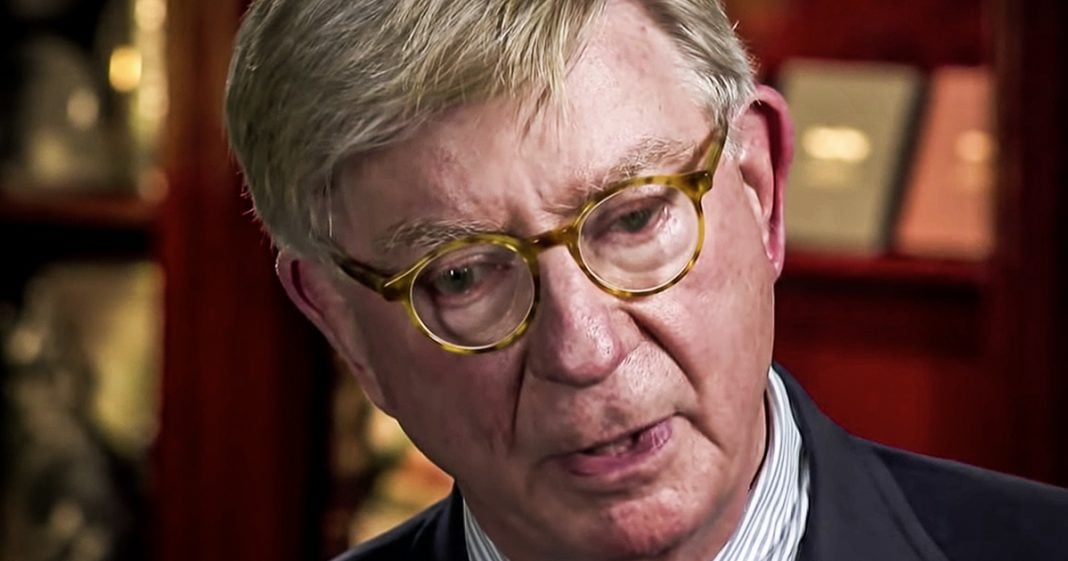 Conservative columnist George Will doesn’t believe that his party is going to survive much longer because they keep driving away young people. He says that part of this is because the youth are embracing a bad policy (socialism) but the larger reason is because the GOP has absolutely nothing to offer young voters and they are actively driving them away from the Party. Ring of Fire’s Farron Cousins discusses this.

Some conservatives, the ones who are not bowing down at the altar of Donald Trump, are willing to admit that their party is in deep trouble and not just because they’ve essentially become a cult of Trump, but because they’re doing absolutely nothing to convince the young generation of American voters that the Republican Party is the party for them. Recently, conservative columnists, George will, who has been outspoken in his dislike of Donald Trump, went on CNBC to talk about the fact that basically the Republican party is digging his own grave right now because young people are leaving the party in droves. Here’s the exact quote of what he had to say. Some of it I agree with a lot of it’s total bs, and I’ll get to that in a moment, but here it is. Young people have made up their mind about the Republican party, that it’s kind of the dumb party. 100% agree with you there.

These are the same young people who say they have warm feelings about socialism, but all they mean by that is that socialism means everyone being sociable and being nice to one another. Uh, they haven’t thought it through. You’re totally wrong about that, by the way. George will, and that is one of the reasons people view your party is the dumb party. He continues the same people who are suspicious, who likes socialism, are suspicious of government. So I think that they’re uninformed at this point, but the Republican party is doing, he gets very best to drive them away permanently. Now that I agree with you with a, I don’t agree with you that a, they’re uninformed about socialism. They understand it because we’re not talking about the government coming in and running every industry in the United States. We were talking about socialistic programs, you know, like Medicare, expanding that into medicare for all social security, actually expanding that for social security recipients, debt free college, a $15 minimum wage, the green new deal, those kinds of socialistic programs.

Yeah, they understand what it means. They understand why they support it and they understand why it’s needed. So they’re not uninformed. And yes, you are the dumb party. And yes, they do think this because you patronize him with this kind of language. George will goes out. They’re trying to say that, oh, you idiot Republicans are digging your own grave because you’re not reaching out to these fucking moron kids, right? Kids, you just call them idiots. You dumb ass. You think they’re going to come flocking to you. Now this is why your party is dying. This is why you’re losing the youth. Not to mention the fact that the only young representatives of the Republican party out there, who do you got? You got told me, Lerone you got Candice Owens, you got Charlie Kirk and Ben Shapiro. That’s the best you have to offer to go out there and public and say, look, kids were young.

We’re hip. We’re Republicans. Come vote for us. Corporations are awesome and racism doesn’t exist. That’s the worst selling point I’ve ever heard in my life. Literally for anything, because these young voters, no better. They’re not all funded by massive corporations and the Koch brothers and right wing think tanks that funnel money back and forth to these little conservative idiots who get paid big bucks for their stupid organizations. A turning point. USA. Ben Shapiro’s getting Fox News money. Tomi Lahren is too. They get money from other corporations. There are corporate funded mouthpieces whose sole purpose is to go out there and convince people that reality is not what they think. Young people are a hell of a lot smarter than people. Give them credit for. Certainly a lot smarter than George will gives them credit for. Even with his little backhanded, oh, they’re leaving us because they think we’re dumb, but there’d also dumb.

But we’re not helping your dumb, George. You are a not an intelligent individual. The Republican Party as a whole is not an intelligent organization. That’s not to say that there’s not some intelligent republicans out there. There absolutely are. But as a whole, when you put them all together in a room, not subright, not so smart, and certainly not working on any kind of sustainable policy that’s going to attract new energetic voters. So George, you’re right to go ahead and dig the grave for the Republican Party, but while you’re at it, you may want to go ahead and jump in there yourself, cause you clearly don’t understand why young voters hate the Republican Party today.