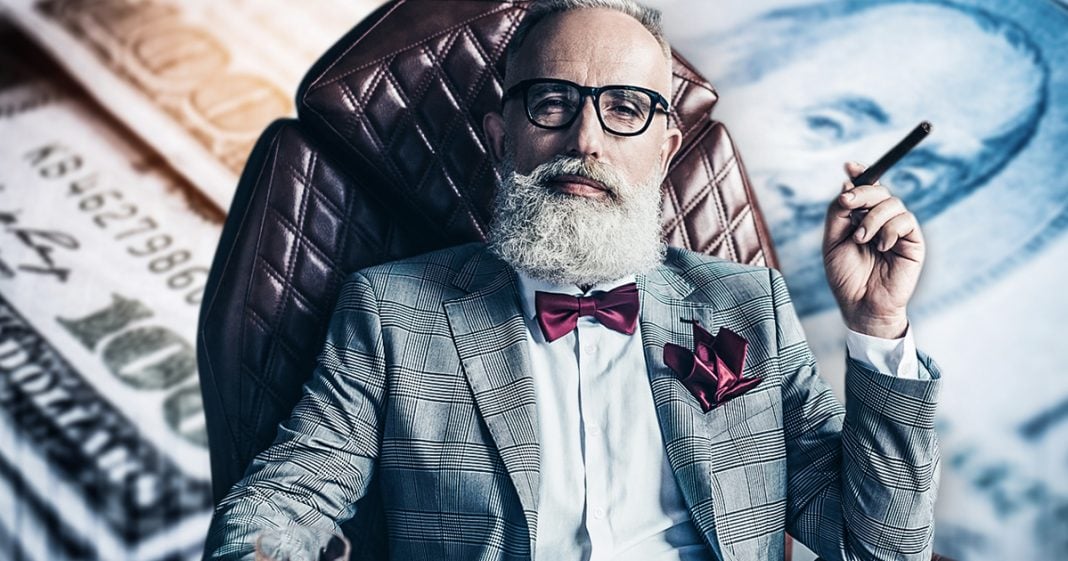 According to an infuriating new report by Axios, corporations and the wealthy elite have so much money now that they don’t even know what to do with it. They are running out of stocks to buy back and they don’t have many other investment options, so they end up simply hanging onto their cash. Weren’t they supposed to spend it on workers? Wasn’t that the deal that Republicans told us was definitely going to happen? Ring of Fire’s Farron Cousins discusses this.

You know, we’ve done a lot of stories recently talking about how the average American can afford a $400 emergency. You’ve got tens of millions of people who have quote good health insurance that’s still can’t even afford prescription medicine or doctors visits. But here’s one thing we haven’t talked about, and this is actually becoming a very big problem in this country according to Axios. And that is, that’s the top 1% have so damn much money. They don’t know what to spend it on.

A new report by Axios shows that the top 1% and major corporations here in this country are now in possession of so much money that they literally don’t know what to do with it. They’re actually struggling to come up with ways to spend all of this crazy money that they have. Let me run through some statistics here. US companies raked in a record, two point $3 trillion in corporate profits just last year. Um, companies could obviously pay their workers more, but according to a economist, a chief economist at capital economy economics says that would be terrible for the stock market. So, yeah, we could, we could give our workers raises. That would be one thing to do with this money, which, uh, actually amounts to 303 point $9 billion worth of cash. We couldn’t do that, but that’s pretty bad for the stock market. So instead, what what corporations are doing here is they’re just buying back their own stock.

Which they’re actually kind of running out of that. Your stock buybacks hit a record high in 2018 they’re going to be even higher in 2019, uh, as predicted at the current path. But then eventually they’re going to run out of stocks to buy back. So they don’t know what they’re gonna do. They don’t have anywhere else they want to invest it. They’re just sitting again on 303 point $9 billion in cash because they don’t know what to do with it. And meanwhile, real wages for those of us here in the United States are stagnant. The only time the wages actually look like they’re going up is when you add in the pay of CEOs and shareholders and people like that. Then yes, because their pay has gone up so much. It actually on an average makes it look like our pay has gone up a little like 2.5 and 2.9% but actually workers aren’t getting those. We’re not getting those raises were not getting the benefits. We’re getting our benefits slash left and right and companies across this country, they’re moving more to temporary workers like Google who now has more temp workers than permanent workers and those are workers. They don’t have to pay over time. They don’t have to give them benefits or health insurance or any of those things that actually keep workers happy and healthy.

That’s the problem here folks. We have incentivized corporations to screw over their workers and of Republican policies in Washington DC. We also tell them, hey, we’re not going to punish you for screwing over your workers. We’re not going to, you know, find you or put you in jail when you poison entire communities are when your factory burns down and you lose 800 workers in the fire. Don’t worry about any of that. When your mind explodes instead of what we’re going to do for you is we’re going to cut taxes, we’re going to raise taxes on the middle class because that’s what’s happened with the 2017 tax cut and jobs package. The Trump tax cut, we’re going to screw over the, uh, middle class and working class even more. Sure that we can give you wealthy, elite, and major corporations more money. And you can do whatever the hell you want with it.

But now they’ve kind of hit that scenario of what happens when you get everything you ever wanted. Now they don’t know what to do with it. So my suggestion is this, don’t do anything with it because I know you’re not going to give people raises. You’re not going to increase benefits. You’re not going to give out bonuses. You’re not going to go out there and pay off everybody. Student loan debt. So do me a favor, just sit on it for now. So that way we can get a Democrat in office after the 2020 presidential election and hopefully it’s going to be one of the candidates who has suggested taxing you to hell and back, because I would love nothing more for that big ass pile of cash that you’re sitting on to go back to the federal government to pay for programs like Medicare for all debt free, college, universal, Pre k and childcare, all of it. Because that is where that money needs to go. But we know for certain that these wealthy elite, the members of the top 1%, they’re not about the fun that stuff on their own. So it’s time for the government to step in, take that money back because it’s so much they don’t even know what to do with it and actually use it to help people here in this country.