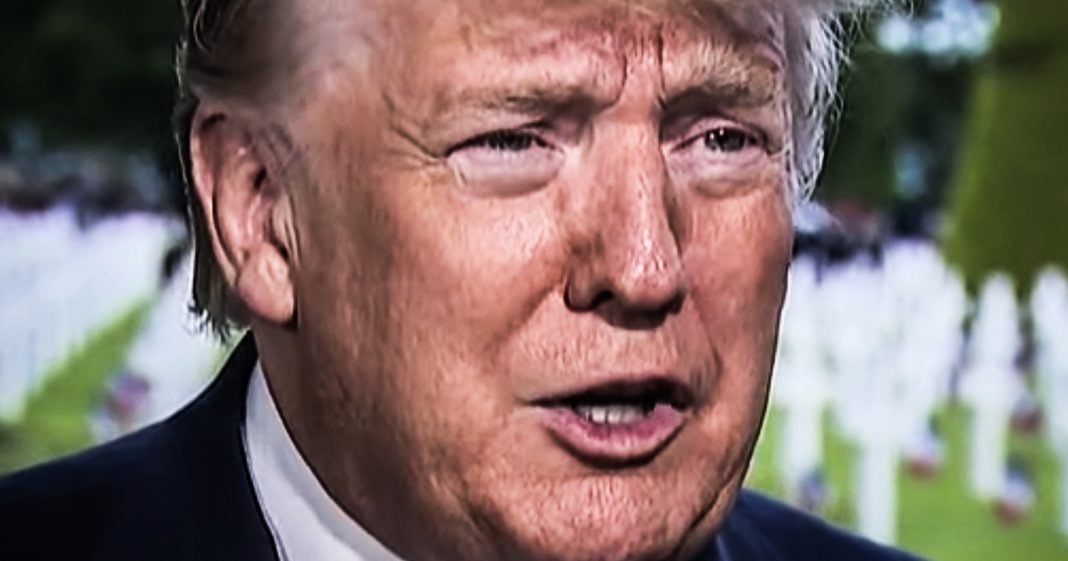 Donald Trump’s massive Emoluments Clause violations seem to be just racking up, and a new report says that his companies (which he gets the profits from) have taken in cash from at least 22 different countries since Donald Trump became president. He’s made comments in the past about favoring countries that buy things from him, and now every country on the planet understands how to manipulate him. Ring of Fire’s Farron Cousins discusses this.

You know, a guy like Donald Trump is actually pretty easy to figure out. You know, it’s easy to know what this man stands for, what he’s all about, what he wants to do, and how he’s going to get there. And the easiest way to do that is simply follow the money. You know that old adage from journalism back when we had a plenty of real journalists in this country, we’re down to just a couple at this point, but you follow the money and that’s what some of these amazing organizations in this country, you’re doing specifically citizens for responsibility and ethics in Washington crew. They have done a phenomenal job of leading the charge in the lawsuits against Donald Trump for violating the emoluments clause of the constitution. Public citizen and Pro Publica have also been talking about the fact that Donald Trump is taking in illegal payments from foreign governments, from foreign officials representing those governments.

They’re staying at his hotels, they’re playing on his golf courses, they’re eating at his restaurants. That money by way of the profit stream goes back into Donald Trump’s pocket. It is therefore it illegal and monument according to the U s constitution. Now, Donald Trump is the only president in modern history who has been allowed to maintain control of their businesses while serving as president of the United States. And as I am very fond of saying they made Jimmy Carter sell his peanut farm. The man couldn’t profit off of peanuts, yet Donald Trump can profit off of all these foreign dignitary staying in his hotels. And if you don’t think it’s a big deal, then how about this new report that shows that 22 different countries have essentially funneled money to Donald Trump by way of using his properties?

And all the money goes back into Donald Trump’s pocket. And sure. I’m sure there is an argument to be made that they’re just staying in a hotel there. They’re not getting anything from this. They’re not trying to bribe the president. No. You haven’t been to Washington DC? I’ve met a couple of times. Let me tell you one thing. There’s no shortage of in Washington DC hotels. You ever been to New York where a lot of Trump properties are? You know what else? There’s no shortage of over their hotels and properties. Oh, you’ve been to Florida before. Yeah. You know, we have an over abundance of golf courses and restaurants, so you don’t have to go to Donald Trump’s, but you do when you’re trying to curry favor with them. Because we know as Donald Trump himself has mentioned, he likes Saudi Arabia because they buy a lot of things from him.

So he likes to give them preferential treatment and now we find out that they’re among, uh, you know, these 22 countries that are always staying at his properties, you know, funneling money indirectly back into his pocket. And Saudi Arabia hasn’t gotten any special favors. Right. Other than, of course, you know, the $8 billion arms sale that he decided to go around Congress in order to do. Yeah. Saudi Arabia is making out like a bandit here and they know exactly what they’re doing. In fact, every country on this planet knows how to manipulate Donald Trump. You want to get a special favor from the United States. All you gotta do is suck it up for a night and eat at one of the disgusting restaurants on his properties that have, by the way, had been slapped with multiple health code violations over the years. Or if you can stomach it after that, spend a night or two in one of his hotels that’s Gaudy and tacky and atrocious. If you can stomach that than you two could get special treatment from Donald Trump.