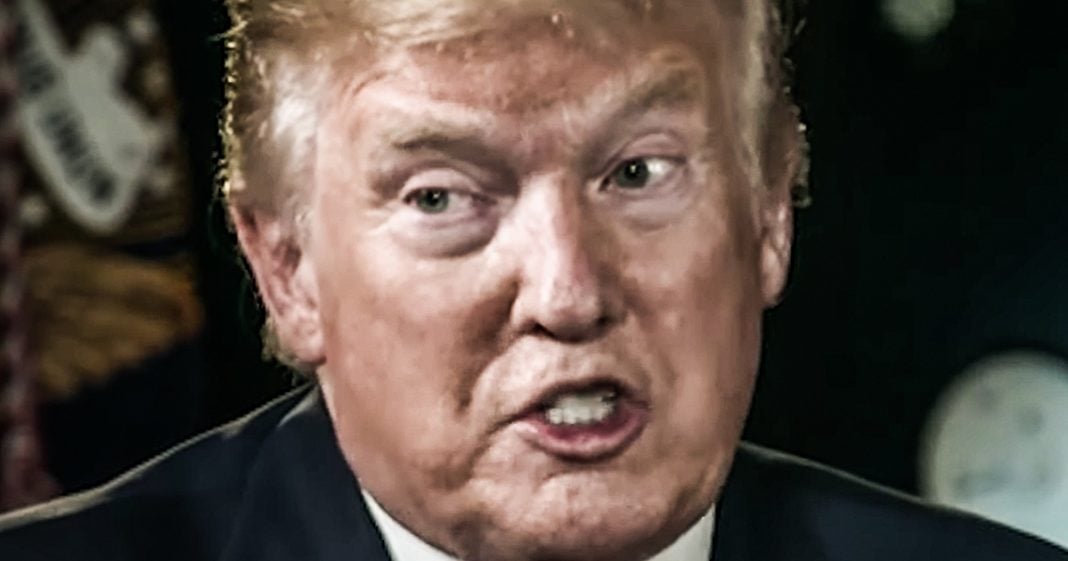 Republicans in Congress, and even in the electorate, are letting Trump get away with things that they have traditionally been against, as well as things that Democrats would have been strung up for even suggesting. They seem to be perfectly fine with what Trump does only because he is on their side. When Trump does it, it’s ok. Ring of Fire’s Farron Cousins discusses this.

You know, there’s been a bit of an interesting dynamic, I guess that’s developed within the Republican Party today, and it’s all thanks to Donald Trump and the fact that as a species, Republican’s apparently don’t seem to have a spine, which is very interesting for vertebrates, would technically make them not vertebrates. But nonetheless, what we have seen happen since the day that Donald Trump became president is that you suddenly have all these Republicans in Washington DC who were against this or against that are attacked Obama for allegedly doing this. Suddenly those same behaviors are totally okay when Trump does it. In fact, as a recent, uh, vanity fair, or excuse me, New Yorker article pointed out, the party is basically become the, except when Trump does it party here. Here’s what they pointed out here. You know, Republicans were totally against tariffs of any kind until Trump came along and now suddenly they were, terrorists are pretty good.

It’s helping us out. Yeah, yeah. Oh yeah. People are losing their jobs, losing their businesses for the terrorists, but Trump’s doing it so we support it. They’re also presumably against stonewalling. Investigators refusing to comply with congressional subpoenas, shutting down the government, running up the national debt, labeling close American allies, national security threats, and praising dictators. Except of course when Trump does it, because remember when Barack Obama took all that heat during his administration for allegedly cozying up to a ran, Iran’s our enemy. They told us they hate us, they want to kill us. And then you have Donald Trump who is literally sitting down laughing, having a big old time with people like Kim Jong on and Vladimir Putin, right? You know, praising people who are known to murder their own citizens because they disagree with their politics, telling us that those are great smart men, strong leaders, good guys.

It’s not just those two. There’s been plenty of others in the last two and a half years, but Republicans are cool with that. Just, you know, not if anyone else on the planet did it, but when Trump does it, it’s okay. Hillary Clinton sat down for 11 hours, 11 straight hours of testimony, endured years of investigations into both Bengazi and her alleged email scandal and Republicans to this day, keep chanting, lock her up. We know she’s hiding something, even though we have all the information there is. Even though investigation after investigation has found literally no wrongdoing on her part, we still want to lock her up. Meanwhile, you have a Mueller report that has 10 instances at least of impeachable offenses against president Trump, and they say it. Ah, that’s not true. We don’t believe that guy. We believe the Trump man, that orange guy in the White House, he is. He’s the one who’s being honest, not these lifetime Republicans who came up with this report. Because when Trump does it, it’s okay. That seems to be the mantra of the Republican Party today. They don’t have enough of a spine to stand up to them. They’re not willing to tell him that he’s wrong. They’re not willing to go out there and say, hey, um, we need to do something about this. And that’s why when you do have people like Justin Amash who come out and say, yeah, I think Trump should be impeached. That’s why it makes headlines because it’s just one person.

I really, today is there only one person left in the Republican Party with a spine and I don’t even know that. I’m willing to say a mosh actually has one because it’s obvious that he’s in this for his own, possibly a political future, maybe wanting to run as a libertarian for president in 2020. That’s the best you got. I know Jeff Flake was a horrible person. His voting record sucked. Susan Collins the same thing, but uh, you know, they still got praise occasionally for pretending to be against. The president, still voted with them, still voted to put all this crappy judges in place. But Hey, at least they occasionally acted like they were disgusted by the man, but they weren’t. And here’s why. As we’ve said a million times, there is no difference between the policies being pushed by Donald Trump and any other republican serving in public office today. They all believe the same things. They would all be doing the exact same things. It’s just that a few of them have an issue with the way Trump presents it, but that’s why they’re so spineless. They’re afraid of him. They were afraid of him going after them on Twitter, but more importantly, they also all happen to secretly agree with everything that this man does, because when Trump does, it is absolutely okay with Republicans.