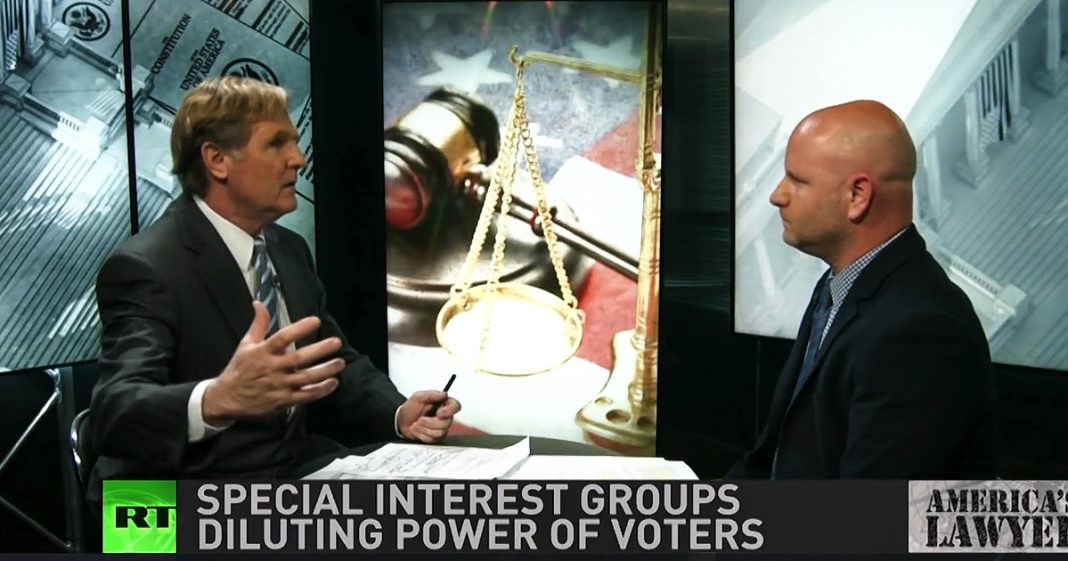 Via America’s Lawyer: Corporations understand that not every legal battle is gonna make it to the Supreme Court. In fact, most cases won’t even make it to federal court at all. That’s why corporate dark money is starting to flood local judicial races. Mike Papantonio and Trial Magazine’s Editor Farron Cousins discuss.

Mike Papantonio:             Corporations understand that not every legal battle is gonna make it to the Supreme Court. In fact, most cases won’t even make it to federal court at all. That’s why corporate dark money is starting to flood local judicial races. I have a Farron Cousins with me with the Trial Lawyer Magazine to talk about this. This is a story you’ve been covering a long time.

If I think back, how long we have been trying to warn everybody all that’s happening, all what happens with voters is it’s the shiny things. The president’s race, this Senate race, the, you know, maybe the, I don’t know, they, they pay more attention to local town, county commissioners than they pay where it comes to local state court judges. And we’re getting killed as consumers in state courts aren’t we?

Farron Cousins:                  Absolutely and that’s what, you know, voters don’t seem to understand. Most judicial races in this country are, are considered nonpartisan, which means when you go vote for the judge, there’s not going to be an R or a D next to the person’s name. It’s just the judge’s name you vote for. Maybe you’ve seen some commercials, but what people don’t understand is that there is a lot of money.

You know, it might be a town of 2000 people, but that judge has probably taken in tens of thousands or even hundreds of thousands of dollars from massive corporate interests. And, you know, you pointed out, I’ve been talking about this for a long time. It’s every two years I have to do another story on this to talk about all the money flowing into these judicial elections.

Mike Papantonio:             Let me put it into perspective, okay, let’s just take for example, let’s take Wisconsin. What a nightmare, I mean it’s a nightmare up there. So you have, you have, you have governor Scott, Scott Walker, you know, dope of all dopes. He is able now to put in place the judges, the state court judges that helped him get elected. That’s what’s happening. For example, he has one judge that actually raised all the money for him to be elected as governor in the elect, in the campaign.

Now here’s what’s really interesting. So, so Walker, then appoints the judge and now this particular judge is hearing all of these cases that are being generated by the very people who gave him money, the big corporations, the special interests. Rather than saying, you know, I can’t get involved. I raised money with these people. No, these judges are jumping right into it and that’s what everybody’s missing.

What, you know, even this article, this article talked about, it talked about kind of the warm and fuzzy social issues, LGBT and you know the bathroom bills. I don’t know why writers talking about this topic always fall on those issues. LGBT, bathroom issues, gender issues, when the, when you rather than talking about dinner table issues that affect consumers. That’s where these judges are killing us.

Farron Cousins:                  Absolutely, and what we’ve seen, the reason they target these, you know, smaller cities, states, whatever it is, the local courthouse judge, the reason they go after these people’s is because those are the people who make the decisions that are directly going to affect a corporation in that area. Say you have a town like Denton, Texas that you remember a few years ago they passed the resolution to ban fracking. Well, suddenly after they did that, you had all of this fossil fuel money coming into this tiny little Texas town to elect county commissioners into the judicial races because they wanted to overturn this.

The Koch brothers specifically target school boards in places like Ohio and the Dakotas, and they do it because all politics is local. And if they can get, you know, a county commissioner to go along with their plans for a new fracking well or a local judge to rule that, yes you can frack here, that’s all they need. You can spend $10,000 on that small campaign versus 10 million on a federal campaign.

Mike Papantonio:             So let me go back to this, this note of, that we talk about all the time. People have to understand that these state court judges affect the environment. They affect wage and hour. They affect every aspect of what I call the dinner table issues. That’s mom and pop talking about we don’t have enough money to pay our mortgage. We don’t have enough money to pay the rent. We can’t afford food.

Instead these writers, I don’t know why this infuriates me so but every, this is Truthout for example, and she did a good job talking about the article, but they always return to these, to these social issues as if the social issues is what mom and pop cares about. Mom and pop could care, could not care less whether there’s something called a bathroom bill. You understand what I’m saying? Mom and pop care that this local judge can shut down a union, that this local judge can destroy the environment that the local judge can affect wage and hour issues. I mean that’s really what this is all about. So…

Farron Cousins:                  Well and also that the local judge could side with a corporation, you know, and say, okay, we’re going to give up this plot of land to the corporation. Yes, it’s right next to a school and a community center, but they really want to drill for oil right here. They want to pump their fracking fluids into this ground next to the school and I’m going to let them do that.

Mike Papantonio:             Yeah, but instead the writers, Truthout again, kudos to this woman who did this article, but again, she goes to the same place that all of these progressive writers go. What about the social? Yeah, these social issues are a problem, but what mom and pop care about when you talk about issues like this, how does this affect me? Not, not how does it affect a bathroom bill. And I think until they start understanding that the American, it’s, it’s like they never connect. It never connects to the American public at all.