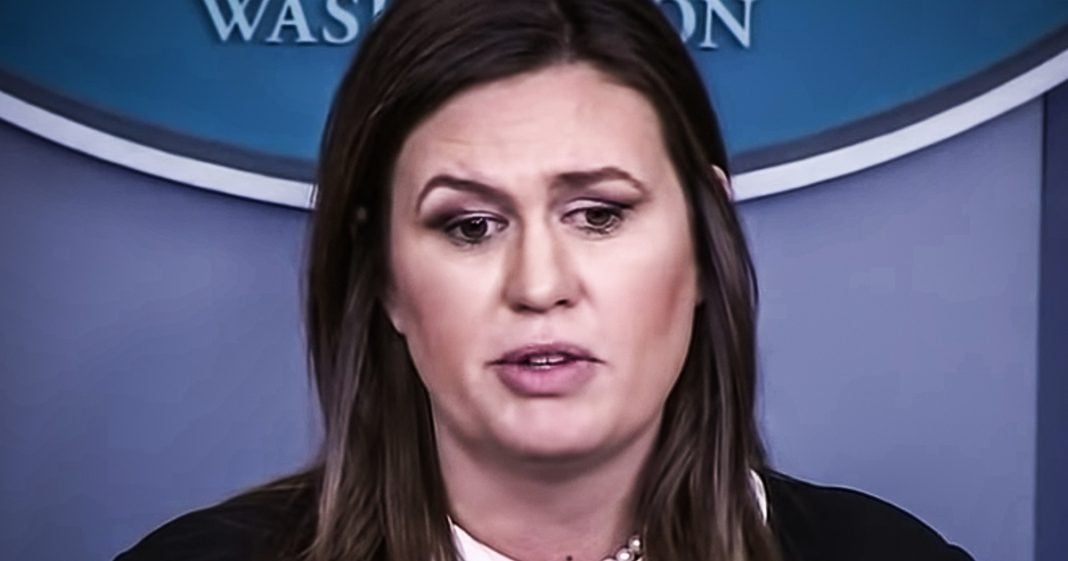 Sarah Huckabee Sanders has announced that she’ll be leaving the Trump administration at the end of the month, a move that most suspected would come much sooner. But even though she’s leaving us, she’s doing her best to squeeze in a few more lies before she departs, like her claim that she wants to be remembered as being very honest and transparent with the public. Ring of Fire’s Farron Cousins discusses this.

Well folks, the day that most of us have been expecting to happen anytime within the last 12 months is finally right around the corner. And that is the day that Sarah Huckabee Sanders will walk out of the White House for the last time it was announced yesterday that at the end of June, Sarah Huckabee Sanders will be leaving the Trump administration and returning to her home state of Arkansas. Now, the reason I say we expected this day, anytime within the last 12 months is because if you remember before last summer, reports were coming in saying Huckabee Sanders was gone at the end of summer and then it was, she’s going to be gone by thanksgiving. Then it was, she’s going to be gone by Christmas. And then those reports seem to die off because Sarah Huckabee Sanders herself just kind of stopped doing press briefings. Everybody almost forgot about her, but I guess she’s tired of doing nothing and wants to retire to do even less because God knows she’s not going to get a job anywhere else because she’s such a horrible lying human being, but she doesn’t see herself that way.

And in fact shortly after this announcement was made, she spoke at a politicos women rule event where she actually talked about what she thinks her legacy is going to be and here it is. These are her words. I hope that it will be that I showed up every day and I did the very best job that I could to put forward the president’s message to do the best job that I could to answer questions. But Sarah, you, you, you didn’t answer questions every day. In fact, you haven’t answered questions in a very long time and even when you were supposed to be answering questions, even then you didn’t actually answer the questions. You danced around it. You insulted reporters, you told them you got to go talk to, you know, x, Y or z over here. Cause I don’t know the answer. They don’t tell me things.

So No, you may have shown up every day. We don’t even know that because technically you weren’t even actually doing your job, which is to hold a daily press briefing. So we’re going to have to take it at your word that you were actually there at the White House. But no, let’s get that part of your legacy right out of the way to start with. You did not answer questions. You did not do the best that you could. You did a really horrible job. And if you go apply for another job, you don’t have to pad your resume because everybody knows what your resume is because it was available to the American public. But you continued and you said something even dumber to be transparent, honest, throughout that process and do everything I could to make America a little better that day than it was the day before. That’s sweet.

And it’s like a hallmark card, right? I just want today day to be better than yesterday and tomorrow to be better than today. Isn’t that what we all want for the world? Right Sarah? Except here’s the thing, you weren’t transparent and you weren’t honest. In fact, of all the words available to describe who you are as a person, the words transparent and honest don’t even come to mind. You were the exact opposite of that. You’re allying, obstructionist. That was your job. That was your role. Your duty to go out there every day to lie on behalf of your boss, obstruct honest questions about honest issues, to give half answers to insult reporters, to do whatever you could to not have to answer questions honestly and transparently. But you know what? Sarah Huckabee Sanders during this political event did actually address that because she knows everybody thinks she’s a liar, so she wanted to make it clear.

If she said the following year, she said there is a difference between misspeaking or not knowing something than maliciously lying. So there it is folks. I guess that’s her legacy. She wasn’t maliciously lying to us. She was just a complete idiot because she didn’t know the answer, but rather I guess than saying, listen, Hey, I don’t know. I wish I knew. They don’t tell me anything. She lied about it or she said something that wasn’t untrue because she didn’t want to look like she didn’t know Sarah. That is maliciously lying. If somebody asks you a question and you don’t know the answer but to try to answer it anyway so you don’t look like an idiot, your intentionally, maliciously misleading that person that that’s what that is. So you can call it whatever the hell you want to call it. Oh, I misspoke. I didn’t know the answer. I was wrong. Every now and then, at the end of the day, you chose to be wrong. You chose to give an answer on something you didn’t know or you chose to miss. Speak. These weren’t accidents on your part. This is exactly what you set out to do and that Sarah is going to be your legacy.