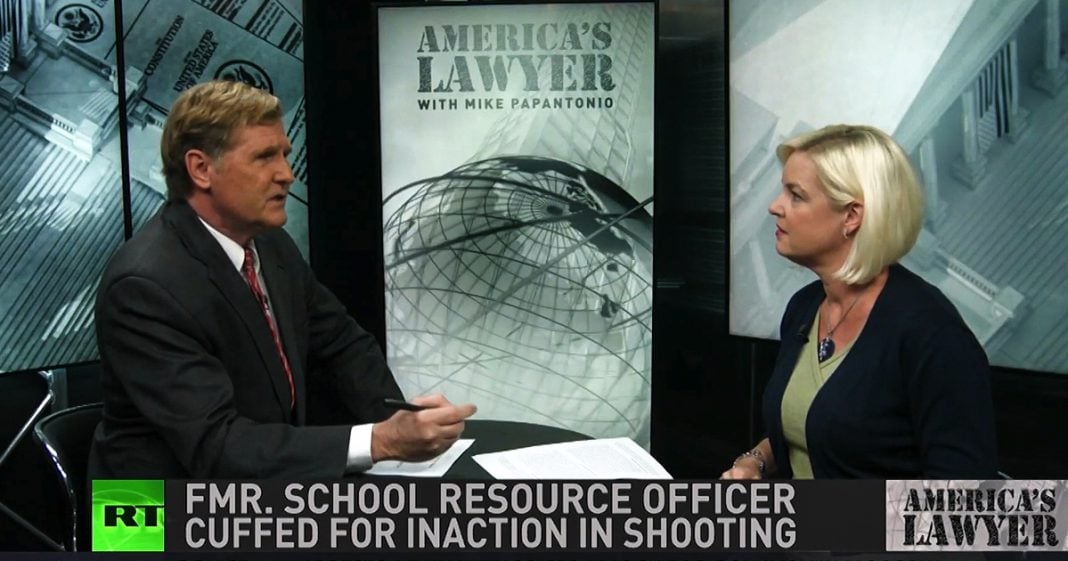 Via America’s Lawyer: Mike Papantonio is joined by legal journalist Mollye Barrows to discuss the case of former school resource officer Scot Peterson, and whether his failure to intervene in the February 2018 mass shooting, which killed 17 students and staff, is in fact criminally culpable.

Mike Papantonio:             The school resource officer who stood outside while a gunman opened fire at Marjory Stoneman Douglas high school now faces 11 counts, including child neglect and in connection with the deadly shooting. His attorney and the local police union plan on fighting the charges saying that they don’t apply. Legal journalist Mollye Barrows is here with me to talk about this. First of all, what is the basis of the charges? I looked at this, I think most of those charges have just no chance at all for standing constitutionally. Although there’s a couple that do. What’s your take on this?

Mollye Barrows:                Yeah, so that seems to be the general consensus. And of course this all stems from his lack of action, his inaction at the shooting in Parkland in February of 2018. So he is charged with a number of counts of child neglect as well as culpable negligence and one count of perjury. So the police union, his attorney are saying that these negligence charges or not going to stick because you have to be proven to be a caregiver and be responsible for someone in your care who is relying on you to keep them safe and in this case acting in their official capacity, he was acting as official capacity as a police officer. That doesn’t make him a caregiver, so he’s not held liable, which is interesting to me because it seems like as a public servant it’s part of your duty.

Mike Papantonio:             Some, what we’re going to have to do with this officer is get him close to the school on a regular basis to where he is somewhat part of the system. If the closer they get to caregiver, the better, the better chance they…

Mike Papantonio:             Okay, and so that’s what I’m trying to say. The closer you get there, you do fall into that caregiver kind of exception.

Mike Papantonio:             It’s going to be very discretionary. I think for a judge, as a matter of law, a judge is going to have to make a decision to either say, I can make this decision as a matter of law, that he doesn’t fall with the caregiver or he’s going to put it to the jury and let a jury decide, which is what I would recommend. Is let, let it go to the jury, let them determine whether he falls within that niche of caregiver or not. Look, Broward a coward. Okay.

You see, you cannot miss that photo where he’s standing there like a dult. Now look, we all have to question what would we do. But we, we, he made a choice. He signed up, he signed up for that job to put himself at risk and here you got children being shot. My understanding is he’s out there talking while he’s talking 77 shots are heard inside.

Mollye Barrows:                Close to it, 75, you’re exactly right. Yeah. So that’s where he, they get him on the perjury charge. As he said, when he heard the shots being fired, he thought they were outside. He said he only heard a few and he stood outside of the buildings when the shooting was taking place with another staff member and you can see him standing out there for 48 minutes.

Mike Papantonio:             Inescapable that they were going on. He knew exactly what was happening.

Mike Papantonio:             Brings us to, have other law enforcement been charged in, in, in similar cases or this case?

Mollye Barrows:                No, not in this particular case, but there was a lot of fallout with other officers. There was another sergeant, Brian Miller, who was also fired from the sheriff’s department for his lack of action. He, he arrived, he also sat in his car, took the time to put his bulletproof vest on. They said essentially stayed in his car, didn’t get on the radio and it was partially his responsibility to coordinate.

Mike Papantonio:             If the jury allow, if the judge allows this to go to the jury, I think he has enough to do that. It’s going to be a jury, it’s really a jury question because the question is, was he in the capacity of a caregiver? There’s legislation, there’s laws that say if that’s the case, then he maybe can be, be prosecuted under that. You know, I’m, I’m kind of for this, I, I’m for it in a, in a big way because if somebody says, this is what I’m going to do, I choose to do this, you know, I choose to carry a gun.

I choose to put myself in harm’s way there. There, there are police every day that put themselves in harms way. Every day you read some extraordinary story about a police officer that goes well beyond what you would expect on behalf of, of people to protect human life.

Mollye Barrows:                Well, Sheriff Israel, who was overseeing the Broward County sheriff’s department, DeSantis, our governor removed him from that position in January. Bringing up to your point, for systemic failures throughout because there were a number of officers who failed to do their job, lack of organization, coordinating the scene. Even first responders were not even allowed into the building initially because they were still securing it even after the gunman had already been taken into custody.

So there was one point in particular that goes to what you’re talking about. They held him responsible, the Sheriff, for changing the wording of a policy in regards to an active shooter that basically gave deputies, by changing one word, he gave deputies the option of whether or not to confront an active shooter. They said, instead of saying they shall go in, it says they may go in. So that was one of the reasons DeSantis used to remove him.

Mike Papantonio:             Okay. You sign up, sometimes if you talk to these officers. I mean, look, they, I used to be a prosecutor. I, I know, I gotta tell you some of these officers, there’s not any way they would not have gone into that school and done what they were supposed to do.

Mike Papantonio:             They do it every day across, across this country. Here’s the problem. It all flows from the top. Okay. Israel at the top hires people that are much like Israel. That person then hires the next person. What we see in Florida and a lot of Southern, I don’t, I don’t guess it’s just Southern, a Southern problem, but it’s kind of a good old boy system. The good old boys system is, ah, you know, I knew your daddy, he coached the bay, the football team. You were a linebacker on the football team. Yeah.

You’ve, you know, you had straight F’s all through school. Come on, go to work with us. We know you don’t have any extra training. That’s not the norm. But when you see it, it’s like pockets and you see these pockets and that’s what Israel had. He had a bunch of nincompoops that all flowed from his personality, his character, all the way down to the bottom.

Mollye Barrows:                That he allowed this culture to exist. And then it resulted in just epic disaster when it came to the shooting in Parkland. And that’s essentially what DeSantis said. So there had been pressure on Sheriff Israel to resign. There had been pressure on Scott Peterson to do something and by the way, he retired. The only thing that he could potentially be, right after the shooting, he retired. So he got his pension, because of the perjury charge, if that sticks, he could lose that.

Mike Papantonio:             Perjury is going to stick. That’s my prediction. Mollye, thank you for joining me. Okay.