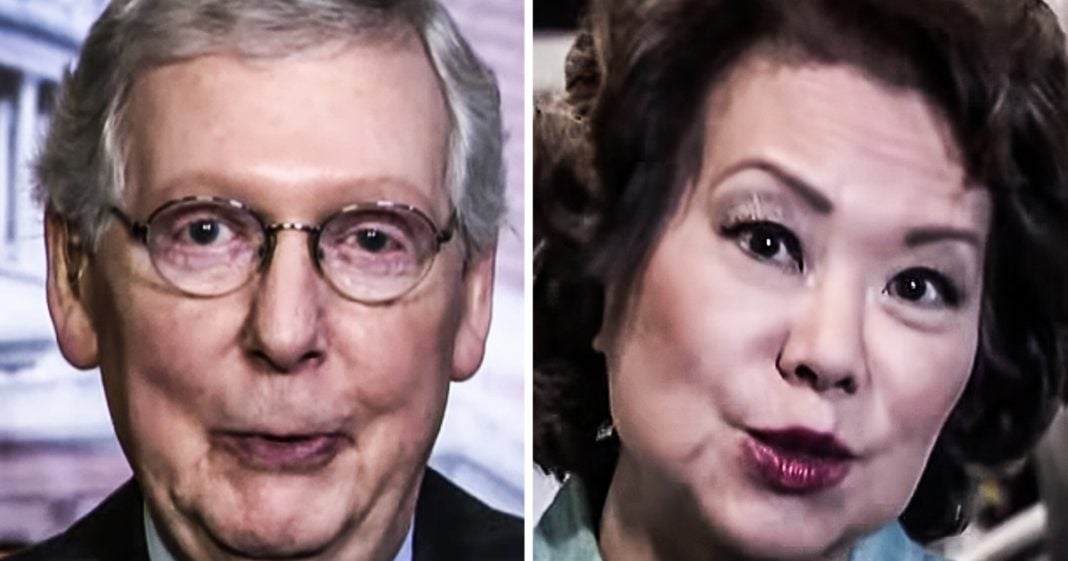 Democrats in the House of Representatives are taking the necessary steps to being an investigation into Transportation Secretary Elaine Chao and, by virtue of the investigation, her husband Senate Majority Leader Mitch McConnell. This could easily end Chao’s career, but it also has the potential to do enough damage to McConnell to get him out of office as well. This may actually be one of the most consequential investigations happening right now, as Ring of Fire’s Farron Cousins explains.

Well after several weeks of numerous different reports telling us that Secretary of transportation, Elaine Chao is essentially abusing her power and office. Most of it being abused to either enrich herself or to help her husband, Mitch McConnell, Democrats in the House of Representatives have finally announced that, you know what, we’re going to start investigating this because this actually seems kind of like the thing that needs to be investigated. Uh, Democratic Representative Sean Maloney actually announced earlier this week that a chairman, Peter Defazio of their committee has said, you know what, Sean, go ahead. You can start this investigation. Let’s get this going. They had been talking about it for days in advance and now Maloney has been given the green light. Let’s start digging. Let’s find out what’s happening now. There’s several different facets to this, uh, investigation or I guess different, you know, consequences. You could call them. First and foremost, before we get into those, let’s talk about what Elaine Chao has done.

There’s the fact that she lied about holdings and then ended up enriching herself by not divesting. Like she said she did. She only did that. I think a day or two ago, she finally sold the shares of the company that she was making a ton of money off of. Uh, there’s the claim that she was using her position to enrich her family and actually tried to get her family involved in a meeting that they would, uh, benefit from financially. And that meeting was ultimately scrapped after even people in the transportation department said, hey, probably not good to bring your family’s company into this talk that we’re trying to have with China because that’s going to really screw things up for you legally. And then of course you have the, uh, most recent, one of the bigger claims is that she’s actually steering contracts towards Mitch McConnell’s wealthy donors and Kentucky in order to help him win reelection.

So those are the issues. Here’s the consequences. And I fully support this investigation 100% regardless of some of these consequences. Here it is. Democrats actually didn’t want to start this investigation because believe it or not, as transportation secretary, you know, it may seem like a kind of middling title, something nobody really cares about. Elaine Chao has a lot of power because one of the things that American citizens complain about the most to their members of congress is infrastructure. Now I’ve got a pothole here, we’ve got a road collapsing here. We’ve got a bridge that’s falling apart over here. We need money back home in your district to fix this. And if you want that money back home and your district, who do you have to go through? You have to go through the secretary of the transportation department. Elaine Chao. So Democrats were leery about even starting an investigation because they know that they’re going to need money for their districts for these projects.

And if they investigate Elaine Chao, she’s going to get pissed off and not give them any money. You know what? Not a good enough excuse. But the other consequence it is actually a good consequence is that this involves Senate majority leader Mitch McConnell, because he happens to be married to Miss Chow. So any investigation that digs up any kind of dirt on Elaine Chao is inadvertently going to dig up dirt on Mitch McConnell. Especially since he is directly implicated in part of this investigation. He is the beneficiary of some of her potentially a unethical behavior, I guess we can call it now. Hopefully later on we can call it criminal. For right now, let’s just call it unethical. If these investigations do turn up some kind of evidence that results in Elaine Chao getting removed from office, there is a slim chance it could also result in Mitch McConnell being forced to resign and I’m talking like less than a half of a half of a percentage chance that that would happen for Mitch McConnell, Elaine Chao.