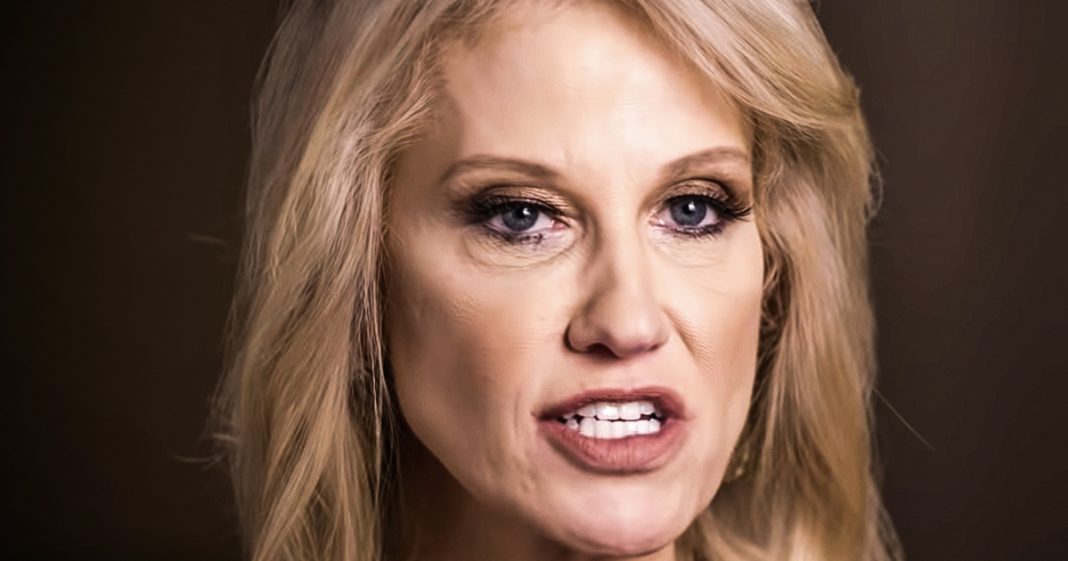 The Office Of Special Counsel inside the federal government has recommended that the Trump Administration immediately fire Kellyanne Conway because she can’t seem to stop breaking the law. With at least two Hatch Act violations under her belt, the OSC has described Kellyanne as a “repeat offender” and said that her repeated rule breaking shows that she should not be employed at The White House. Ring of Fire’s Farron Cousins discusses this.

With Sarah Huckabee Sanders leaving the White House at the end of June. There’s really only one woman left in Donald Trump’s life who is willing to do whatever it takes to defend him. And that woman is Kellyanne Conway, who just yesterday, in fact, shortly after it was announced that a Huckabee Sanders was going to be leaving the office of special counsel from within the federal government itself actually told the Trump administration that you need to fire Kellyanne Conway because she can’t stop breaking the law. Specifically, the office of special counsel was referring to the Hatch Act, which Kellyanne Conway has. It violated at least twice during her tenure with the Trump administration. Both of them had to do with the Alabama Senate race back in 2017 but there’s been other instances for which there is still an ongoing investigation. So the number of hatch act violations are likely much higher than that. But here’s the thing, the way the office of special counsel described Kellyanne Conway should in itself be grounds for removal from office.

They, they classified her, the direct quote as a repeat offender, a repeat offender. Meaning this woman knows what the law is. She knows she’s been in trouble for it in the past, but she continues to choose to ignore that law and therefore break it. Now, if you’re standing in front of any judge in this country and the prosecution describes you and is able to give evidence showing that you are in fact a repeat offender, the judge, the jury, everyone in that courtroom is going to have a lot less sympathy for you and you’re most likely going to receive a much harsher sentence. In fact, that’s actually how sentencing in this country works. You do something one time, Eh, you’re going to get a sentence. Maybe you know, unless you’re a rich white guy, then you get nothing. But anyway you do it a second time sentence can be a little harsher.

You do it a third or fourth time. It’s going to be even harsher each time down the road and that’s what they’re describing. Kellyanne Conway as she is this repeat offender. She is because we determined she did in fact break a law because the Hatch Act, guess what folks? That’s a law. She broke it by definition. That makes her a criminal, right? She may not be a convicted criminal, but she is 100% of criminal and that’s why the office of special counsel says she has to be removed from this administration. Immediately were unequivocal about that. Here’s the problem. Nothing’s going to happen, right? I Trump just lost his best defender, Sarah Huckabee Sanders. He’s not about to fire Kellyanne Conway. He wants to keep her around. She’s his number one now. She’s the one who’s going to go out on TV, makeup, all these alternative facts as she calls them, and Trump needs that because without the other mouthpiece, Huckabee Sanders, he’s only got one and if he loses that one, then oh my God. The only people he has left to live for him are pretty much all of the primetime host on Fox News and that’s not enough for this guy. He needs somebody by his side every single day that is willing to say the dumbest stuff imaginable, destroy their own reputation and future employee ability just to make Donald Trump happy. And Kellyanne Conway is one of the few human beings on this planet willing to do that without ever asking a question.