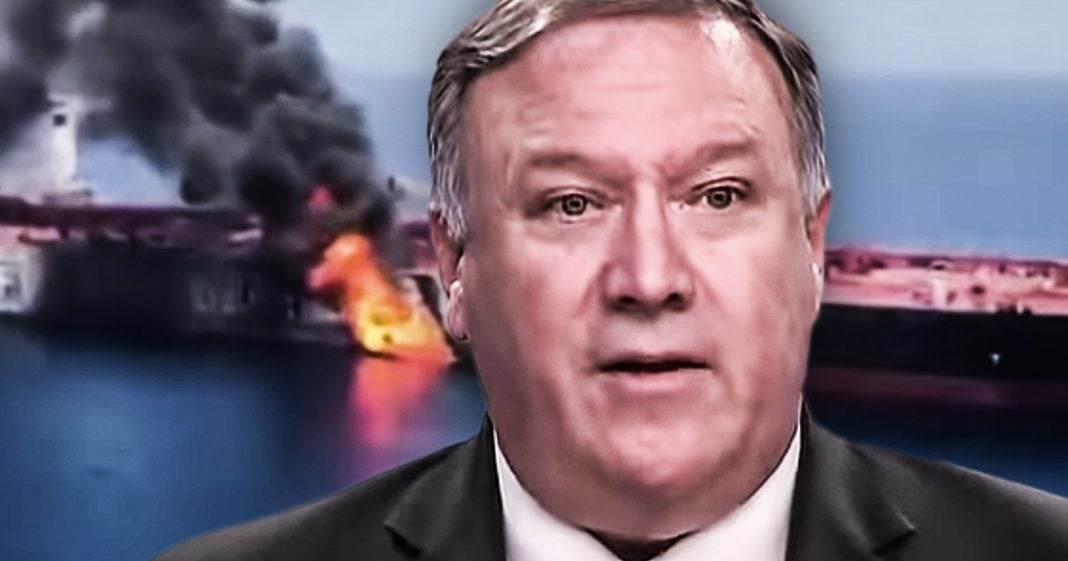 The owner of the oil tanker that was attacked near Iran says that the US is lying about the explosion and spreading misinformation to make it look like Iran is the guilty party. This sounds about right, considering the fact that this administration has been hoping for a war with Iran for quite some time. We’re seeing the Iraq War 2.0 play out right before our eyes, and Congress must step in to stop this administration from starting a new war. Ring of Fire’s Farron Cousins discusses this.

Well folks get ready for a rack 2.0 because that is exactly what is happening today. Yesterday, the Japanese owned oil tanker was attacked in the Gulf of Oman and immediately following that attack, secretary of state, uh, state, Mike Pompeo goes to a podium and he says, we are, we’re pretty certain that this was a ran, a ran is the country that attacked this tanker. And then later on Pompeo says, we’ll hold up. We’ve got some video evidence here and you can clearly see in this video evidence that you have a rainy, Ian’s planting a mine on the side of this tanker case closed folks, right? Because we know our intelligence community wouldn’t, wouldn’t falsify information, right? Except that’s exactly what already happened. And it hasn’t even been 24 hours this morning. The owner of that tanker, a Japanese business owner by the name of Yutaka Katada, came out and said, not in as harsh of words as I’m about to use, but this is the gist of what he said. The US is lying about this. First of all, the video though, shade they showed was actually in reverse. They weren’t putting the mind on the ship. Those were the rescuers removing it so that it didn’t explode and cause further damage. Second of all, the area where Mike Pompeo said, uh, the ship was struck. It was actually the opposite side and it came from the air, not from the sea.

So basically Mr Katada comes out and says, Hey, everything Mike Pompeo in the United States is saying right now that Iran allegedly did to my ship. It’s not true. They’re lying folks. They’re lying. And what’s great about this though, and I know that’s a weird thing to say, everybody knew Pompeo was lying about this prior to Mr Katada coming out and telling us this. I mean, a red is the one that said their military out there to rescue these sailors. 44 of them rescued from that ship by Irfan. That’s not exactly something that a country that’s trying to bomb you into oblivion would do. Not to mention the fact that at the time this bombing took place, you had the Japanese prime minister sitting with Iran’s leader, Ayatollah Ali Khamenei, trying to work out some kind of piece, trying to ease tensions, trying to get Iran and the United States talking again so that no conflict would happen or ran was open to it in Japan was trying to make it happen. So why on earth when you have the Japanese prime minister sitting in there in a meeting would have ran, send a crew out to attack a Japanese owned oil tanker. All right. It sounds like something out of a really bad movie like, oh, we distract the prime minister and bombed your ship. No, that’s not what happens in real life folks. What happens is that yes, these ships have been attacked. There have been attacks in the past.

Saudi Arabia is always quick to blame a ran. Everybody’s always quick to point fingers at around Pompeo yesterday was quick to point fingers at a ran. Well, guess what? They have zero evidence to suggest that ran did it. And the owner of the tanker itself says the United States as lying about it. So even if it was Iranians who ended up attacking that ship, there’s not even any evidence that the government directed it. It could have been erased, angry, well organized Iranians or Iraqis or Saudi Arabians. How about we wait until more information comes out, but more importantly, why should we even be getting all riled up and ready for war? When an oil tanker owned by a different country, thousands upon thousands of miles away from the borders of the US is attacked by somebody else. I hate to sound like an isolationist, but to be honest, folks, come on. That’s not something that we need to be involved in at. All. Right. That sounds like an issue between Japan and Iran in Japan. Doesn’t seem to think Iran is the one responsible.

Maybe they’re wrong, but I’m going to go ahead and side with Japan on this one and believe the fact that these war hungry psychopaths in the Trump administration Pompeo Bolton and the rest of them, that they’re trying to, once again, phony up information so they can start a another unwinnable and endless middle eastern war with Iran.