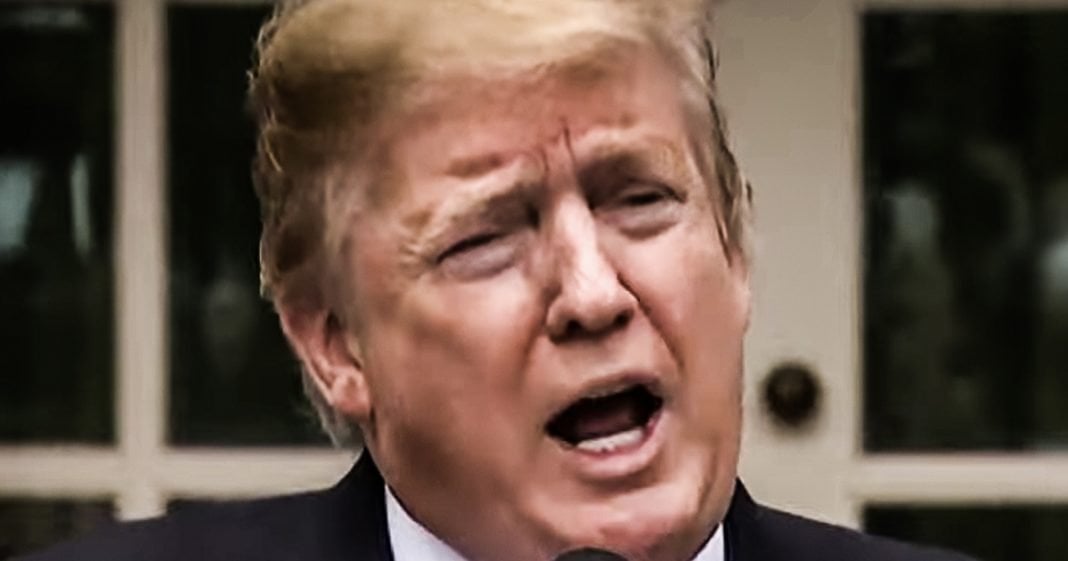 Donald Trump is absolutely terrified that Democrats are going to start an impeachment inquiry, and so he’s telling aides that he’ll do what he does best in that situation: Sue them. Trump has always used the threat of lawsuits to get his way, but this is one lawsuit that will be dead on arrival because he has absolutely no standing to sue them for doing what they are legally supposed to do. Ring of Fire’s Farron Cousins explains what’s happening.

According to a new story in the Washington Post where the author of this story spoke to at least 15 people close to Donald Trump, including current white house aides and some of his top outside advisors. These 15 people all said the same thing, and that is the Donald Trump is telling them he is going to sue the Democrats if they pursue impeachment. See what’s happening right now as the Donald Trump is absolutely terrified. He’s terrified that the Democrats are actually going to start an impeachment inquiry for the life of me. I can’t understand why Nancy Pelosi didn’t start at a month ago, but it is what it is, and here we are and everybody’s pushing her and she’s acting like she can’t hear them. So we’re going to have to talk a little bit louder to Nancy Pelosi because Trump only gets scared when he knows he’s screwed up. Trump only threatens to sue people to shut them up because he knows they’re going to expose something bad. Look back at the man’s history.

You know the people who have accused him of sexual assault, oh, he’s trying to sue them. Well, those lawsuits are getting thrown out and he’s losing. Donald Trump always resorts to lawsuits when he has nothing else to go on. You know, forget for a minute that any court in this country would immediately throw this lawsuit out cause he has no standing. Just the fact that he is even considering it, that he’s threatening it shows you how terrified he is. And that gives us even more reason to try to push speaker Pelosi even further to make these impeachment inquiries start now. I mean how he admitted to George Stephanopoulos that he’s totally down for some light treason. What more do you need? All right, we have the obstruction evidence. We have some of the bank fraud evidence. You start the inquiry, we can get the rest of it as we go in. The financial crimes alone are worthy of impeachment and Trump understands that.

He knows this wouldn’t end well for him. And that’s why he’s threatening a lawsuit that has no chance of survival. Now, as I mentioned a second ago, Trump, the lawsuit would get thrown out because he has no standing. And what I mean is that he has no grounds to file any kind of, you know, legal complaint against Democrats for doing something they are constitutionally allowed, able and willing to do. You simply can’t do that. There’s no remedy in the constitution for a president to sue a party that runs the house, that opens an impeachment inquiry that it doesn’t exist. You can’t do that. You would file the suit and it would likely immediately get tossed out probably even by your sick offense on the US Supreme Court. In fact, the only legal mind who seems to think this is a good idea is Donald Trump’s good buddy Alan Dershowitz, and we all know Dershowitz’s history and the fact that this man has zero credibility to speak of. So by all means, Mr President, go ahead and file your lawsuit, but just be prepared for that thing to get thrown back in your face because it will be one of the dumbest law suits the court system in the United States has ever seen.