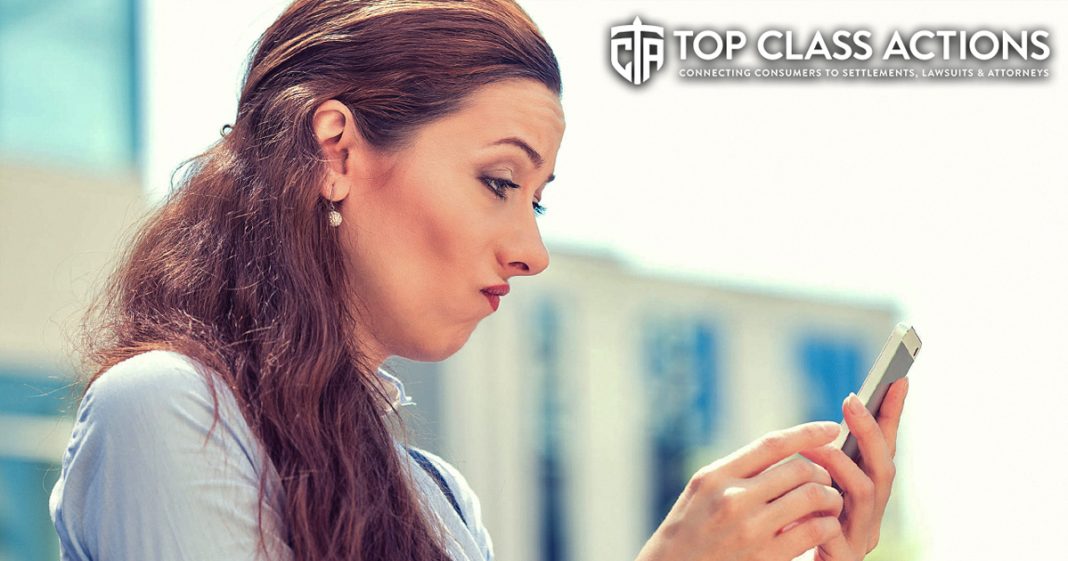 Several companies have recently agreed to pay out millions of dollars to be spread among the consumers that were harassed with their robocalls and nonstop texting. These calls and messages are more than just annoying – they are an act of bad faith by companies who are now having to pay the price for harassing consumers. Ring of Fire’s Farron Cousins discusses this with Scott Hardy from Top Class Actions.

Farron Cousins:                  Companies are getting more and more, I guess you would say aggressive in some of their direct marketing campaigns and a lot of those direct marketing campaigns involve text messages and phone calls, which most consumers who receive them are going to admit they don’t want them. And unfortunately in many instances, they didn’t even sign up to get these phone calls and text messages. And believe it or not, folks, that is actually a violation of the law here in the United States and that’s why corporations are having to pay out millions of dollars for spamming people with these calls and text messages.

Joining me now to talk about some of the latest settlements involving these robocalls and spam text messages is Scott Hardy from Top Class Actions. Scott, this is one I’m sure a lot of Americans have had to deal with. You know, the spam texts, the, the robocalling, all kinds of nonsense, blowing up your phone at all hours of the day. And now, between two of these settlements we’ve got here right now, there’s $7 million out there for consumers. Tell us what’s happening here.

Scott Hardy:                          Sure. The first one we’ve got is the Fingerhut text message class action and this class action alleged that Fingerhut was spamming people’s cell phones by sending out text messages, seeing if they wanted to go ahead and buy some of their products. Now this is a really interesting settlement. There is no minimum and no maximum that each claimant can get. I personally tried to submit my information here too cause I thought I might’ve gotten a text message from Fingerhut and they actually will check your phone number. So this is a great one.

You go online, you enter your phone number if you think you got a text message from Fingerhut and it will tell you right away, yes or no. If it’s no, sorry you’re out of luck. But if it’s yes, then you’ll be able to submit your information and hopefully get a nice check because this could be a check for $100 or it could be a check for $500 we don’t know yet, but it will pay out depending on the number of claims. So it’s just a nice little lottery issue of, hey, put in your phone number. Did you get a text? Absolutely test it out because this one could be hundreds of dollars.

Farron Cousins:                  Oh, definitely and, and that’s really interesting too, you know, because this way it’s not like you have to have a receipt or any kind of proof of purchase or you know, screenshots of your call and text message record. You go there, put in your phone number, if you qualify, great finish filling out the form and you sit back and wait basically. We’ve got another one here with Sagent Lending. Now this one’s a little bit more obnoxious.

You know, the Fingerhut was dealing with text messages. The Sagent Lending is robocalling, which we can all pretty much agree in this day and age, a phone call is a lot more bothersome than a text message. So tell us what’s happening with this one.

Scott Hardy:                          Yeah, sure. With the Sagent Lending unwanted phone calls, there were actually leaving people leaving people messages and they were saying, call us back during working hours. How annoying is that? Not only will they, are they robocalling you, but they’re leaving you a message, even if you answer the phone, you might not be able to talk to somebody. Holy Moly. But the nice thing is is that this one is again going to be paying out $1.75 million.

That’s the value of this settlement. And it could be upwards of $50 to $150 plus per claimant depending on if you qualify. So this one does not have that registry where you can go ahead and enter in your phone number. This one, you go online, you submit your claim for them, you say, yes, they called me. They left me messages and hopefully you’ll get a check in, in six to eight months.

It will also give you a follow-up email. We’ll send you an email saying, hey, we received your claim. So that’s helpful if you’re trying to track the different settlements that you’re claiming. You can also track that through Top Class Actions by following the settlement online if you create a login. But this one, you know, hopefully if you got that call from Sagent, you are going to be submitting that claim because these TCPA settlements are wonderful for consumers. Not only do they stop, make them stop calling, but it puts a big chunk of cash in their wallet.

Farron Cousins:                  Absolutely and, you know, as we’ve discussed before and as you’ve mentioned on Top Class Action, these actions by these companies doing these, the robocalls, the text messages, this is actually a violation of US law. So it’s not just that people are suing like, oh I didn’t want a phone call and I got one, I’m so annoyed. I want to sue you. It’s no, these companies are breaking the law. There is a federal law against this. And that is why this is happening right now.

And let me tell you just to kind of put a bug in your ear because I know you’re good about these kinds of things. I don’t know if this is happening to anybody else, but I’ve actually been receiving a lot of text messages recently from phone numbers I don’t recognize saying, hey, I’m, you know, so and so I’m a realtor in your area.

They give you your address and they say, I would like to talk to you about purchasing your home from you. I haven’t responded to any but the number of text messages like that that I’m getting, starting to pile up each time. It’s allegedly a different realtor. So Scott, I just wanted to put that on your radar. That could be something you and I ended up talking about in the future cause yeah, totally doesn’t seem legit. Realtors don’t have my phone number, so something to keep on your radar if you, if you don’t mind for me.

So you, we have attorneys that are investigating this. If you want to sleuth it out, reply, see if you can get them to say, well yes I am Bob from so and so and I am sending you these text messages. Oh wonderful. But of course we’re not going to go after the realtors. The realtors are just buying advertising. They probably don’t, don’t even know this is happening. We want to go after the marketing agency that’s actually sending out these text messages. Those are where we are going to be able to stop this practice and hopefully so you don’t get bombarded anymore.

Farron Cousins:                  Very good to know. And I hope everybody, if this is happening to you or if you’re getting any kind of text messages like that, follow Scott’s advice there. They know what they’re doing. They do this all the time. And if you think you qualify for either of the settlements we’ve discussed, follow the links in the description of this video, head to topclassactions.com get all the information you need about these settlements plus many more that a lot of consumers out there will likely qualify for. Scott Hardy, Top Class Actions. Thank you very much for telling us all this information today.