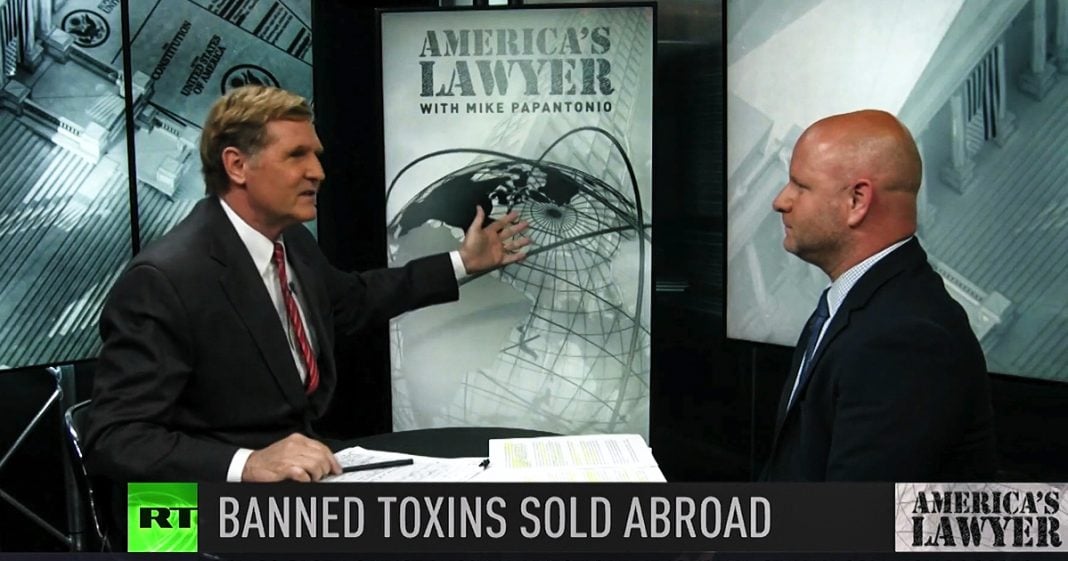 Via America’s Lawyer: Mike Papantonio and Trial Magazines Editor Farron Cousins break down the continued export of dangerous pesticides from the U.S. to developing countries. Despite being banned by the EPA, these spray-based chemicals kill nearly 350,000 people a year.

Mike Papantonio:             Corporations hate to let things like regulations and laws and regard for human life get in the way of their profits and that’s why they fall in love with foreign countries where they can get away with virtually anything. Joining me to talk about this is Farron Cousins from the Trial Lawyer Magazine. Farron, no surprises here.

The big chemical companies, they can’t sell their product in the United States because it kills too many people say, okay, we can’t sell in the United States. Let’s go to a third world country. Let’s go to a more emerging country economy where there’s no laws where there’s no regulations and bribery will work every single day. That’s what the chemical companies are doing right now, isn’t it?

Farron Cousins:                  Right in 23 different states across this country, we’ve got chemical manufacturers making pesticides that they know they cannot use in the United States. Their use is banned, so what they’re doing is they’re making these and they’re shipping them overseas.

They’re shipping them, as you said, third world country dictatorships anywhere where you can easily skirt regulations or pay off regulators and governments and that’s a huge profit center for them. I mean, we’re talking billions of dollars and this is not by any stretch of the imagination, a new phenomenon. This isn’t something they just started a couple of weeks ago. They had been doing this for decades, making it here, shipping it there to kill.

Mike Papantonio:             Okay, so they’ve got, they’ve got a couple of fronts. The first front in America is with legal bribery, which is just payola that comes from lobbyists, you know, spread enough around and you’ve got it under control. The second thing they do is take control of the regulatory agents. Go ahead and hire them. Tell them, you know, you’re making 150,000 today, come with us and oh by the way, don’t pay quite so much attention to this investigation you got going and we’re going to pay 400,000. The media easy, easy play.

They simply buy advertising on the television and the media doesn’t pay any attention to it. The lawyers, like people like us, we go to bat, you know, against these folks. And so what they tried to do, that’s their last vestige of protection for the consumer. So what they ended up doing is saying, you know, it’s a lot easier just to dump all this stuff in a third world country and create collusion with government by payoffs and bribery, a graft basically,

Farron Cousins:                  Right now what we’re looking at is about 13 tons per day of these banned pesticides are leaving the US and heading to these countries. And it’s causing, according to conservative estimates, 346,000 deaths per year, directly related just to these pesticides. They cause all forms of cancer, alzheimer’s, endocrine problem, hormonal changes in people and these are irreversible.

Farron Cousins:                  But another side of this, and this is a phenomenal report on it, but I think it needs to go a little further because obviously if we have these 23 states where these banned pesticides are being produced, there’s virtually no way that workers in these plants are not also being exposed to it, that the local communities may be exposed to it. I think that’s an avenue that also needs its own investigation because it’ll happen.

Mike Papantonio:             Let me bring it back home. Go to the supermarket. Supermarket with globalization, right? Democrats, oh, globalize, globalize, globalize. Well, here’s the end of globalization. Pesticide ends up in third world country. The stuff we can’t sell here, they use it on the crops. Where does it end up? Back in America. Go to the grocery store sometimes, see all these things with tags, the plum with tag on it. You know what banana with a tag on it and understand that that’s coming from a country probably where this has been dumped.

FDA makes no attempt. Less than 2% of everything that comes in this, less than 2% is ever even checked out by the, by the FDA. So there’s no, there’s really no protection here at all. It’s it’s, you know, there’s way to make it safe. There’s a way to do this affordable, but corporate America is always falling to the lowest point to increase profit and that’s what happened here.

Farron Cousins:                  And you know, just to add to this too, when it comes back here on the, the fruit and vegetables that we consume, you can’t just wash that off. It’s become a part of the plant in the growing process, much like glyphosate does. It gets inside of it and it’s there until you consume it and then it builds up in your body. We see the problems right now in the other countries, I’m sure they’re developing here in the United States, and this is something people have to pay attention to.

Mike Papantonio:             Okay, look where, I’m going to take a little longer on this segment. I want to take a little bit longer here because this is so important. What you’ve got is this becomes, it builds up as a toxin in the body.

Mike Papantonio:             You eat the same banana again and again, it builds up as a toxin in the body. The other thing they’re finding is in the fruit. It’s actually in the seeds of the fruit, so it’s not like you wash it off and everything’s okay. But this is the story that the FDA won’t tell. Media won’t tell this story. It’s amazing when you do a search on this to try to find out how all these parts are connected. You almost can’t find the story. Truthout did this story, I think it’s a wonderful story. They did, they did an incredible job.