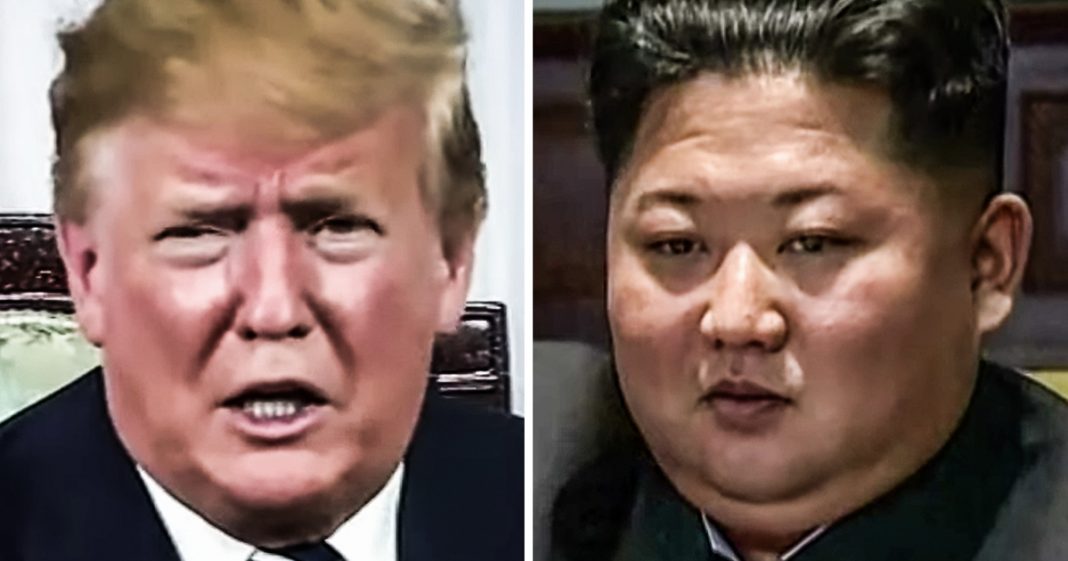 Speaking to reporters this week, Donald Trump had nothing but the kindest words to say about his new best friend Kim Jong Un, saying that he has “tremendous potential” and that “he gets it.” We ALL get it, Donald. You love authoritarian, bloodthirsty dictators. This is a trend we’ve seen since your first days in office. Ring of Fire’s Farron Cousins discusses this.

Donald Trump really, really loves authoritarian dictators across the planet. Yesterday, while speaking to reporters in front of a Marine Force One, Donald Trump heaped nothing but praise on North Korean dictator. Kim Jong on said, I just got another letter from this guy. Let me tell you, he gets it. He gets it. Donald Trump told us this man who we just found out actually murdered his half brother murders, political dissidents in his own country, forces people to live and some of the worst poverty situations we’ve ever seen across the planet just because he can while hoarding all the riches for himself. Donald Trump that thinks that he is a great and wonderful man. Here is Donald Trump’s exact quote. He says, I just received a beautiful letter from Kim Jong Un. I think the relationship is very well, but I appreciated the letter and he goes on and forgive me here. These are Donald Trump’s exact words and I know they are not going to make sense, but just listen for a second. I will say it again. I think that North Korea has tremendous potential and I’ll be there. I think that North Korea under his leadership, but North Korea, because of what it represents, the people are great. The land is great. The location is incredible. Between Russia, China, and South Korea. I think North Korea has tremendous potential and the one that feels that more than Oh and the one that feels that more than anybody is Kim Jong on. He gets it. He totally gets it.

Now, if you picked up despite the huge grammatical errors in this man’s a syntax, if you picked up on the underlying message there, it’s what we’ve been saying since day one. When Donald Trump walked out of his first meeting with Kim Jong on, what did he talk about back then? He talked about the real estate possibilities, how great it would be. Oh, you got beach front property here. Wow. You could do some great things. You build, build some good condos from goods apart, a good apartments, and then right here he talks about the land, the potential. Donald Trump wants to start buying up real estate in south going North Korea, excuse me. As soon as he leaves office, that’s the point. So he is willing to overlook all of the gross human rights abuses of a guy like Kim Jong Un. Again, just found out he murdered his half brother murders, political dissidents in his country every day. One of the worst human rights abusers on the planet. Absolutely giving Saudi Arabia run for their money in that arena. And Donald Trump says he’s a really great guy.

Not only that, but he then later went on to elaborate even more saying he’s not doing nuclear testing. You know, we stopped that. No, you didn’t. He’s not testing missiles anymore. Yes he is. He’s only testing short range missiles, which doesn’t concern. Yeah, but it concerns all of our allies in the region because they can still get hit by those missiles. Japan contradicted you on that just a couple of weeks ago, but you don’t care. You don’t care what this psychopath over there in North Korea is doing, as long as he opens up his country for you to swoop in and buy that real estate, and to be honest, may seem counterintuitive here. I hope he does, and I hope you go and invest billions of dollars in North Korea because I can promise you you’re going to lose every single dime that you sink into that country. Who wants to go buy a condo in an area where you may be thrown in prison for three generations because you criticized the leader who wants to live in an area where you can’t even afford to buy those condos because all the wealth is being hoarded by Kim Jong Un and his family, and as a military, yeah, that’s going to be an absolute disaster. But I honest to God, think that you, Mr. Trump, are dumb enough to sink all your money into that project. And to that, I say full steam ahead, bud.