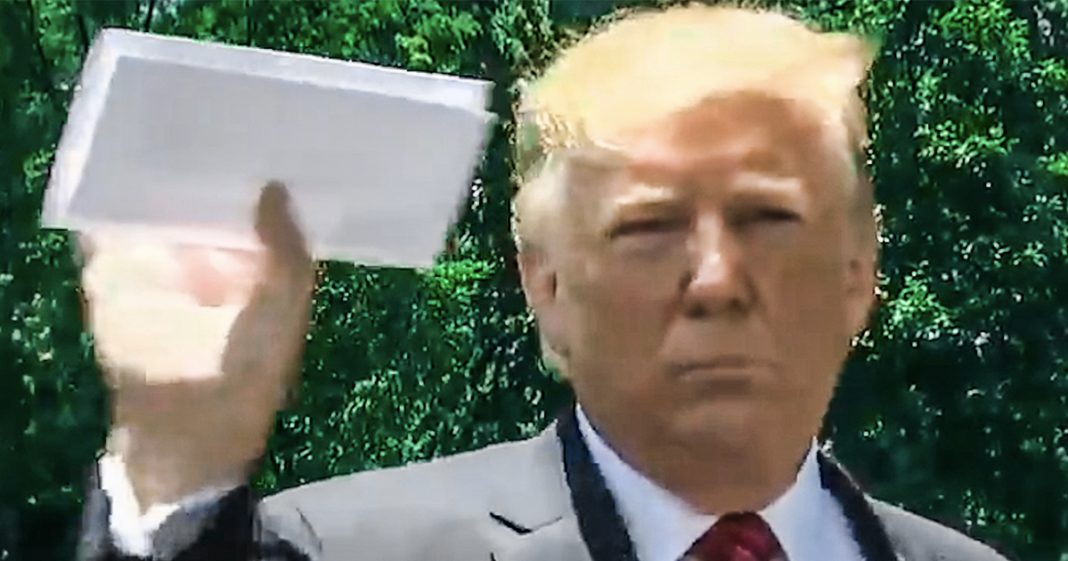 Donald Trump waved around a piece of paper yesterday in front of reporters, claiming that this sheet is part of a larger deal that he has reached with Mexico. The only problem is that Mexico says the deal doesn’t actually exist, effectively telling us that Trump is STILL lying about what’s really going on between the two countries. Ring of Fire’s Farron Cousins discusses this.

Farron Cousins:                   Speaking to reporters yesterday, Donald Trump told us and in fact kind of showed us that he actually has a deal worked out with Mexico, but he warned us. It’s so super top secret that none of us can know what’s in it. Here’s a clip

Donald Trump:                    That’s the agreement that everybody says, I don’t have. So no, because I’m going to let Mexico to the announcement at the right time from Mexico. They want to go through it, but here’s the agreement. That’s a very simple agreement. This is one page. This is one page of a very long and very good agreement for both Mexico and the United States. Without the tariffs, we would have had nothing. We had nothing two weeks ago. Mexico told us absolutely. I don’t know where the Times has got the story, but I think they got it probably for somebody that worked here and said how well they would go. Well, for a long time, for many years, people tried to get what we got in a period of a couple of days and they couldn’t get it. That’s the difference. They couldn’t get it. So Mexico, we’re getting along with them. Great. Marcelo and the president that all over. We’re getting along great.

Farron Cousins:                   All right, so let’s start with the most obvious, right? That’s the clip that you know, kind of I guess went viral. Uh, everybody looking at that said, we’ll hold up that, that piece of paper’s totally blank. There’s nothing on it. He just reached to his jacket, pulled out a blank piece of paper and then told us it’s a secret and we can’t see what’s on it. However, in the longer clip, Donald Trump does remove the paper from his pocket multiple different times. And during some of those you can see that yes, there is actually writing on it. Uh, there is in big letters, the word copy on it, so he’s not actually carrying around the original document. Um, it’s basically just carrying it around though as a prop. And some reporters with amazing cameras were able to kind of zoom in on some of the words and the words told us essentially the same thing that the Mexican government is telling us right now.

And that is that no deal is actually been finalized. And that’s the important part that most people are missing out of all of this. You know, everybody’s focusing on was the paper blank, was he lying about their being writing on the paper? Is he carrying around an original? No, no. You’re being distracted. The important thing is that the Mexican government for the second time in three days has had to come out and say, we don’t have a deal. Was this crazy man? Yet you had Mexican Foreign Secretary Marcello, a broad have to come out yesterday and say, listen, we don’t have any additional deals made. We talked on Friday. We came up with a couple of commitments, but there is no deal yet. Nobody has signed anything that’s official. We have said, we’re going to help, you know, try to stop irregular migration across our border, our northern border, the u s has southern border.

That’s about it. Donald Trump’s still out there saying, hey, we may have to put tariffs in there, but instead everybody wants to focus on a crazy man going, look, I’ve got a piece of paper, but you can’t see it. It’s crazy. Here’s the thing. Donald Trump is lying to us. That’s what we need to take away from this. The Mexican government themselves have said, no, there is no deal reached yet. We’re going to basically do what we’ve always done, which is try to stop this quote, irregular migration. We, we’ve always been working towards that, but as far as any kind of deal, we don’t have that yet. Nothing has been approved. We have to still talk about it amongst ourselves down here in Mexico and then come back to Donald Trump and say whether or not, you know, this is somebody that’s gonna work for us, but Trump ever, the liar has to come out there.

Pretend he is the great master negotiator that he claims he is it. Say, listen, we’ve made a deal. You can’t know what’s in it. You can’t see it yet. You got to wait a few days and the reason we can’t know what’s in it, the reason it is such a super secret right now is because it doesn’t even exist. So ignore all the little theories and jokes out there about Donald Trump, perhaps with a blank piece of paper or whatever it is, because that’s beside the point. The real issue here is that Trump told us that a deal exists. We’re not allowed to see it, but Mexico is telling us, nope, none of that is true. This man is once again for the second time in three days lying about what we’ve actually been negotiating. That is the big takeaway from this story.