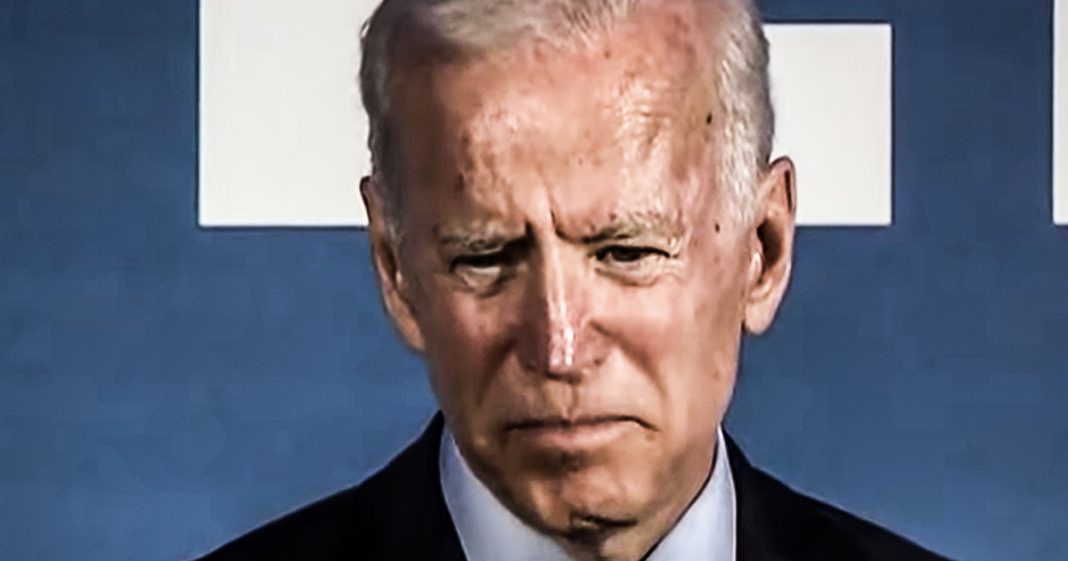 During a fundraiser earlier this week, Joe Biden again repeated his delusional talking point that Republicans will come around and see the light once Trump is out of office. That comment is stupid enough, but he went on to heap praise on Wall Street bankers and lobbyists. Who exactly is this man trying to get convince to vote for him? It obviously isn’t the actual public. Ring of Fire’s Farron Cousins explains why Biden’s campaign needs to end.

You know what’s really interesting to me is the fact that Joe Biden clearly does not want to be the next president of the United States, which again, I find odd because with the exception of Mike Grovel, everybody running for president on the democratic side, you could tell they do want to be president, but I promise you, Joe Biden does not want to be president of the United States. If he did, he wouldn’t be out there saying some of the dumbest stuff we have heard from any of the Democrats running for president yet. That is exactly what he is doing. On Monday evening, Joe Biden attended a fundraiser in Washington DC, held by lobbyists and mega donors. Of course, we’re, he made the outrageous claim again that Republicans are totally gonna wake up when Donald Trump is out of office and suddenly when that man leaves, they’re going to work hand in hand with Democrats.

It’s going to be just some big campfire Koombaya type situation in the House and Senate. Everyone’s going to be working in perfect harmony. We just got to get rid of that Trump because apparently Joe Biden wasn’t paying attention to anything that happened during the administration that he was a part of. He was vice president of that administration. Do do you not remember Merrick Garland? Do you not remember all the repeated attempts to repeal the affordable care act? Do you not remember the Senate under Mitch McConnell’s leadership while you were vice president? Uh, statistically being the most obstructionist in history? That was all before Donald Trump was even on the scene. Bud. Donald Trump didn’t exist in the political world and yet Republicans didn’t want Democrats to do anything. Mitch McConnell famously said in that meeting, our goal is for Barack Obama. It’d be a one term president. And suddenly you think that they’re only bad because Donald Trump is making them bad?

No, to be honest, it’s quite the opposite. The only reason that we got to a point in American history where a guy like Donald Trump could be elected is because the Republican party stooped so low, lost all their standards that a guy like Trump was able to rise to the top. Trump is not the cause. Trump is merely a symptom. You want to look at the calls, go back through the history. You got George W. Bush, you got Ronald Reagan, you got Mitch McConnell, Lindsey Graham, people in there for, you know, 25 30 years screwing things up for everybody, lowering the bar and the Republican Party. So Joe Biden’s an absolute idiot if he believes that Republicans are suddenly going to wake up and come work with Democrats. They didn’t do it before Trump. They’re not going to do it after Trump. But to be honest, that’s not even the dumbest thing that Joe Biden said at this little lobbyist fundraiser. No. Here, Ladies and gentlemen, is the dumbest thing that Joe Biden said. Wall Street and significant bankers and people, they’re all positive. They can be positive influences in this country.

Wall Street bankers, the the people who tanked our economy with bad investments, with scams that resulted in massive DOJ investigations and settlements, massive law suits where juries, you know, stuck into Wall Street as frequently as they could. There are positive force in this country according to Joe Biden. Why? Because Joe Biden wants their money, which means that Joe Biden, if he were to get elected president, is gonna do nothing to reign in Wall Street greed basically. We’re not gonna see any difference with Joe Biden.

None. None at all. Joe Biden should, if he actually wanted to be president, he would be running to primary Donald Trump. But when you are further to the right than any other person running for president under the Democratic Banner, then you’ve got a very real problem when you’re sitting there praising and industry than a majority of people in this country actually despise because of how corrupt and crooked they are. Then yeah, you’ve got a very real problem. And what’s even more interesting to me is who in the hell out there supports this guy? I mean, I know we see the polling that shows that he’s still in the lead. I know he’s losing a little bit of support, but he’s still in the lead. Who are these people that support them? I spent a good portion of time on social media, most of it on Twitter, and I looked through comments.

I’m not seeing people, even among the most establishment type who actually support Biden. They’re mocking him. They’re making fun of him. They’re talking about how stupid he is. So seriously, are these polls just that skewed towards people 70 years and older that it makes it seem like Joe Biden’s winning? Because honest to God, you go out there on social media, you go out there in the real world, you’re not meeting too many hardcore Biden’s supporters, and my best guess is that once we finally start these debates, Biden support is absolutely going to take, and by the time, let me go ahead and make this prediction right now. By the time the third caucus and or primary ends, Joe Biden will have ended his campaign because he’ll be back to polling in the single digits because everybody’s going to see what a corporate centrist he truly is and realize that that is not the direction this country needs to go.