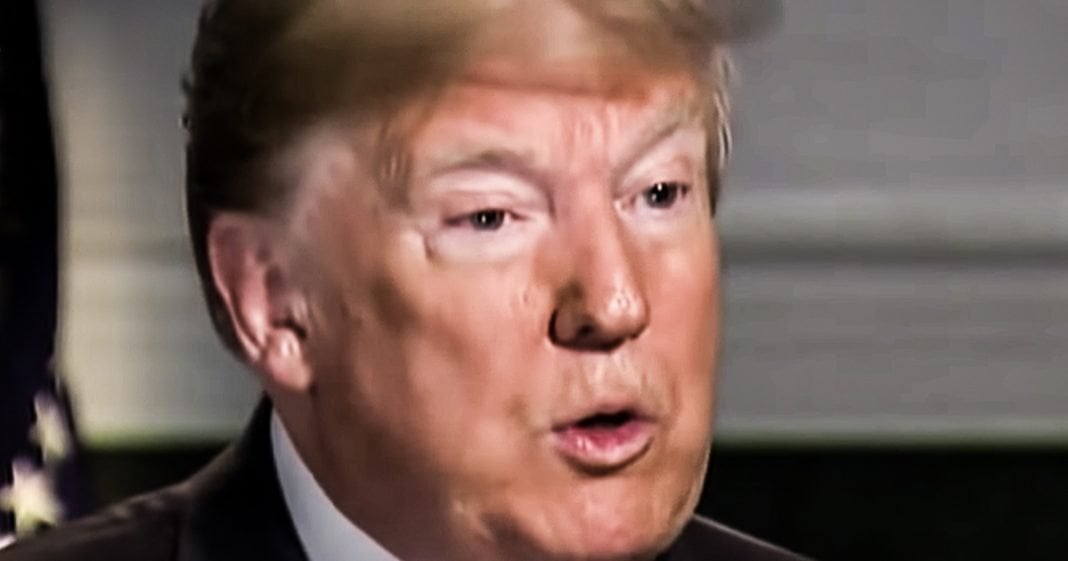 Donald Trump is obsessed with poll numbers, and that’s why each new poll showing that his approval rating continues to fall is so devastating to him. But he has a workaround – according to a new article in The New York Times, Trump has been instructing his staff to LIE about his poll numbers and to say that their internal polling shows him doing amazingly well. Ring of Fire’s Farron Cousins explains what’s happening.

We all know Donald Trump loves to brag about his poll numbers, but at the same time, we also know that basically since the day he was sworn in as president, his poll numbers have been absolute garbage. This is a man who in almost two and a half, four years of being president has never once broken the 50% approval rating mark among polling averages. Now, sure there’s been some conservative polls out there that once or twice if shown him over 50% and then at the same time that those conservative pollsters are coming out with those numbers. You have regular nonpartisan pollsters like you do today telling us that his approval rating is actually 42% so you take the average still below 50 not once in his tenure as president has he broken 50 in polling averages and he’s actually the first president to hit that record. No other president by this point in their term had not hit over 50% approval rating.

So good job on that, Mr. Trump. But here’s the thing, folks, even though he’s tweeting out that his poll numbers are awesome, he actually knows that their garbage and his staff knows that their garbage and what’s more, their internal polling is also showing that Donald Trump is likely to not be reelected in 2020 if things remained consistent according to a new report by the New York Times. Donald Trump when presented with this information from his internal pollsters, came up with a clever way to increase his approval rating, lie about it, and tell your aides to lie about it. That’s actually what he told them to do. He said, when confronted with these poll numbers, claim that they’re not a real, that they don’t exist in that our own internal polling, even though it shows the opposite shows that I’m doing exceptionally well now, specifically the poles that are kind of making Donald Trump’s sweat right now are a series of 17 different state polls conducted by his internal pollster.

Uh, most of which show him trailing Joe Biden. Donald Trump is 100% certain Joe Biden’s going to be the nominee. So that’s the only one who is focusing on, but these 17 states are states that Donald Trump has to win in order to win in 2020 and he’s already losing most of them. And here’s the thing, we’re not just talking about, you know, oh, maybe a little swing state here. Texas is on the list. Donald Trump is actually trailing Joe Biden in the state of Texas, Pennsylvania, Michigan, other states like that that are pretty big swing states that could go either way. Showing Donald Trump going down in flames. He doesn’t win those states. He’s 100% not going to win reelection. But rather than let the media capture that narrative and say that he sucks and nobody likes him, and the polling reflects that he is instructing his age, lie about these polls according to the New York Times.

Now, would we expect anything different from this man who’s told over 10,700 some odd lies since being sworn in? Absolutely not. It’s what he does. It’s the only defense mechanism that he has. When everything’s going against him. He flat out just lies about it. That’s who Donald Trump is. That’s who Donald Trump has always been, and it’s who is always going to be. But the bottom line is this. He knows what the real poll numbers are, whether he wants to admit it to the public or not. He’s admitting it behind closed doors. He’s being told behind closed doors, but rather than doing something to actually help them, the American citizenry, you know, maybe stop being such a jackass. No, he’s saying, why don’t we just lie about the poll numbers and eventually maybe it’ll sort itself out. Good luck with that. In 2020.