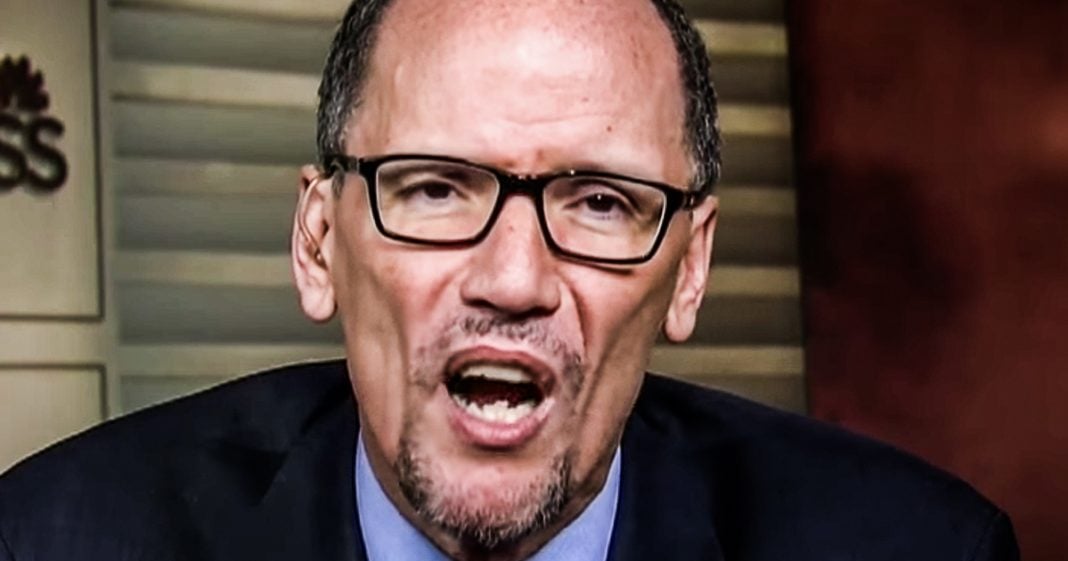 The Democratic National Committee has said that they will NOT be holding a presidential debate to solely talk about the issue of climate change, which just happens to be the biggest issue facing the entire planet. Instead, DNC chair Tom Perez called the idea “impractical.” How is it “impractical” to discuss the most pressing issue of our time? Or is Perez simply trying to protect certain candidates who are really bad on environmental issues? Ring of Fire’s Farron Cousins discusses this.

You know, I was wondering when the Democratic National Committee, the DNC was going to show their true selves in this Democratic primary, and to be honest, it really didn’t even take that long. DNC chair, Tom Perez has made it abundantly clear over the last few days that his party will absolutely not sanction any kind of debate that is solely focused on the issue of climate change. He called it impractical. It would be impractical to hold one of our doesn’t debates on the single biggest issue facing humanity. That’s impractical according to DNC chair Tom Perez. Let me read you exactly what Mr. Perez had to say about the idea of holding a debate about climate change and only about climate change. A lot of young people say we should have a single debate focused on climate change. You know, once you have a single issue debate than every debate leads to become a single issue debate in order to address the concerns.

So these debates, and we will have issue areas in debates including, but not limited to climate, but it’s just not practical for us to have one debate on democracy reform. One debate on voting and to that, I say, why the hell not? Would you rather each candidate have two minutes to talk about climate change and then you move onto the next topic? Or would you rather have everybody sitting in there in a discussion about climate change for an hour and a half, then the next time an hour and a half on health care so that the voters can actually understand where a candidate sits. A two minute or minute and a half response is not going to be enough time for anyone in this country to learn where a candidate truly stands on an issue. And that I think is why Tom Perez doesn’t want to hold single issue debates because there are a hell of a lot of candidates out there, right? And most of them have no idea where they stand on these issues. And they certainly couldn’t talk about it for, you know, 10 15 minutes at a time. You know who I’m talking about. People like Joe Biden, people like Beto O’Rourke, people like Hickenlooper and all those other Delaney folks that you forget, Hey, I forgot you were even running. But you know who could talk about those issues for a very long period of time, even if there was nobody else there.

Bernie, Warren, Gabbard Yang, they could talk about it because they do talk about it. Those folks are great on issues. Everybody else, not so much the great old platitudes. Right? And you can deliver some really kick ass platitudes with a minute and a half response, but you can’t lay out a policy. You can’t even get into the heart of the policy. You can start talking about it, but then you get cut off, then you’ll look like an idiot. Right. And we certainly wouldn’t think that the DNC would want to structure it to where some of the candidates who are better candidates, but not establishment candidates with look like idiots, would they? I think yes, they absolutely would. And I think honest to God, that’s what we’re looking at here. Tom Perez understands that this election has to be about issues. That’s what people want. And when you look at issue polling, not only do people trust Democrats more on almost every single issue, but they actually support the far left ideas, including Republicans. So yeah, issue debates would be great for candidates like Sanders and Warren and Gabbert and Yang, but they would be a complete disaster for these establishment darlings, like booker and Harris and Beto and Biden. That is why Tom Perez doesn’t want us digging deep into issues because some of those candidates that the DNC would prefer are so superficial and weak on the issues they’d run out of things to say. After about a minute.