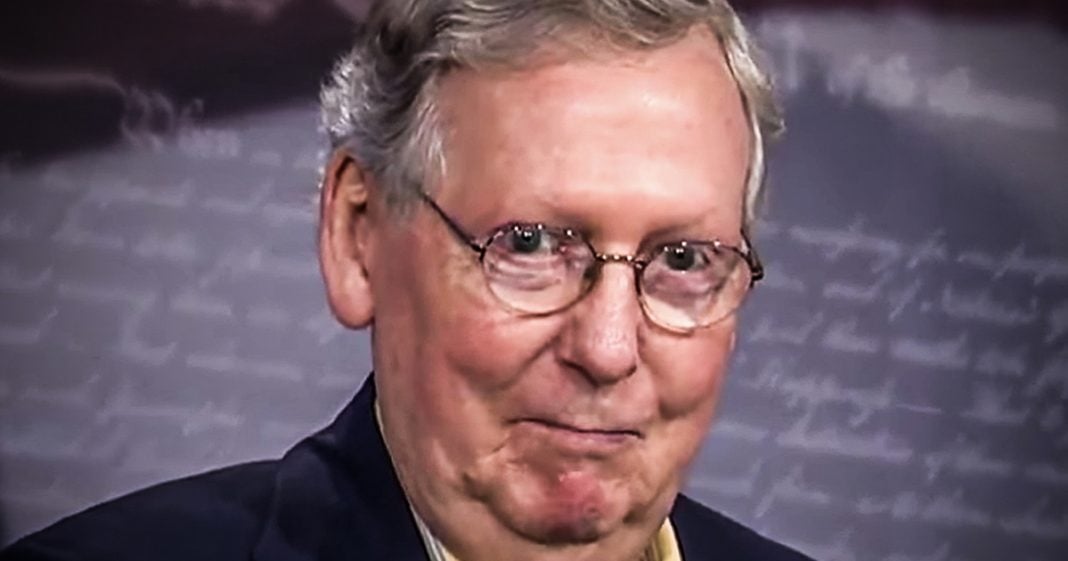 Senate Majority Leader Mitch McConnell keeps blocking bipartisan efforts to protect our election systems from outside interference, both foreign and domestic. And now we know why. According to a new report by Sludge, McConnell has been taking in a boat load of cash from lobbyists who represent voting machine manufacturers, and they understand that additional security is going to cost their industry tons of money, if not entirely dismantle their businesses. Ring of Fire’s Farron Cousins discusses this new report.

So far, Republicans and Democrats in the US Senate have been trying to put forth bills this year to basically increase cybersecurity for our elections. They want to put new regulations on voting machines. You know, the entire industry that currently really has no actual regulations on it. They want to make sure that we can audit our elections to make sure nobody’s gone in there hacked. It changed results that voting machines aren’t changing people’s votes after they leave because they’re not giving them a paper receipt. Yeah. Democrats and Republicans agree, Hey, we need to do this. Especially because Robert Mueller told us that our election systems were hacked. They did get into these. We don’t think they changed any vote totals, but they took a hell of a lot of information or at least had access to it. Not to mention the fact that about a year ago we found out that even 11 year old children were capable of hacking into these systems.

So for the love of God, could we please do something about it? We’ve got all these pieces of legislation, Democrats and Republicans support it. So what’s the hold up? The hold up is one man, one man by the name of Mitch Mcconnell, the Senate majority leader for the Republican Party. Mitch Mcconnell is refusing to allow any of these bipartisan pieces of legislation to even come to a vote on the Senate floor. And for a very long time I had assumed obviously that it was because every time there seems to be something screwy with a voting system, it always seems to help the Republican Party. And Mitch Mcconnell doesn’t want to make any waves. He doesn’t want to screw things up for his Republican brethren. So why would he bring, uh, bring these things to a vote when he knows it’s ultimately going to cost them votes? Well, it turns out the good folks over at sludge, specifically Donald Shaw, did a little more digging into this more than just my speculation and Donald Shaw found out another very good reason why Mitch Mcconnell is blocking these votes to put tighter regulations on voting machine companies.

As it turns out, voting machine companies, specifically esns and dominion voting systems who provide 80% of the voting machines in this country, they’ve actually ramped up their lobbying efforts as industries that are in trouble, typically do. And in addition to hiring all these extra lobbyists to go out there and just wine and dine and Schmooze with these politicians, they’re same. Lobbyists have also started donating money to Mitch Mcconnell’s reelection campaign. You know, we’re not talking about hundreds of thousands of dollars. It’s, you know, on the smaller side is Shaul points out in the piece a thousand here, a thousand there, 2000 over here, maybe another two, one, two, whatever it is. But for a guy like Mitch Mcconnell, that’s all it takes. He’s a pretty cheap date, right? You don’t have to pay $100,000 to buy off his vote, especially when it’s for something that you know is going to benefit the Republican party anyway.

A few thousand dollars should be enough to seal the deal. And apparently it has been. Mitch Mcconnell is corrupt to the core, quite possibly one of the most corrupt people in that Senate today. He is the reason we do not have better security for our election systems heading into 2020 every single intelligence agency in this country. He’s told us we’ve got problems. Every single independent study in this country has told us our voting system has some problems. People like Brad Friedman at Brad’s blog have been telling us that for what? Over 15 years now, and we didn’t listen back then. And for some reason, our politicians still aren’t listening today. Or at the very least, the one politician who could bring these bills to a vote refuses to listen. One, because any kind of vote tampering always tends to help Republicans. And two, they’re putting a few thousand dollars here and there into his campaign. So of course he’s not going to vote to put new regulations on his new found campaign donors.