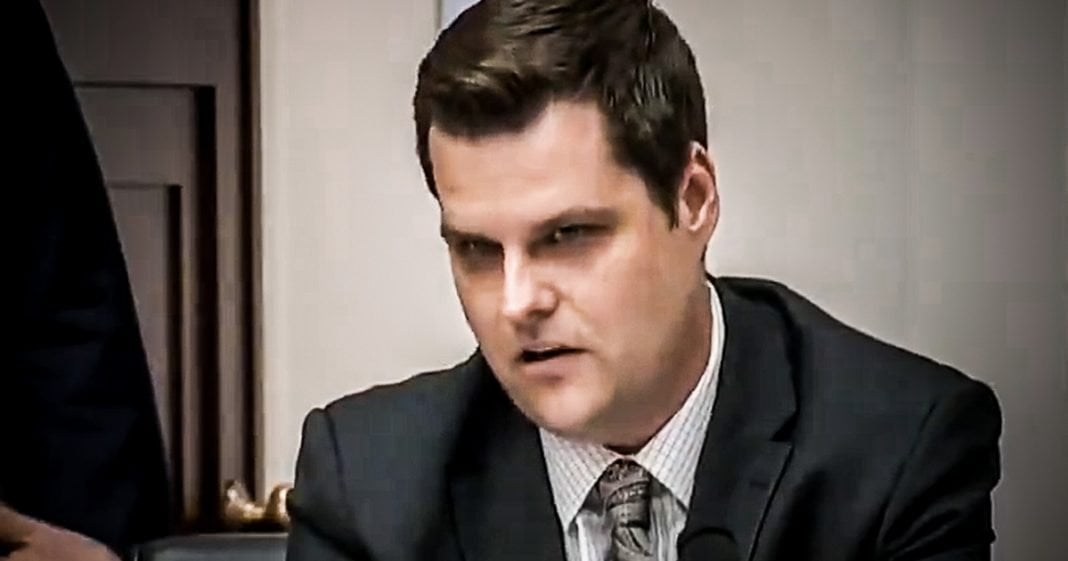 Republican Representative Matt Gaetz has never been viewed as an intellectual heavyweight, merely just a Trump sycophant who had daddy get him out of at least one DUI. But nevertheless, Gaetz wants to be known as the “conservative AOC”, and he thought he had a line of questioning for Watergate witness John Dean that would earn him that title. Unfortunately for Gaetz, it turned out like most of his other endeavors, meaning it made Gaetz, not Dean, look like a complete idiot. Ring of Fire’s Farron Cousins discusses this.

Yesterday, John Dean appeared in front of the House of Representatives to, uh, give some testimony in basically a little insight into obstruction of justice. And he said, you know what, Don McGahn, a former White House council’s doing right now with ignoring subpoenas. It’s pretty much obstruction of justice. Well, Matt Gates, the, uh, Republican representative who unfortunately represents my district here in Florida, didn’t want to have any of that. Right. He was super mad that John Dean was, he was even there. Jim Jordan from Ohio was super pissed that John Dean got to come in and talk about obstruction of justice. But it was Matt Gates and his line of questioning to John Dean that really grabbed the headlines cause you see, before we watch the clip, let me explain something real quick. Matt Gates has described himself, or at least said that he wants to be the conservative AOC. And as we all know from watching Ocasio-Cortez, her lines of questioning are absolutely phenomenal. They blow people away. They become viral clips that go around social media. And Matt Gates wants to do that. And he thought for sure he had a home run against John Dean and ended up owning himself in the most spectacular way possible. Here it is.

Do you have personal knowledge regarding the truth or falsity of a single material fact and the Mueller report? I think if you recall the first thing I said, I’m not here as a fact witness. You’re here to provide historical context. Exactly. And throughout history you accused presidents of acting like Richard Nixon and you make money off of it. Right? Not all presidents now, but a few more of those who do act like him. I pointed out, let me ask you this question. How do Democrats plan to pay for Medicare for all? I’m sorry. How do, well, I figured if we were going to ask you about stuff you don’t know about, we’d start with the big stuff. So do you know how they plan to pay for Medicare for all, uh, who? The Democrats or which candidate or can you be more specific? Let’s get specific to Nixon since that appears to be while you’re here, do you blow? Actually Nixon did have a health care plan. Good, good. Well, do you believe if we, if we turned the lights off here and maybe lit some candles, got Outta weegee board, we could potentially raise the specter of Richard Nixon.

I doubt that. Well, it seems, you know what’s great is that everybody there laughed at Matt Gates when John Dean, I actually was able to answer that question. We’ll let’s talk about nukes lose health care plan. Yeah. Richard Nixon actually expanded Medicare. Richard Nixon actually had a healthcare plan, uh, that he wanted to put in place that would have mandated employers give you health insurance and it would’ve created government subsidies for self employed and unemployed people. Basically trying to make sure that everybody in this country had health insurance. You know, that’s actually far more progressive than what we have in place today. Nixon, hell, it was a horrible president, but he had a couple of good ideas apparently in John Dean wasn’t afraid to say a hold up a little boy. He did have a plan. Maybe you should have done your homework. Maybe you should crack a book every now and then. Matt Gates instead of a bottle. Maybe that would help you do your job a little bit better of a Matt Gates hasn’t one to wallow in self pity for too long. He dusted himself off and did what he does best. He went on Fox News to talk about the investigation, but of course not. The investigations have been Trump. No, this idiot wants more investigations into Hillary Clinton. Take a look.

The American people are sick and tired of a double standard that seemed to pay the yellow brick road to exoneration for Hillary Clinton when there were clearly crimes committed there, while at the same time casting these aspersions on Donald Trump without a basis as a result of bias. The only reason why we haven’t had people thrown in jail yet is because Jeff sessions did a terrible job as attorney general.

So what Matt Gates is doing here, which is what a lot of the people who just absolutely have an undying, cultish love for Donald Trump, uh, Trump are doing is saying these investigations and Trump or stupid, you haven’t found anything. Let it go. Meanwhile, we need to investigate Hillary Clinton. She obstructed justice. Whereas Trump’s has she colluded with Russia? Oh my God, you people are so dumb. Here’s the thing, I’m not even a huge fan of Hillary Clinton and it pisses me off every time you people, Matt Gates and Trump and whoever it is, make me have to defend her, but here it is. She testified personally on camera for 11 frigging hours, 11 hours. The investigations into her led to zero indictments. She did not, as Republicans claim, delete those 33,000 emails. The FBI was able to recover every single thing they needed because she didn’t delete them. They went in and made carbon copies of her systems and then took them back to headquarters to be analyzed, which is typically what happens in any kind of cyber security investigation. Educate Yourself, Republicans. This information is not hidden from the public. You can go out and easily find it, but Matt Gates isn’t the kind of guy that wants to go out and find information. He is the kind of guy that wants to go on TV and tell lies because for some reason he is absolutely 100% in love with Donald Trump, and he will do whatever it takes, even if it means disgracing the entire first district of Florida here where I’m currently sitting by showing what a disgusting, ignorant, suck up he truly is.