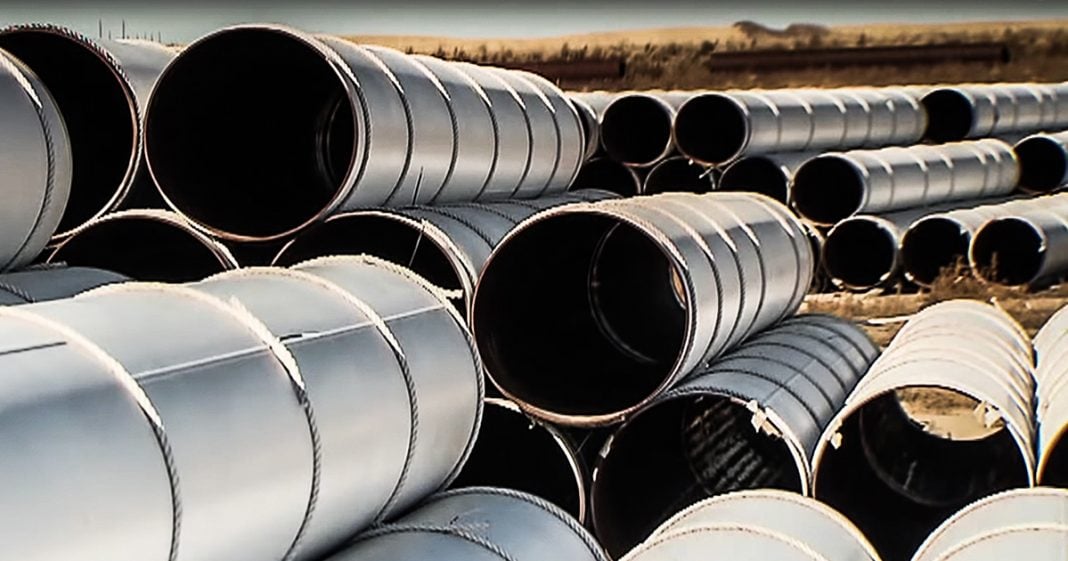 The Trump Administration is working on a new rule that could result in people who protest oil pipelines receiving prison sentences of up to 20 years. This is an egregious abuse of power that is only meant to preserve our dependence on fossil fuels, and to prevent the public from being able to exercise their First Amendment rights. Ring of Fire’s Farron Cousins explains what’s happening.

The Trump administration is working on finalizing a new rule that could put people who protest oil and gas pipelines in prison for 20 years. This new rule, which is being developed by the, uh, transportation departments pipeline and hazardous materials safety administration would make it a federal crime. If any of the following criteria are met for somebody protesting a pipeline, vandalism, tampering with or impeding, disrupting or inhibiting the operation of pipelines would be met with fines or potentially many years in jail. Under current law, damaging existing pipelines can lead to up to 20 years jail time, but those under construction or now a consideration as well, uh, as well along with disruption to pipelines. Um, so basically here it is right now. Yes. The rule is if you go out there and you damage a pipeline intentionally, I maybe you take a baseball bat to it.

Maybe you try to blow it up. Yeah, you’re going to end up with probably 20 years in prison, but that only counts for existing pipelines. If they’re out there just building something, there’s no fossil fuel running through it and you damage it, you’re not going to get as much of a a fine or anything like that. If you block construction workers from being able to get to the pipeline to start building it, you know, really not going to have too much of a penalty. They’re still far harsher than it should be, but certainly not 20 years in prison, which is what it’s going to be under the new rules put forth by Donald Trump’s transportation department being run by Elaine Chao, although she’s not in charge of that specific division. She is in charge of the entire Department of Transportation though. Here’s the thing, we’re seeing laws like this actually pop up all over the United States right now, you know, 10 to 20 years for impeding pipeline processes and that’s what we need to get at.

Yes, vandalism is wrong in any form. You, you cannot just go out there and destroy somebody else’s property, even if it is property that, uh, you know, is contributing to the destruction of the planet. Unfortunately you can’t do that. And we do not condone that, but they’re extending it to include the impeding of any of the processes. Which means if you and your folks go out there and you’re just protesting, but maybe the workers have to take an extra way to go around you, you’re impeding their ability to get to their, their job. You know, you’re making it hard for cars to come and go from the facility that could now be up to 20 years in prison under these new guidelines and under the guidelines that are being passed by states all over this country. That’s the problem. I understand. Vandalism is a crime, however, peacefully protesting is not in fact that’s actually protected by the United States constitution, but the federal government right now is trying to take that right away from you.

They want to put you in jail for 20 years for doing that, by claiming that it is impeding business as usual for these fossil fuel companies. That’s where you have to draw the line. I understand if you want to prosecute somebody for vandalism, but you cannot prosecute them, and you sure as hell can’t throw them in jail for 20 years for protesting the placement of a pipeline. But that is exactly what the state laws and now what the Trump administration wants to do with these people whose only goal is to actually protect the planet and stop these fossil fuel companies from profiting off the destruction that they’ve been causing for over a hundred years.