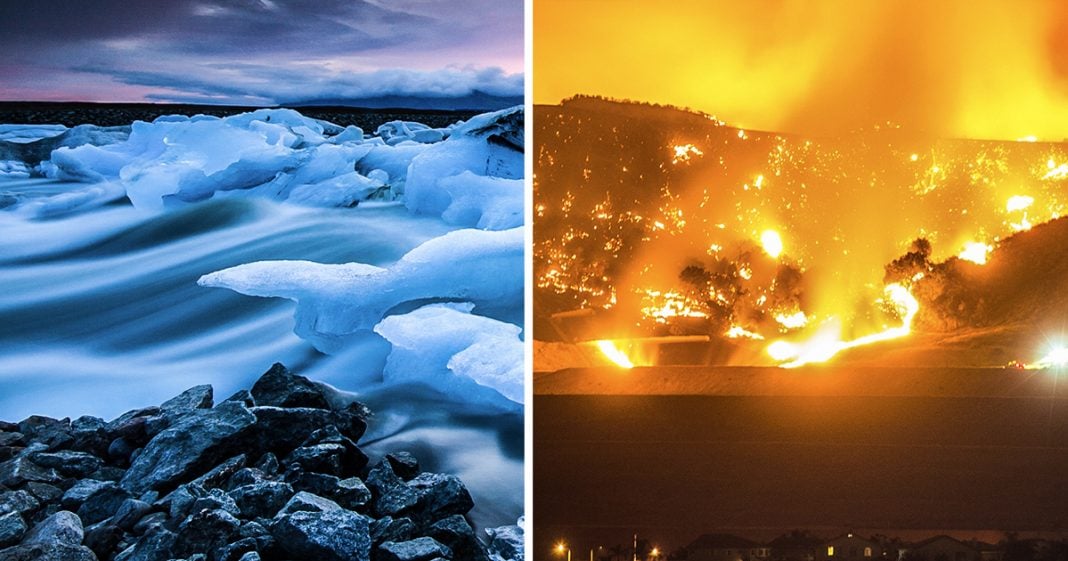 The Trump administration actually blocked an intelligence official from mentioning the dangers of climate change in a statement prepared for the House Intelligence Committee. This move flies in the face of more than a decade of warnings coming from both the military and our intelligence agencies, where they have explicitly warned us that climate change is a major national security threat. Ring of Fire’s Farron Cousins discusses this.

Last week, the Trump administration actually blocked a State Department Intelligence Agency from submitting a written report to the House intelligence committee talking about the dangers of climate change. In fact, this a memo or a letter or whatever you want to call it from the intelligence agency, actually listed the effects of climate change as possibly catastrophic for us here in the United States. In the Trump administration saw that and said, oh, hell no, we’re not going to let you submit this. This is not okay. And as you all remember last week, the House intelligence committee was hearing from some intelligence officials who were telling us that, hey, climate change as a threat to national security, it’s a threat to global security. And the Trump administration didn’t want any part of it. They didn’t want people to know about it. They wanted to continue to take their position that, hey, the plan today, we go through cycles.

It’s hot, it’s cold. Ah, you go out in the morning, it’s warm in the evening, it’s cool. Who knows what’s happening. We don’t want to listen to scientists because we think we know better and we love getting fossil fuel money for our campaigns. But this move here actually physically blocking this written testimony to Congress that said, hey, there’s possibly catastrophic effects of climate change headed towards the United States. This is a new low I, we’ve already seen this administration go through and try to scrub any mention of climate change from the EPA is websites, but right now what they’re doing is not just denying science, but they’re putting all of our lives in jeopardy. Essentially. Why? Because as the Pentagon has been telling us since at least 2006 and their first official report on the issue, climate change is a massive threat to national security. So the Pentagon’s been telling us that for 13 straight years, however, intelligence officials and military analysts actually said the same thing back to Ronald Reagan when he was president and George H. W. Bush when he was president.

So we had the first warnings of it from intelligence agencies back in the late eighties early nineties then starting in 2006 the Pentagon’s told us every single year, climate change is a massive threat to national security and the Trump administration is not letting them say that anymore. They’re not letting these people come out and say, hey, we have to do something about this problem before it threatens your way of life before it allows refugees to come in by the millions into this country and God knows we can’t vet them all. Obviously some a horrible group out there could take advantage of that, sneak their way in and carry out an attack. Those are the kinds of things that the defense department and the intelligence community that they’re worried about happening. Not to mention the fact that just having that many more people here in the United States, you know, regardless of whether they’re, you know, uh, altruistic or if they have bad intentions, just having that many more people is going to put a huge strain on our resources and create resource scarcity here.

Then we’re all in very significant trouble. That’s the more likely scenario than actually having these bad guys sneaking in and trying to do something bad. That’s very unlikely. What is incredibly likely is us just not having resources anymore because millions and millions of people lost their homes, lost their countries because we ignore the threat of climate change. Pentagon’s been telling us this for 13 years, at least, scientists have been telling us this for several decades. Exxon is known about it longer than anyone, and yet the Trump administration still refuses to take action and even worse refuses to admit that the problem even exists.