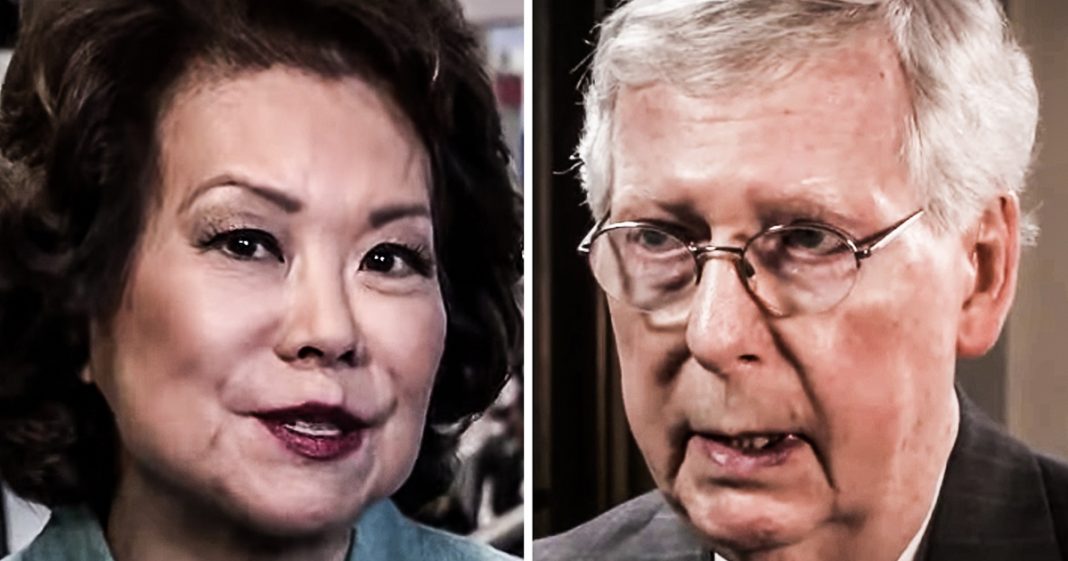 Senate Majority Leader Mitch McConnell and his wife, Secretary of Transportation Elaine Chao, should be immediately removed from office following a damning report showing that the power couple was using their positions of power to steer projects towards their wealthy campaign donors in order to ensure a successful reelection campaign. McConnell is corrupt as hell, and apparently that’s something that he has in common with his wife. Ring of Fire’s Farron Cousins discusses this.

Move over. Jared and Ivanka, there is a new corrupt as hell power couple taking over Washington DC and that power couple unfortunately happens to be Senate majority leader Mitch McConnell and his wife Transportation Under Secretary Elaine Chao. According to a new report by politico, Elaine Chao, through her position at the Department of Transportation, has actually been steering contracts to some of the wealthy donors in Kentucky that have given money to her husband. Here’s the way it worked. According to politico, you had a man by the name of Todd Inman, who is now actually Elaine Chao’s chief of staff, but she had appointed Mr Inman to be the intermediary between Kentucky, Mitch McConnell and Elaine Chao.

Mr Inman would find out which projects Mitch McConnell\ thought were priorities in Kentucky. You know, which areas did he need to shore up votes? Essentially, which companies did he need to get money from for his 2020 reelection campaign? That’s, that was in job. He would then take that information back to Elaine Chao who would then steer grants and contracts to these cities or companies in order to benefit her husband’s political career. And we’re not talking about one contract here. It may be another over there. Oh yeah, it’s little piddly. We’re talking about $78 million worth of grants and contracts that Elaine Chao at the department of transportation steered towards people and places that Mitch McConnell wanted that money to go to.

This is corruption at its peak. This is illegal. Oh, and by the way, it’s worth mentioning too that no other state had an intermediary like Mr Inman did for Kentucky and Elaine Chao and Mitch McConnell. None of the other 49 states in this country had somebody specifically working on that. Somebody going out there and saying, hey, your infrastructure sucks. Your roads, your bridges, they’re awful. What do you need from the Department of Transportation? What do you got for me? Nobody else got that except Elaine Chao’s husbands state of Kentucky. Now here’s the bottom line of this story and the corruption is much deeper than that. I don’t want to get into the minutia of the details and some of the companies involved. You can follow the link in the description of this video if you want to get all of those other details. I boiled it down to the nuts and bolts for you here, but let me boil it down even further.

Elaine Chao needs to be impeached and removed from her position immediately. Mitch McConnell should also be facing removal from office and not just in the form of a reelection. This is corruption folks. This is pay to play. This is essentially bribery on behalf of Mitch McConnell because do you know what Mitch McConnell will do? He would go out there after his wife, cause again this been going on for two and a half years almost. He then go to one of these cities, hold a little rally or conference with business owners, you know, maybe some citizens in a small city and say, hey, how about that grant? I got Ya. So he would actually go there and brag to them that he is the one who steered that contract towards them and they would applaud wildly. They would approve of him. They say, Hey, wow, Mitch McConnell really cares about his home state of Kentucky. He cares about the little guy here. He cares about taking care of us. He cares about local issues. No, he doesn’t. He cares about reelection. Any cheated in order to get those contracts to your city, to your company.

The only question at this point is that the voters of Kentucky actually care. I’m willing to bet they don’t. I’m willing to bet. Most of them will never know this story because they don’t want to know it because the local media, there’s not going to talk about it, but this is something that every politician in the state of Kentucky that wants to see Mitch McConnell gone. You need to be talking about this every single day because of Mitch McConnell is still in office and able to run in 2020 that’s going to be a big problem, but there should be enough evidence at this point because this is not the first story to detail this folks we talked about this months ago. It’s just getting worse from here. Mitch McConnell needs to be investigated. His wife needs to be investigated, impeached and removed from her office, and Mitch McConnell also needs to be removed from his, this is the most corrupt power couple in Washington DC today. And let’s not forget, that’s a Washington DC that now includes the power couple of Jared Kushner and Ivanka Trump. And when you hit a point when you’re even more corrupt than those two morons, then yeah, we’ve got a really big problem in DC.