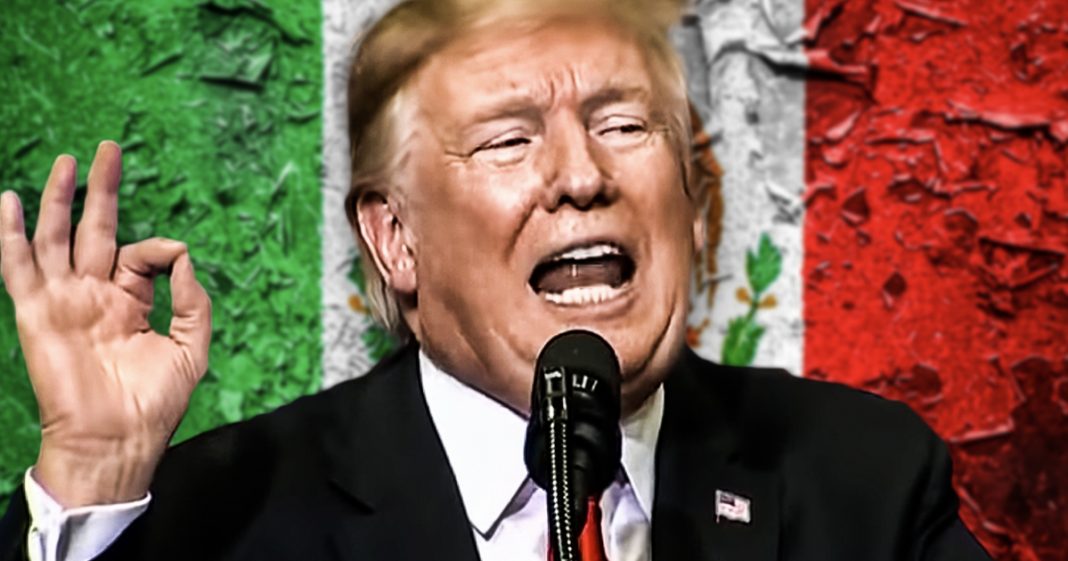 Donald Trump touted a new deal that he brokered with Mexico over the weekend, but it turns out the details of the deal aren’t exactly what Trump is claiming. In fact, according to officials in Mexico, the President is flat out lying about what the deal actually entails. Ring of Fire’s Farron Cousins explains why Trump’s constant lies are going to put our country in jeopardy with our allies and torpedo any deals before the ink even has time to dry.

Late Friday evening, Donald Trump and ambassadors from Mexico along with the ambassadors here in the United States, negotiators actually, uh, came to a deal. And the deal is the US is not going to be putting the tariffs on goods coming from Mexico into the United States. Donald Trump agreed to back off his threat to tax, to hell and back all of those goods. And that’s a good positive mood, uh, move. Excuse me. However, I do not feel that Donald Trump deserves any bit of credit whatsoever for this because he is the one who unilaterally made this horrible decision that would’ve tanked both economies and now suddenly that he’s backing off it. No, you don’t deserve credit for that. You can’t go in and say, I’m going to blow up a building and then expect people to praise you when you decide, all right, I’m not going to blow up the building. That that’s the kind of situation we’re looking at here with Donald Trump.

I’m not going to praise him for not doing the horrible thing that he personally decided he wanted to do. But nonetheless, as part of this deal, according to Donald Trump, Mexico’s gonna start buying a ton of our agricultural products, right? They gonna buy all our crops. We’re gonna send them down there. Farmers going to be doing greatly United States, which is awesome because they have been suffering under Donald Trump’s trade war with China. Here is in fact the all caps tweet that Donald Trump sent out. Mexico has agreed to immediately begin buying large quantities of agricultural product from our great Patriot farmers, farmers. Everywhere we’re rejoicing, they thought maybe maybe it’s going to help put us back on our feet. Maybe this will stave off bankruptcy for our farm. There’s just one little problem with it.

Mexico never said they were going to do this. According to new reports, officials from Mexico, including those who were part of the negotiations have now come out and said that was never a part of the deal. That was never even a thing that was discussed. Donald Trump essentially is lying to the American public about what we actually said, so now Donald Trump is out there attacking media outlets for reporting what Mexico was saying. Actually happen in the deal saying that, oh no, the fake news failing New York Times, which has now been family for many, many years. The slowest fail in history. Right, but Trump’s the one who’s lying. He is the one who is in fact fake news. Mexico has no incentive to lie to people here in the United States and say that, no, we didn’t agree to buy your agricultural products. That’s not how that works. Trump, on the other hand, has every reason to lie about that because again, he’s the one who’s destroyed these farmers’ livelihoods. He is the one forcing farmers into bankruptcy’s at rates we haven’t seen in over a decade, and it’s all 100% because of his trade wars. These are people in Midwestern states that Donald Trump knows he has win.

If he wants to run reelection in 2020 but he’s not going to do it if he keeps sending them into bankruptcy with his policies. So we gets on Twitter, makes a complete fabricated lie and sends it out to millions of followers. People who will take him at his word and say, oh, okay, great. He fixed the farming problem. Great. He’s taking care of these people that were initially hurt. He was right. We just had to wait it out, except for the fact that he wasn’t, he lied to you just like he’s been lying to you every single day. I think his total lie account now has over 10,700 in less than two and a half years as president, and you can go ahead and add this one, this proclamation in all caps, that Mexico is going to start buying our agricultural products immediately. Yeah, go ahead and add that to his list of over 10,000 lies that he’s told the American public.