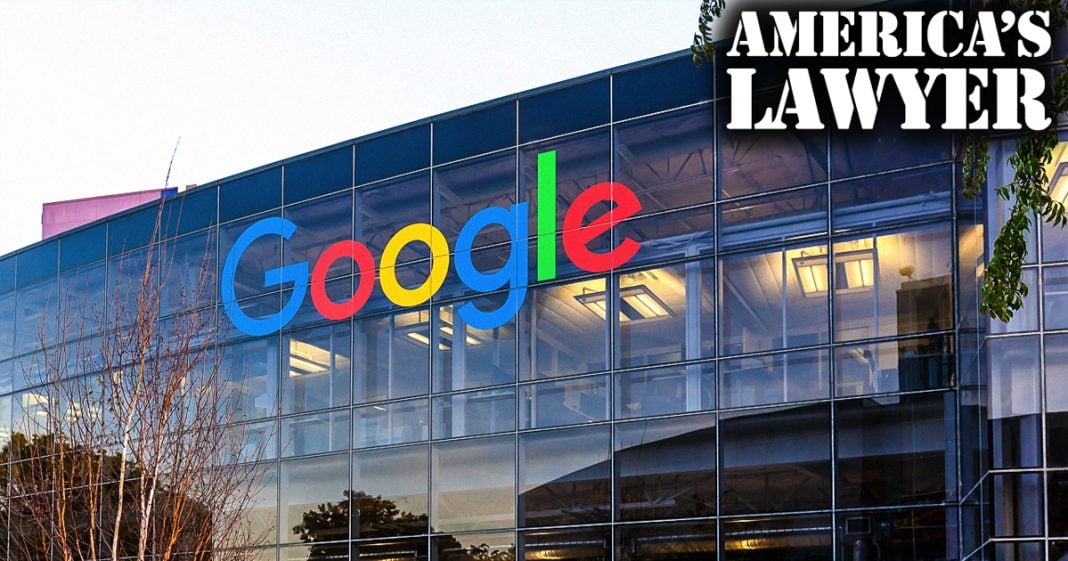 Via America’s Lawyer: Trial Magazines Editor Farron Cousins is joined by legal journalist Mollye Barrows to talk about Google hiring vastly more temp workers than full-time employees, and how this practice is pervasive among big tech firms in Silicon Valley. These part-timers often suffer from a lack of employee rights and are subjected to more abuse than their full-time counterparts. Farron Cousins fills in for Mike Papantonio on this episode of America’s Lawyer.

Farron Cousins:                  Google’s under fire for its hiring practices after the New York Times revealed, temporary workers now outnumber full time employees saving the company money they would otherwise spend on higher salaries and benefits. The news comes as the Justice Department gears up to investigate Google’s massive market power along with other high tech companies. Legal journalist Mollye Barrows is here with me now for more. So Mollye, how many temporary workers does Google have right now versus the full time employees?

Mollye Barrows:                About 20,000 more. So according to this Times article, they got an internal document and it showed a discrepancy of about 20,000. 121,000 temps and contract employees compared to about 102 full time employees. Of course Google has been working hard ever since their conception to be this innovated for or innovative forward thinking employer that is doing all things to make employees happy with high salaries, good benefits, all these other perks that they want to test out on their employees to make their working environment, you know, more comfortable and keep them happy.

But it turns out they save quite a bit of money, Farron, of course I’m sure that comes as a big surprise to you, by working through these temporary agencies. Because once they do work with a temporary agency, their benefit plans are different. They might not get paid as much according to some of these employees that the New York Times talked to and they talked to them on condition of anonymity.

They talked to about a dozen former and current temporary workers and they said they had to sign nondisclosure agreements but they also don’t get paid vacation. So there were some commonalities that there is this essentially a two tiered employment system within Google. And no matter how much you might want to get in and break into the fulltime ranks, they don’t make it very easy.

Farron Cousins:                  So the employees have protested, you know, this issue, the employment issues in the past. How did the company respond to that?

Mollye Barrows:                Yeah, not too enthusiastically. I mean they are in, but you know, that’s just a little bit of editorial on their reaction. But last year you had some 20,000 employees that walked out worldwide. They were protesting the handling of sexual harassment claims as well as just wanting more employment, empowerment overall. In a way to basically make their voices heard within the company and that didn’t get much response.

So then there was a letter that was sent, that was essentially anonymous, but said the same thing. We need equal pay and more opportunities. Can you do more to make that possible? And again, it was sort of crickets. And then finally there was a, another letter that they all sent. I guess it was quite a few that actually signed this particular letter after Google let go of 80% of a 43 person team that had been working, they were contingent workers. And so they said, hey, how you treated them wasn’t necessarily right.

We don’t like the way that was handled. And Google finally responded to that letter and they said, oh yeah, we’re going to change some of these policies and improve the way that we treat employees. But then you have this article that comes out and Google is like, well, we’re still working on it. You know, we didn’t mean to do that. We’re not hiring temporary workers to save money. That’s nonsense. We are really going to work to change this. So time will tell, I hate to be cliche, but this has come up clearly over and over again and Google says one thing, but yet the issue keeps coming up.

Farron Cousins:                  Right, and you know, obviously it is one thing when it’s just, oh, behind closed doors, the employees are getting mad about us doing this, but hey, nobody else knows about this. Now that people are talking about it that people know this. That’s typically when you start to see these companies react with the, ah, we, we got, we got to do something now because everybody’s onto us.

So, but at the same time, it’s not just Google. You know, how common is this practice of going for the temp? We don’t have to pay you benefits or, or good salaries versus the regular full time employees. How common is that today?

Mollye Barrows:                Well, according to some labor companies, it’s pretty darn common, especially in Silicon Valley where up to 40% of the workers at most technology firms are contract employees. And how much money they save according to this same labor company is about a hundred thousand dollars a year per average for an American job. So that’s quite a bit of savings. You know, they’re not, they’re on different benefit plans. It’s the a temporary agency that provides the benefits to the temporary worker and handles their vacation and that, that sort of thing.

So you know, it, it keeps Google’s hands clean, if you will, of that sort of expense. But they’re claiming that that’s not their goal, that they’re not trying to create a caste system that they want there to be equity. You know, that they want everything to be equitable and fair and employees have all opportunities to move ahead. But at the same New York Times article revealed some inconsistencies in the way that temporary workers who work side by side with full time employees are treated.

For instance, they might send out an email related to security, but the temp workers don’t get it. Only the fulltime employees get it or they’ll have a holiday party or perhaps an all hands on deck meeting and the temporary workers aren’t necessarily invited. So it becomes exclusive if you will, to be a full time employee. Not only are you making better money, you know, you’re, you’re in the, the ivory tower and the, and the rest of the, the worker bees are down below in the hive, you know, do doing what they can.

But it’s, it’s not unusual apparently to do this. And I don’t think anybody would necessarily fault, at least not a, a good capitalist would fault a giant for making these sorts of decisions to save money. But Google again denying that they’re doing this to save money, it certainly is contradictory to how they want it to be perceived as this, you know, innovative forward thinking company that does all these great things for the employees. And I’m sure they do. Those full time employees are probably pretty happy.

Mollye Barrows:                You know, for the most part, except for the ones that are walking out in protest over the handling of sexual harassment claims and that sort of thing. But, you know, it’s, it’s, it’s interesting though, it’s all happening at the same time that the justice department is gearing up potentially to investigate Google and Apple and Amazon and Facebook and they just divvied up jurisdiction between the Federal Trade Commission and the Justice Department to look into these companies because they are so powerful.

They are so massive that everything from the influence they have on the people who use these, these social media, social engines as well as the competition and what they do to squash competition. So the Justice Department says they’re now going to look into or that they have divided the pie. If they do look into any of these companies, the Justice Department says they will look into Google, they have jurisdiction over Google as well as Apple.

And the FTC would have jurisdiction over Amazon and Facebook. So it’s going to be interesting to see. This is just one more, you know, pebble, if you will, in the, in the jar that’s rising the water that perhaps, you know, the feds are gonna eventually come in and say, we really want to see what’s going on behind closed doors.

Farron Cousins:                  Yeah and it’s, you know, in my opinion, and I think a lot of people’s opinion way past due for these investigations to take place. Mollye Barrows, Trial Lawyer Magazine. Thank you very much for talking with us.