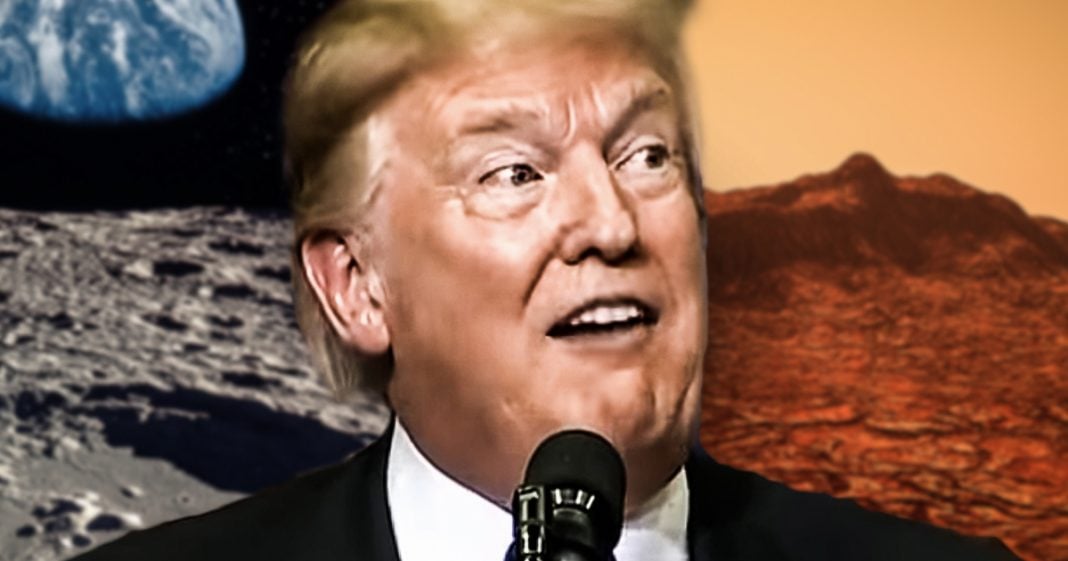 In a bizarre tweet late last week, Donald Trump made the claim that the US is NOT going back to the moon, but instead we’ll be going to Mars. He then added that the moon is actually a part of Mars, leaving many people confused. The President’s words may not have been very clear, but there is one thing that is absolutely crystal clear – This man is an absolute moron. Ring of Fire’s Farron Cousins discusses this.

We all know Trump is a moron, right? He’s not an intelligent human being. It’s likely he does think the moon is a part of Mars or that you can’t stop off at one and then go to the other. Who knows? But the important thing is that actually just three weeks ago, the man was touting the fact that we’re going back to the moon. And to be honest, we should be going back to the moon. We should be investing in science and NASA in going to outer space and exploring and learning. He was excited to go back to the moon.

So what happened? What happened in those three weeks? Why is he suddenly now saying, the Moon is stupid? I hate the moon. Sometimes you can only see part of it and it makes me mad. Well, according to the Guardian, what had happened about an hour before Trump sent this tweet saying, NASA shouldn’t be talking about going to the moon. We already did that. An hour before that Fox news host Neil Cavuto was on TV and he said, uh, NASA is refocusing on the moon. The next sort of quest, if you will, but didn’t we do this moon thing quite a few decades ago? Show you how to Fox News host Neil Cavuto who said like, Hey, we’ve already been to the moon. What’s the point? And then an hour later Donald Trump comes out a, yeah, we’ve already been to the moon. Why do we need to do this? Let’s go to Mars. Well, let me go ahead and explain something to both Donald Trump and Neil Cavuto.

Cause apparently neither of you understand this. It’s not like we spent any substantial time on the moon. Right? There are still countless scientific experiments, things that we could learn by going to the moon. Yeah, we did go once. Did we do everything we needed to do or are there still lots of things we could do? Plenty of things to learn if we go to the moon because the answer is yes, there is still much we don’t know. There is still much that needs to be analyzed. There are still countless scientific experiments that could be conducted on the surface of the moon, but now forget all that. Forget the knowledge. We could learn from that. Right, and let’s just focus on going to Mars, because as Trump tells us, the moon’s actually a part of Mars anyway.