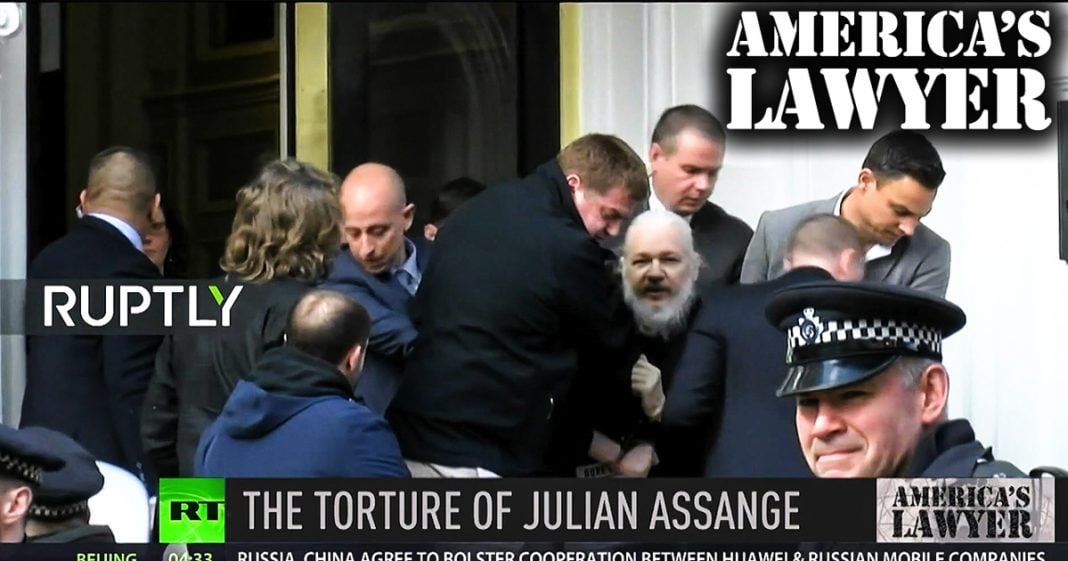 Via America’s Lawyer: Trial Magazines Editor Farron Cousins and RT Correspondent Michele Greenstein break down U.N. Torture Expert Nils Melzer’s assessment that Wikileaks founder Julian Assange displays classic signs of psychological torture. After being confined to the Ecuadorian embassy in the U.K. for seven years, he is now serving a 50-week sentence at Belmarsh Prison. Should he be vilified as a threat to U.S. security, or heralded as a hero for publishing materials leaked by U.S. whistleblower and former soldier Chelsea Manning? Farron Cousins fills in for Mike Papantonio on this episode of America’s Lawyer.

Farron Cousins:                  Jeremy Hunt, the British Foreign Secretary, recently announced that he was perfectly fine with a UN assessment saying that Julian Assange had been subjected to psychological torture at the Ecuadorian embassy. And of course, this came after the US issued superseding indictments against Assange, charging him with espionage. Joining me now to talk about these latest developments in the Assange case is RT correspondent, Michele Greenstein. Michele, start by telling us about these superseding indictments against Assange and, and what exactly is the US charging him with?

Michele Greenstein:              Will do, it’s good to be with you. The superseding indictment adds 17 new charges under the espionage act. Each of these is punishable by up to 10 years in prison. This is an addition to the one count of conspiring to violate the computer fraud and abuse act that the DOJ gave Mr. Assange in April. Now the first of these new charges is a conspiracy to violate the espionage act. And then the next 13 charges are all predicated on Assange coordinating with Chelsea Manning on the publication of this classified material, including the Guantanamo assessment briefs, State Department cables, and the Iraq rules of engagement files.

But the next three charges, charges 15 through 17, these counts represent the first time that the Justice Department has ever obtained an indictment with the espionage act charges based solely on the publication of classified material.

Farron Cousins:                  See, that’s what’s really interesting to me. Okay. The way that these indictments are written, it actually is leaving the door open for the possibility of prosecuting outlets who published these leaked materials or publish them in the future. So what’s going to happen with the press if this becomes the new precedent?

Michele Greenstein:              Right and I mean, this is why you had many thing that the reason the US DOJ had initially tried to get Assange on violation of the computer fraud and abuse act was because if it’s just about publishing, then CNN, the New York Times, Msnbc, these are all going to be liable for the same prosecution, which is why they tried to get Assange for conspiring to hack with Chelsea Manning into military files and like alleged that he helped her get a password. But thanks to the extradition agreement between the US and the UK, the US has to reveal all the charges.

So now we know that these other three charges are just about him publishing on the Internet. And like I said, these counts represent the first time a grand jury has obtained an indictment based purely on publication. And many would say, like you’re saying that this is a direct threat to the just the publication of news. And yes, it would really set a bad precedent, and really push us further down the line of mass media control.

This would allow the government, whether they choose to or not is really immaterial. This would give them the power to throw you in jail if you are publishing something that the government doesn’t want people to hear. So first, maybe it’s Assange, the next day, maybe it’s your blog or your Youtube channel. In fact, according to the Washington Post, the Obama administration actually dropped its case against Assange because of the way they foresaw it threatening press freedom.

Farron Cousins:                  Well, moving on real quick, the UN recently told us that Assange was actually subjected to psychological torture while at the embassy. So what can you tell us about that?

Michele Greenstein:              That’s right. It was the UN special rapporteur on torture who said Assange was subject to psychological torture for years. And we actually had Nils Melzer on, here on RT, on Going Underground. So let’s actually take a listen to what he had to say.

Farron Cousins:                  You know, there seems to be a lot of people in this country, both the left and the right, who can’t seem to separate their personal feelings about Assange from the actual charges against him and the impact that it’s going to have on media. So why do you think that that is? Why are there so many people out there who were rejoicing when Assange was charged by the US instead of saying, oh my God, this is a huge problem for the first amendment?

The corporate state is scared of losing the prevalence of their gatekeepers. I mean, when anyone can go online and report on things and publish things that US citizens want to know about, it’s a scary situation if you’re in power because people are no longer relying on the stenographers to, for power that are in the corporate press. And also many dislike him because Wikileaks chose not to redact sensitive information. And for this reason, a lot of people say, you look, he’s not even a journalist, but the fact is the first amendment, it covers everyone.

You could say, Julian Assange was wrong for deciding not to redact the names of certain parties. But the fact of the fact is it really does cover everyone. The question of whether or not Julian Assange is a journalist is immaterial. This is a moral distinction when it comes to the redaction of sensitive information. It’s not a legal one. So the fact that Wikileaks published the unredacted archive of US State Department cables is contentious for sure, but we have to separate our views on Assange’s morals from the legal precedent that this will set.

Farron Cousins:                  You also have a good portion of them. You know, they, they were out on social media after this came out and they were saying good, he deserves this for what he did to, to Hillary Clinton and the Democrats ahead of the 2016 presidential. So there is a lot, a lot of very bitter people, you know, that were in the Hillary Clinton fan club who are blaming him still to this day, even knowing what we know about all the mistakes made in 2016 as if he was the one who totally through the election.

Farron Cousins:                  So they’re actually cheering. Yeah. They cheered this even though it’s not even related to that, but they still wanted to get a couple shots in. But now something, something a little different is happening. You recently, you’ve had people like Rachel Maddow on Msnbc who finally admitted that this case could actually have a chilling effect on you as media. So do you think these outlets and, and personalities, people like Maddow, do you think they finally will, are willing to admit that they played a role in the vilification of Wikileaks and Assange here?

Michele Greenstein:             Well, let’s not forget that the liberal corporate press cheered for Assange, right? Until he went after Clinton. Like you’re saying, they were cheering for him when, when he went after the Bush administration and they went from that to cheering his arrest because he went after Clinton because Wikileaks showed that the DNC favored Hillary Clinton over Bernie Sanders. The Podesta emails showed Clinton’s paid speeches to the big banks. So the media reaction, I mean, it’s so partisan, it’s obvious.

The same thing is happening now. I mean, it’s just the latest chapter of the liberal media doing this because Rachel Maddow on Msnbc is, you can really say she’s just using this as anti Trump fodder. To your second question, do I think these personalities are finally willing to admit they played a role in the vilification of Assange? Absolutely not. I mean, I would compare the, I would make the comparison to the war in Iraq where it’s really not taboo anymore for the corporate press to say, oh, the Iraq war was bad. Right?

But are they admitting their role in the manufacturing of consent for the lead up to the war in Iraq? I don’t see that happening. I don’t see them doing things any differently when it comes to bombing Syria or sanctioning Venezuela or Iran, or whoever the enemy of the day is. Right? Because a lot of what these personalities do in the corporate press is not journalism. It’s public relations for arms manufacturers, for Big Pharma, for whoever it is.

But this guy gets dragged out as if he’s a murderer for the crime of publishing government secrets. I mean, if there’s a mouse in your kitchen and he’s eating the food on the floor, do you blame the mouse? No. You don’t blame the mouse. You look at, hey, there’s a hole in my wall. Right? And in this case, okay, the hole in the wall was Chelsea Manning. Guess what? She sat in prison for her crimes already. But on top of that, I would actually go a step further.

Why is there food on the floor? Don’t be leaving food on the floor. We should not be committing war crimes in the first place. I mean, all of this is really getting away from the fact that the kind of stories Julian Assange was telling through Wikileaks, were stories of US crimes. Right? We had documents related to the US destruction of Afghanistan.

We had US soldiers committing war crimes on our dime, right? We had US air crew gunning down Iraqi civilians, and you’re gunning down journalists. And again, we revealed that prisoners in Guantanamo Bay were innocent. So what does it say about the political system in this country when those who reveal war crimes are liable for more prosecution than those who commit them?