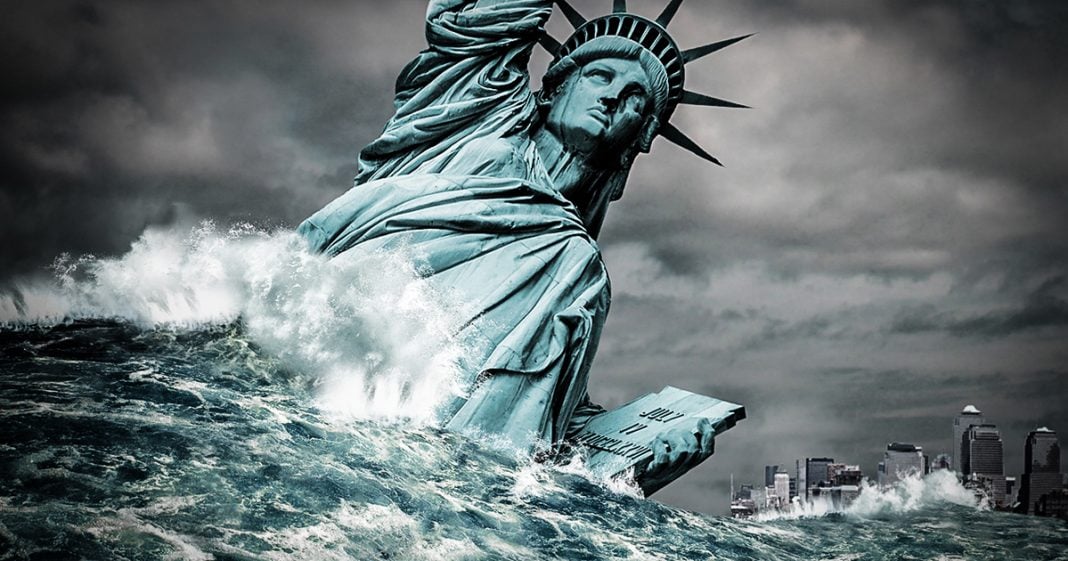 National security experts are once again warning Americans and politicians that national security can’t exist in the future if we don’t address the growing threat of climate change. This is the message that our intelligence communities have been sending us since at least 2006, and we are ill-equipped as a country to handle the flood of refugees and the deluge of disasters that climate change will bring to our country. Ring of Fire’s Farron Cousins discusses this.

On Wednesdays, several senior intelligence officials went in front of the House Intelligence Committee to talk about one of the greatest threats facing the United States today. They were telling us about a problem that basically if we don’t address this problem, national security for the United States doesn’t even exist anymore. We’re screwed if we don’t do something about this problem. According to the intelligence experts in our own government and that problem, unsurprisingly is climate change. Now, according to reports, most Republicans on the committee didn’t care about it, didn’t want to hear about it, and didn’t believe the assessments that were given to them by these intelligence officials thought they were over blowing it. Yo, this, this can’t be the way you say it. We’re not going to have a a refugee problem. We’re not going to have a migration problem. We’re not going to have all these other extreme problems that you’ve been warning us about since at least 2006 in fact, records actually indicate that even Ronald Reagan’s intelligence department had warned him on a couple of occasions that we need to keep an eye on climate change.

Same thing with actually George H. W. Bush. His intelligence officials said climate change is probably going to be a big threat for us in the future, but yeah, go ahead. Republicans on the Intelligence Committee and dismiss what these people have been telling us since the 1980s because that seems like a smart thing to do. The truth is that these men are right. These men who win in front of the Intelligence Committee from the intelligence agencies are telling us the same thing they’ve been telling us consistently since 2006 when they first put out their big massive report about climate change being a global threat to security and obviously a major threat, the biggest threat it said to a national security here in the United States because we can’t handle everything that it’s going to throw at us. Obviously across the planet as sea levels rise, there’s going to become places that are uninhabitable. A majority of the world’s population lives within a just a few dozen miles of shoreline all over the world. Suddenly those who live the closest, possibly even, you know, 10 to 20 to 30 miles inland. Those areas are gone. They’re underwater. Assuming we do not address the problem. All of those people who live in those areas have to move further inland. Maybe there’s not enough room further inland, maybe their island or their country isn’t wide enough for there to be an inland, so they’ve got to go elsewhere.

Or you know, Donald Trump’s telling us right now, oh my God, what’s happening at the southern border? It’s the worst thing in the world yet. Let me tell you what’s going to happen under climate change. It’s not just going to be the southern border. It’s going to be live. Literally every border around this country and other countries, people flooding in there is literally nowhere else to go. We allowed their home to go under water. They can’t go back to that. We can’t pump that water out. It’s just underwater now and we have been one of the worst polluters on the planet and it is our responsibility, believe it or not, to take care of these people. We’ve done this to them. We’ve allowed the world to do this to them. How the Trump administration actually removed climate change from a list of greatest threats to national security. They choose to believe that this problem is not real or that it doesn’t exist. The truth is the exact opposite.

And the sad truth is that we are ill prepared to deal with the consequences, but the hope is that we are more than equipped and ready as a population to actually prevent the problem before it even gets to that point. But unfortunately, if we have Republicans in power, in any branch of our government, action in the United States will never happen.